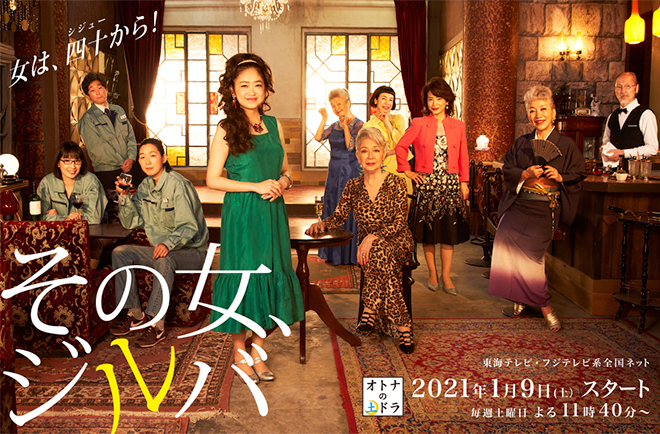 Story
40-year-old Usui Arata had worked as a salesperson for her dream company but right before her marriage, she is betrayed by her fiance. Not only is her engagement broken off, she is demoted to work at the logistics warehouse in the name of restructuring. Arata’s future is bleak. She has no dream, savings or boyfriend and wonders whether her life will end just like this? This day is her 40th birthday but no one celebrates it with her. The only thing she receives are emails from online shopping sites. On her way to the workplace from the company dormitory on a typical dull morning, Arata notices an elderly woman crouching by the side of the road. There is no one in this corner of the city to help her. It feels as if she is seeing herself 40 years later and she instinctively extends a hand to the woman. Arata has no way of knowing that this encounter will dramatically change her life later on. There are some unwelcome events awaiting her at the workplace. When she and Muraki Mika, a colleague who was also seconded to the warehouse, are attending the morning assembly, they are introduced to the new section chief by Hamada Sumire, the team leader of the Warehouse Department. He is none other than Maezono Makoto, the man who broke off the engagement. She is rendered speechless when he thoughtlessly tells her that they must be fated to meet like this again. On her way back, a stressed Arata happens to find the retro bar Old Jack & Rose’s poster recruiting hostesses. The condition is that applicants have to be over 40. Arata thinks this is a trap and cannot believe the hourly wage of 2,000 yen for a hostess. However, she decides to take the plunge and work here in a bid to change her life. She soon gets shocked by the difference in values. The average age of the hostesses at Old Jack & Rose is over 70. Taking the name Arara, she blossoms and begins to recover the important things that she had forgotten, as the youngest hostess in a space brimming with the vitality and energy of mature women.

Characters
Ikewaki Chizuru as Usui Arata (Arara)
She had been working as a salesperson for a large department store’s apparel section. But she is mocked for being an abandoned old woman and demoted to its logistics warehouse. She is at the turning point in life, having lost her boyfriend, dream and pride. Wanting to change her life, she walks into the bar Old Jack & Rose where she is teased as a vivacious young girl but there is no malice to this. Inspired by the brave women who built up the bar from nothing after the war, she starts to go through a dramatic transformation.

Eguchi Noriko as Hamada Sumire
The group leader at the warehouse where Usui Arata works. Unlike Arata and Muraki Mika who were seconded from headquarters, she is a permanent employee at the warehouse. She is curt and unfriendly but has pride in her job. She puts up a wall to the employees who quit soon after they are seconded to the warehouse.

Matobu Sei as Muraki Mika
Usui Arata’s colleague at the warehouse. Although she and Arata are the same age, she was dispatched to the warehouse earlier. She steadily built up her career during her time at the department store but after her secondment, she lost her passion for work and has endless insecurities about the future. She constantly worries about her mother who lives alone.

Nakata Yoshiko as Hanatomiyashiki Eriko (Eri)
A hostess at Old Jack & Rose who proclaims that she is 59 years old. She is a woman who lives for love. She was cheated in a marriage scam until she was bankrupted and was saved by Jiruba, the first generation proprietress of Old Jack & Rose, while she was wandering around the streets.

Shinagawa Toru as Janome Kokichi
The bartender at Old Jack & Rose. He has supported the bar for a long time, together with Jiruba. He is secretive about his romance with Jiruba but … …

Kusabue Mitsuko as Kuji Kirako (Kujira-mama)
The second generation proprietress of Old Jack & Rose. She is an elegant woman with a sharp tongue. She has the air of dignity of someone who has overcome numerous difficulties. She advises Janome Kokichi to hire Usui Arata when Arata walks into the bar.

This blog contains information and musings on current and upcoming Japanese dramas but is not intended to be comprehensive.
View all posts by jadefrost →
This entry was posted in Fuji TV, Winter 2021 Dramas and tagged Ikewaki Chizuru, Kusabue Mitsuko, Sono Onna Jiruba. Bookmark the permalink.