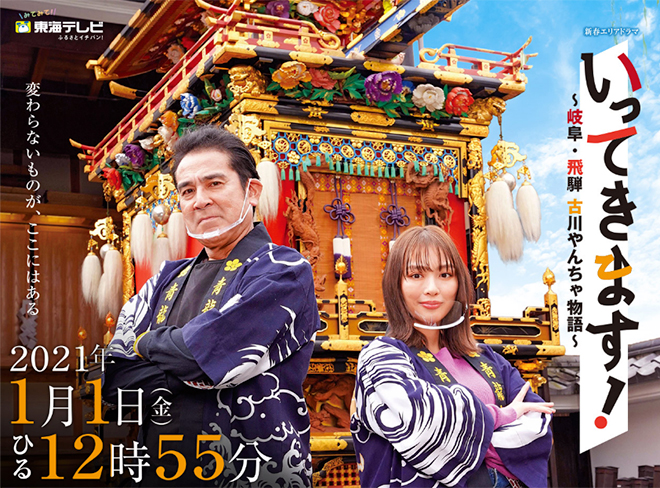 Date: From 12.55 p.m., 1 January 2021
Scriptwriter: Ito Nanoha
Director: Kanazawa Tomoya
Cast: Uchida Rio, Tetsu, Tomo, Yuji, Tomita Keisuke, Okada Masaru, Ukaji Takashi
Synopsis: In the autumn of 2020, Ikezawa Mari (Uchida Rio) returns as a reporter of a television programme to the town of Hida Furukawa in Gifu Prefecture for the first time in almost 10 years. Her father Seiji (Ukaji Takashi) is the chief brewer at a local sake brewery. Although she asked him for permission go to Tokyo so that she could succeed as an actress in the metropolis, the only role she actually played was a dead body with no lines. Mari has been selected as a reporter for the programme because of a mission. That is to shoot a video of the festival floats used during the Furukawa Festival which has been cancelled this year due to the pandemic. If she can persuade her father who is also the chairman of the committee for the preservation of festival floats, her secret pact with the programme’s producer to act in a drama will come true. It is a critical moment for Mari who is 29 years old. The townspeople feel an unspeakable sense of loss without the festival this year and some really just want the festival floats pulled around. Mari discusses this with her father in a bid to accomplish her mission, but his reply is no. He says that the festival floats are the pride of town and he cannot grant her request. Even though Mari pleads with him that this is her last chance, he continues to stubbornly refuse. He wants to convey to her that the Furukawa Festival consists of the motion of the drums and the calm of the parade of festival floats. The Furukawa Yancha spirit does not point only to rowdy people. It refers to the indomitable spirit connecting across generations that is the pride of the town and also the way of life for both men and women. There are more important things in the world than success.
Website: www.tokai-tv.com/ittekimasu

This blog contains information and musings on current and upcoming Japanese dramas but is not intended to be comprehensive.
View all posts by jadefrost →
This entry was posted in Tokai TV, Winter 2021 Drama Specials and tagged Ittekimasu!, Uchida Rio. Bookmark the permalink.