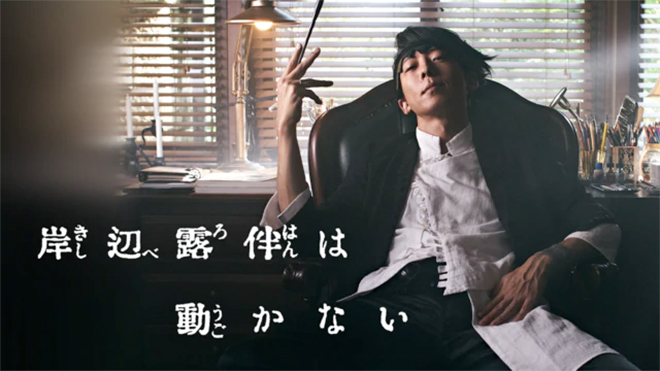 Episode 1: Fugo-mura
Synopsis: The Millionaire Village located deep in the mountains has 11 mansions and is isolated from the surrounding area. The owners are all multimillionaires who have achieved success in their respective fields. They are said to have succeeded because they bought land in this village in their twenties. However, it seems that no one is allowed to buy land unless they fulfil certain conditions. Kishibe Rohan (Takahashi Issei) and his new editor Izumi Kyoka (Iitoyo Marie) go to the village to confirm the truth of the matter. They are put through a bizarre test by a guide called Ikkyu (Shibazaki Fuga) to assess their manners. If they observe etiquette, victory will be close at hand. But if they flout it, they will lose something precious to them … …
Cast: Takahashi Issei, Iitoyo Marie, Shibazaki Fuga

Episode 2: Kushagara
Synopsis: Rohan (Takahashi Issei) is consulted about something strange by Shishi Jugo (Moriyama Mirai), a fellow manga artist with the same publishing company. Jugo has been told by his editor that the use of word “kushagara” is banned. However, the meaning of the word is even not listed in online or in any dictionary. He wants to use it precisely because he has been told that it is prohibited. But he cannot do so if he does not know what “kushagara” means. Jugo’s curiosity gets the better of him and his obsession with the word eventually takes a toll on his mind and body. Rohan turns him into a book but the pages are sealed on all sides and there is something wriggling inside … …
Cast: Takahashi Issei, Iitoyo Marie, Moriyama Mirai

Episode 3: DNA
Synopsis: The photographer Hirai Taro (Nakamura Tomoya) has lost his memories. Rohan (Takahashi Issei) is asked by Kyoka (Iitoyo Marie), who is dating Taro, to search for them through hypnosis. Taro was a well-known photographer but he had a traffic accident six years ago. Although he escaped death, he has not been completely rehabilitated. Kyoka introduces Rohan to Taro. While they are talking, a buggy carrying a woman Katahira Mai (Takiuchi Kumi) passes by. Her daughter Mao’s hand reaches out from the back of the buggy and grasps Taro’s shirttail and causes him to fall. In that instant, Rohan detects something unusual in Mao’s gaze as she watches.
Cast: Takahashi Issei, Iitoyo Marie, Takiuchi Kumi, Nakamura Tomoya

This blog contains information and musings on current and upcoming Japanese dramas but is not intended to be comprehensive.
View all posts by jadefrost →
This entry was posted in NHK, Winter 2021 Drama Specials and tagged Kishibe Rohan wa Ugokanai, Moriyama Mirai, Takahashi Issei. Bookmark the permalink.