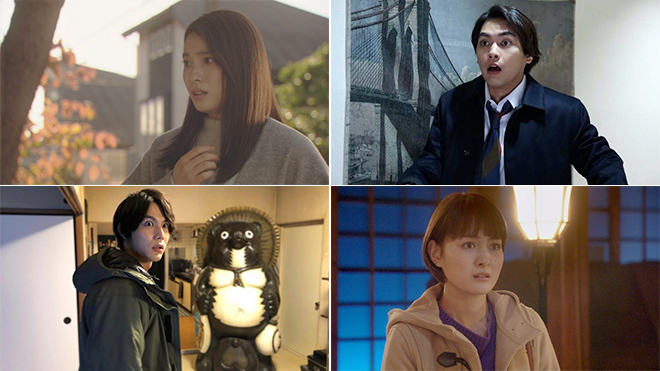 Fuyu no Kiseki
Story: Mochizuki Kanako (Tsuchiya Tao) dreams of taking up cooking and works at Yoshimoto Tadafumi’s (Yashima Norito) shop selling take-away meals. She and her younger brother Tomooya (Matsuo Jun) were raised single-handedly by their mother Yukie (Ishino Mako) who passed away two years. Since then, Kanako has struggled to juggle family matters and work. One day, she hears a sound from the shelf where a photograph of her late mother has been placed. That is the start of a series of strange happenings. She wonders whether these incidents are a message from her mother who died with ill feelings but … …
Scriptwriter: Sakamaki Hiroshi
Cast: Tsuchiya Tao, Yashima Norito, Matsuo Jun, Ishino Mako

Yugure no Maigo
Story: One day, Moriyama Riko (Aoi Wakana) finds a crying girl (Kaneko Risa) seated on a swing in a park. The girl seems to have been separated from her mother but she keeps crying for her mum no matter what Riko asks her. Riko takes her hand and starts walking to a police box to drop her off. However along the way, the girl suddenly stops in her tracks in front of a temple and starts sobbing softly. Riko at a loss about what to do but is called over by the chief priest (Sasano Takashi) from the temple. She explains the situation to him and the two of them are guided into the main temple building. Then the chief priest tells her some shocking information.
Scriptwriter: Hoshina Emi
Cast: Aoi Wakana, Kaneko Risa, Sasano Takashi

Fushigina Omamori
Story: Things have not been going well for Tajima Ryosuke (Yagira Yuya) in both work and romance. One night, Ryosuke is greeted by a female stranger (Sato Megumi) by a female stranger and handed an old charm. Although this seems odd to him, he leaves for work the next morning and starts to enjoy a bit of good luck from that day on. However, the more good things happen to Ryosuke, the more unfortunate incidents befall his younger sister Ayano (Ishikawa Ren) as well as a junior at his company Aikawa Fumito (Miura Ryota). Thinking that it was caused by the charm, Ryosuke heads to the shrine to return it but he is subjected to a series of trials on his way there.
Scriptwriter: Hoshina Emi
Cast: Yagira Yuya, Ishikawa Ren, Miura Ryota, Takayanagi Manami, Sato Megumi

Saigo no Kaimono
Story: University student Muto Haruto (Nakagawa Taishi) is asked by his senior Murakami Takayuki (Yano Masato) to help out at a flea market one day. On the day itself, an elderly gentleman (Ono Takehiko) gazes at the big raccoon dog figurine that Haruto had arranged at the front of the stall. On the last day, the elderly gentleman who purchased the figurine, says that he wants it delivered to his home and hands Haruto a hand-drawn map. Haruto ends up keeping it at his place until the delivery is done. Strange things start to happen personally to him and between him and his crush Takagi Kasumi (Shimazaki Haruka). On the day of the delivery, Haruto relies on the map to make his way over but … …
Scriptwriter: Sakamaki Hiroshi
Cast: Nakagawa Taishi, Shimazaki Haruka, Yano Masato, Ono Takehiko

This blog contains information and musings on current and upcoming Japanese dramas but is not intended to be comprehensive.
View all posts by jadefrost →
This entry was posted in Fuji TV, Winter 2021 Drama Specials and tagged Nakagawa Taishi, Takahata Mitsuki, Tsuchiya Tao, Yagira Yuya, Yottsu no Fushigina Story. Bookmark the permalink.