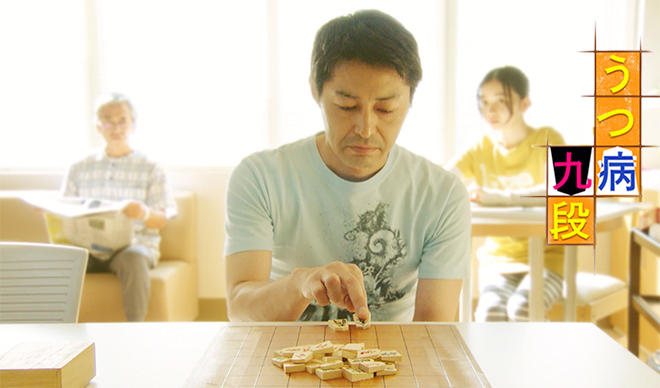 Date: From 9.00 p.m., 20 December 2020
Original Work: Utsubyou Kudan by Senzaki Manabu
Scriptwriter: Komatsu Yoshiko (Soroban Samurai Kaze no Ichibei, Zenryoku Rikon Soudan)
Director: Yoshida Hiroki
Cast: Yasuda Ken, Uchida Yuki, Minami Sara, Fukuchi Momoko, Watabe Gota, Takahashi Katsumi, Maekawa Yasuyuki, Terajima Susumu, Takahata Atsuko, Tsuchiya Nobuyuki, Suzuki Fuku
Synopsis: Sengaki Manabu (Yasuda Ken) is a popular professional shogi player who holds the highest rank of 9-dan. In July 2017, he was in the middle of a game that would determine his rank when his brain suddenly froze. He could not focus on the shogi board and images of death swirled in his mind. As the person in charge of the shogi association’s public relations, he was busy responding to scandals that had shaken up the shogi world. At the same time, he was also a supervising director for a movie on shogi. He had no rest as he would play shogi in the intervals between. His older brother Akira (Takahashi Katsumi) who is a psychiatrist, diagnoses his condition as depression and recommends immediate hospitalisation. The doctor in charge orders Sengaki to take a long rest and stop playing shogi in the meantime. Shogi would only hamper his medical treatment as it entails extreme concentration. Sengaki’s wife Mayu (Uchida Yuki), who is a professional go player, believes that he will make a comeback. Together with their daughter Haruka (Minami Sara), she fervently supports him. Sengaki eventually regains his energy after a fierce fight with his illness and is discharged from hospital. Mayu has been proceeding with preparations for the establishment of a classroom for shogi and go, which will also be the place for Sengaki’s rehabilitation. On the day of the opening, Sengaki is invited to a ceremonial game by young shogi players. He is shocked by what he sees. It seems like a game from a different world and he is completely unable to understand the rules of shogi due to his depression.
Official Website: www.nhk.jp/p/utsubyou-kudan/ts/9Y5RJLZY84

This blog contains information and musings on current and upcoming Japanese dramas but is not intended to be comprehensive.
View all posts by jadefrost →
This entry was posted in NHK, Winter 2021 Drama Specials and tagged Uchida Yuki, Utsubyou Kudan, Yasuda Ken. Bookmark the permalink.