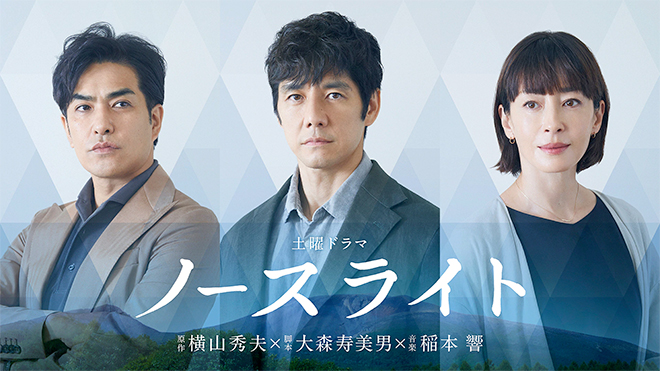 Date: From 9.00 p.m., 12 & 19 December 2020
Original Work: North Light by Yokoyama Hideo
Scriptwriter: Omori Sumio (Tenshi ni Request o, Natsuzora, Seirei no Moribito Series)
Director: Kasaura Tomochika
Cast: Nishijima Hidetoshi, Kitamura Kazuki, Tanaka Rena, Ito Atsushi, Hayashi Yasufumi, Emoto Tokio, Tanaka Minami, Aoki Munetaka, Terawaki Yasufumi, Miayazawa Rie
Synopsis: Ever since the bubble economy burst, Aose Minoru (Nishijima Hidetoshi), an architect with a first-class licence, has become resigned to work that seems like a production line system. He also broke up with his wife Yukari (Miayazawa Rie) who is an interior coordinator, and feels himself stagnating by the day. One day, Aose gets a surprising commission. His client is a man called Yoshino Tota (Ito Atsushi). Yoshino wants Aose to build a house that he himself would want to live in. This is a welcome development for Aose to exercise his creativity. The planned construction site is in Shinano Oiwake, a beautiful resort area which is surrounded by nature in the town of Karuizawa in Nagano Prefecture. With the support of his old friend Okajima Akihiko (Kitamura Kazuki), who heads an architectural firm, Aose builds a splendid home. Not only does Yoshino’s family seem pleased with the house, the house is even acclaimed by magazines. Aose becomes the talk of the industry once again. However, just a year after completion, it turns out that the house that Yoshino and the family were so impressed with, was never occupied. Aose and Okajima head to the house in a bid to probe the situation. There are marks indicating that the door was forced open and has not been locked. When they enter the house, there is only a worn out chair. According to Okajima, this chair is by the German modern architect Bruno Taut. What happened to the Yoshinos? What is Okajima hiding and how is Yukari involved in this matter?
Official Website: www.nhk.jp/p/ts/ZYRQ3YPR17

This blog contains information and musings on current and upcoming Japanese dramas but is not intended to be comprehensive.
View all posts by jadefrost →
This entry was posted in NHK, Winter 2021 Drama Specials and tagged Aoki Munetaka, Kitamura Kazuki, Miayazawa Rie, Nishijima Hidetoshi, North Light, Tanaka Rena, Yokoyama Hideo. Bookmark the permalink.