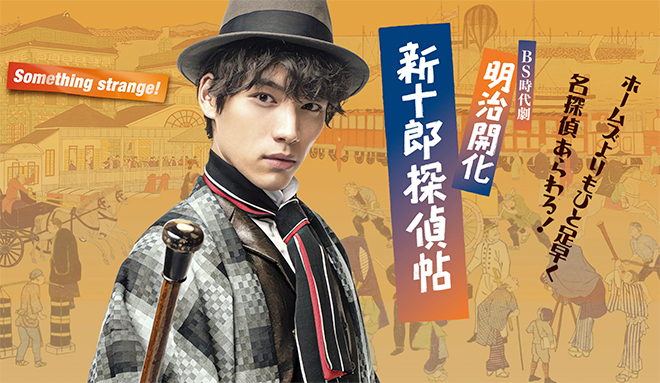 Story
The early days of the Meiji era was a period of massive change as the Westernisation movement livened up society. During that time, there were a high incidence of bizarre cases. The special investigator Yuki Shinjuro, who has a good standing with the Tokyo Metropolitan Police Department, returns to Japan after his travels abroad and is outspoken about the truth of these cases. Izumiyama Toranosuke, who learned swordsmanship from Katsu Kaishu, loves making deductions about difficult cases. He is always treated disparagingly and cries to have the brains and eyes of Kaishu whom he admires. One day, A masquerade ball bringing together important government officials is held at the residence of Kano Gohei, a wealthy merchant with political ties. However, Gohei and his wife Atsuko are murdered by someone right in front of everyone during the event. As the prime minister and ambassadors of foreign countries have been dragged into the incident, it could become an international issue with one wrong move. Shinjuro is thus singled out. He begins to investigate with his self-styled partner Toranosuke. Shinjuro, Toranosuke and Kaishu draw all sorts of people to them including Kaishu’s gutsy wife Tami who was formerly a geisha; Rie, Gohei’s daughter who is in love with Shinjuro; Hananoya Inga, a writer of fiction of a style combining a facetious tone with elaborate structure; and the great police superintendent Hayami Seigen who considers Shinjuro a nuisance. As their case-solving progresses, the anxiety as well as love and hate that people have towards the new Meiji era manifests itself. Shinjuro, Rie and Toranosuke tangle with many important people of the period such as Saigo Takamori and Okubo Toshimichi through these cases, and grow up.

Characters
Fukushi Sota as Yuki Shinjuro
A special investigator who has won the confidence of the Tokyo Metropolitan Police Department. He loathes restrictive work and is an intellectual who places importance on logic, facts and Western scientific knowledge. His father was a chief retainer in the shogunate but his parents and relatives were killed by the Satsuma and Choshu troops in the midst of the Meiji Revolution and he went to America for the sake of his own safety.

Uchida Rio as Kano Rie
The daughter of the wealthy merchant Kano Gohei. She comes to idolise Yuki Shinjuro after he finds out the truth of her parents’ murder. There are times when she uses her family’s tremendous financial clout to help Shinjuro. She is very proud because she was brought up like a princess and looks at social standing and wealth. However, her perspective gradually broadens as she gets influenced by Shinjuro and Izumiyama Toranosuke.

Yamoto Yuma as Izumiyama Toranosuke
A disciple of Katsu Kaishu, he is a swordsman who runs a training hall next to Katsu’s residence. Although he loves making deductions for challenging cases, they are always wrong. He calls himself Yuki Shinjuro’s partner and goes to crime scenes with him. He respects Katsu Kaishu, and lives with compassion, determination and chivalry. Despite his single-mindedness, he is scatter-brained and impossible to hate.

Tsurumi Shingo as Saigo Takamori
A hero of the Meiji Revolution who is now an army general. Although he achieved the bloodless surrender of Edo Castle with Katsu Kaishu, he is later prevailed upon to lead the Satsuma Rebellion, a revolt by samurai disgruntled with the Meiji government. He and Katsu Kaishu have deep faith in each other.

Inamori Izumi as Katsu Tami
Katsu Kaishu’s wife. She used to be a popular geisha from the Fukagawa district. While she is extremely overbearing and does not mince her words, she is very compassionate and will never forsake anyone. She watches over Yuki Shinjuro like a mother but she is slightly harsh with Izumiyama Toranosuke who has been frequenting the house for a long time as her husband’s disciple.

Takahashi Katsunori as Katsu Kaishu
A hero of the Meiji Revolution. He lets Yuki Shinjuro live at his house despite knowing Shinjuro’s circumstances. He negotiated the peaceful handover of Edo Castle during the Boshin War. As one of the parties who brought about the modernisation of Japan, he shared the same aspirations as Saigo Takamori, but he worried about the state of the new world by the new government. He listens to case outlines from Shinjuro and Toranosuke, and gives advice on their deductions.

This blog contains information and musings on current and upcoming Japanese dramas but is not intended to be comprehensive.
View all posts by jadefrost →
This entry was posted in NHK, Winter 2021 Dramas and tagged Inamori Izumi, Meiji Kaika, Takahashi Katsunori. Bookmark the permalink.