Imawa no Kuni no Alice Season 1 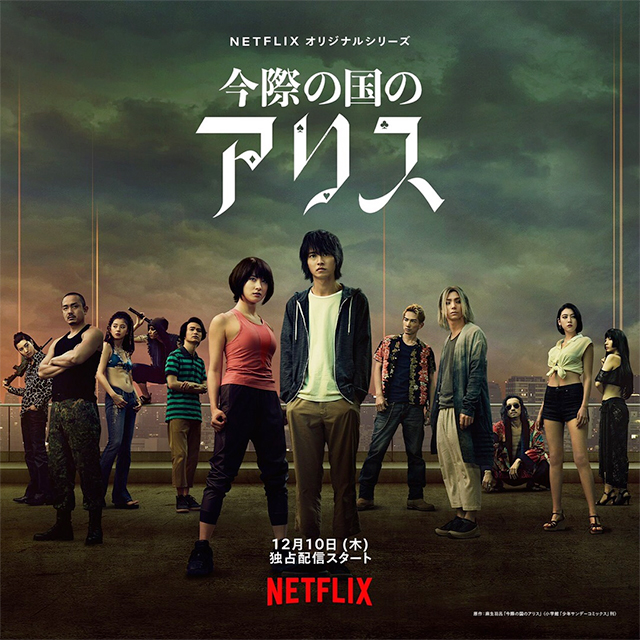 Story
Arisu Ryohei is unemployed and frustrated with daily life which he finds unbearable. Constantly compared with his brilliant younger brother by his father and treated as the loser in the family, the only people who give him strength are his two good friends Segawa Chota, who is a company employee, and Karube Daikichi, who is a bartender. One day, while Arisu is hanging around Shibuya with Chota and Karube, a mysterious light radiates. When they realise it, all signs of life around them have suddenly vanished. Despite feeling uneasy about the situation, the three of them exult in the sense of liberation with no one around. However, they have been tossed into a grim world known as the Borderland, where an extreme game of survival is being waged, without even knowing the reason. Arisu, Chota and Karube have to clear the game in order to survive in this world. The genres are determined by the four playing card symbols displayed on their smart phones. Clubs for teamwork, Diamonds for intellectual, Spades for physical, and Hearts for psychological. The rule of the game is that if they clear a genre and obtain a “visa”, their days of life is tied to the number on the playing card. A series of games begin one after another in an empty Tokyo where one wrong move will cause them their lives. Arisu and his friends have to fight tooth and nail in the face of challenges that defy logic. He encounters a mountaineer called Usagi Yuzuha in the game. She does not make friends and has continued to tackle this game alone. The two of them establish trust in this mysterious Borderland and decide to team up with others in a bid to survive … …

Original Work
Imawa no Kuni no Arisu by Aso Haro

This blog contains information and musings on current and upcoming Japanese dramas but is not intended to be comprehensive.
View all posts by jadefrost →
This entry was posted in Netflix, Winter 2021 Dramas and tagged Imawa no Kuni no Alice Series, Naka Riisa, Tsuchiya Tao. Bookmark the permalink.