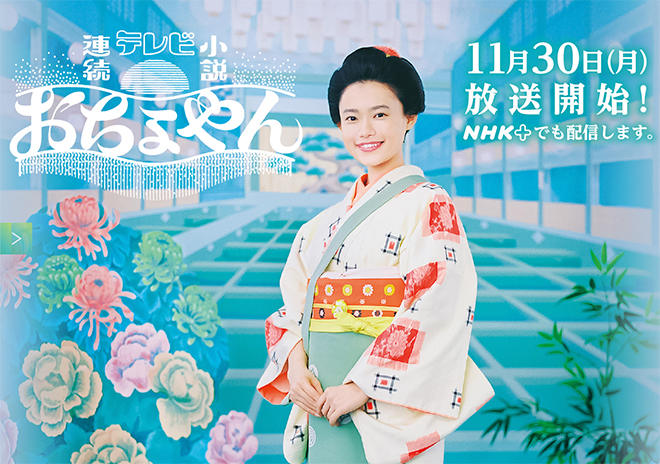 Story
Takei Chiyo was born to a poor family in Osaka Prefecture’s Minami Kawachi district after the end of the Meiji era. Her mother passed away when she was still a child, and she lives with her father Teruo who is a drunkard and younger brother Yoshio. Although Chiyo could not go to elementary school because she has been busy taking care of Yoshio and chickens, she is a lively girl with the gift of the gab and quick wit. One day, Teruo brings home a new mother for his children. Chiyo is delighted that she will be able to attend school. But Kuriko does not do any housework. At the age of 9, Chiyo is apprenticed to the theatre teahouse Okayasu in Dotombori where she sees the spectacular world of theatre which immediately captivates her. Aspiring to become an actress, she eventually runs away and heads to Kyoto where she throws herself into acting. After a stint at a film production studio in Kyoto, Chiyo joins the newly formed Tsurukame theatre company in Osaka. That is where she meets the prince of comedy, Amami Ippei, and they eventually get married. She grows as a comedy actress little by little. Together with Ippei, she strives for the ideal comedy but World War II begins and Dotombori is hit in an air raid. After the war, the Tsurukame theatre company makes a comeback. However, her marriage breaks down and she ends up leaving the world of acting. Chiyo later makes a return as an actress in a radio drama where she plays the role of a mother of 12 children. It gets a tremendous response and becomes a popular decade-long programme. She gains great popularity as “Osaka’s mother” and becomes an actress representative of the Kansai region.

Characters
Sugisaki Hana as Takei Chiyo
She was born to a poor family in Osaka Prefecture’s Minami Kawachi district. Her mother passed away when she was still a child and she lives with her father Teruo and younger brother Yoshio. She has the gift of the gab and quick wit. When she is 9 years old, she starts working at a teahouse that is part of a theatre at Dotombori and comes across the theatre world. She is instantly captivated and her desire to become an actress grows stronger by the day. She eventually runs away from the place of apprenticeship and heads to Kyoto where she leaps into the world of acting.

Narita Ryo as Amami Ippei
The son of the leader of the popular comedy troupe Amami Amami. He has been a reluctant child actor since he was young but soon realises his goal of creating new comedies. He joins Tsurukame theatre company with Takei Chiyo. The two of them eventually get married and work together.

Tortoise Matsumoto as Takei Teruo
Takei Chiyo’s father. He makes a living through chicken farming but he is a useless father who leaves everything from the care of the chickens to housework to his daughter. Although he is a show-off, he is coward and does not know how to get on in the world. However, he is popular with women because of his smooth talking. For Chiyo, he continues to be a troublemaker whom she cannot quite hate.

Shinohara Ryoko as Okada Shizu
The female proprietress who manages the theatre teahouse Okayasu where Takei Chiyo starts working at as a helper. Although work is difficult, she loves Dotombori, the theatre district, dearly. She is strict with Chiyo but watches over her and becomes another mother to Chiyo.

Nagura Jun as Okada Sosuke
The owner of the theatre teahouse Okayasu. He is no match for his wife Shizu because he married into her family after he fell in love with her at first sight. He is genial and kind, and gently supports Shizu and Chiyo.

Wakamura Mayumi as Yamamura Chidori
The leader of the Yamamura Chidori troupe at a small theatre teahouse in Kyoto. She becomes Takei Chiyo’s first teacher after Chiyo takes the plunge into the world of acting. She is wilful and has strong quirks but her intensity moulds the foundation for Chiyo’s acting.

Igawa Haruka as Takashiro Yuriko
A star actress whom Takei Chiyo has admired ever since she saw her at a theatre in Dotombori. Her beauty and passionate acting captivates the audience. She pursues a free life for the sake of arts and this greatly influences Chiyo.

Itao Itsuji as Suganoya Mantaro
The king of comedy who enjoys a remarkable audience turnout. He leads the Suganoya Mantaro troupe. He is exceptionally popular not only in Osaka but also Tokyo. Takei Chiyo and Amami Ippei strive to outclass him.

Wakaba Ryuya as Kogure Shinji
An assistant director at Tsurukame Film Studio who wishes to be a director someday. He helps the clueless Takei Chiyo even though she is a actress with bit parts at the film studio. He becomes her first love?!

This blog contains information and musings on current and upcoming Japanese dramas but is not intended to be comprehensive.
View all posts by jadefrost →
This entry was posted in NHK, Winter 2021 Dramas and tagged Igawa Haruka, Itao Itsuji, Ochoyan, Shinohara Ryoko, Sugisaki Hana, Wakamura Mayumi. Bookmark the permalink.