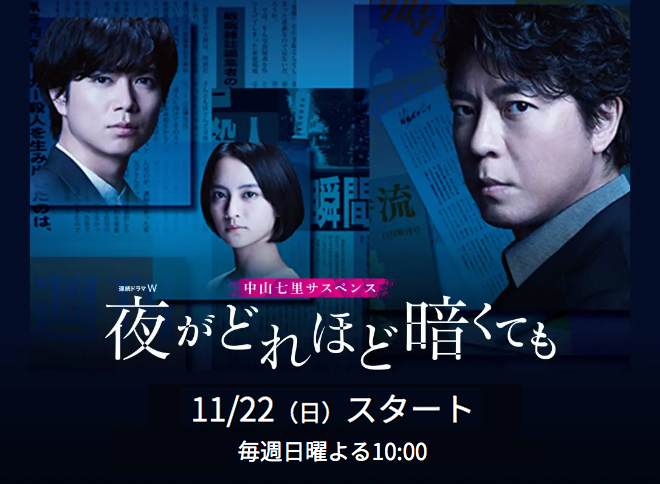 Story
Shukan Jiryu, a well-known magazine by a major publisher, has increased sales by going after scoops and exposing numerous scandals. Its deputy editor Shiga Michinari’s life has been going well and he is tough in guiding his subordinate Inami Wataru. But one day, when Shiga’s only son Kensuke, who is a university student, causes a stalking-related murder and ends his life at the scene, Shiga’s happy life crumbles. His position is reversed overnight from pursuing scandals, to being the one pursued as a family member of the suspect while the editor-in-chief Torikai Narihito decides not to do what is expected although Shiga’s son committed the crime and puts Inami in charge of covering the story. He is relegated to another magazine and absurd news reports and rumours swirling around online start to weigh on him. His relationship with his wife Mariko deteriorates. While he is stuck in this hopeless situation, an encounter with a young woman Hoshino Nanami spurs him into action again. New facts begin to emerge little by little and Shiga finds a ray of light in this deep darkness.

Characters
Kamikawa Takaya as Shiga Michinari
The deputy editor of Shukan Jiryu. His life has been going well. But when his son Kensuke, whom he is not close to, is suspected of murder, things dramatically change.

Kato Shigeaki as Inami Wataru
A young reporter with Shukan Jiryu’s editorial department. He is at odds with his boss Shiga Michinari regarding the style of reporting. He ends up interviewing Shiga after the case involving Shiga’s son happens.

Hayama Shono as Shiga Kensuke
Shiga Michinari’s only son. He is suspected of killing Hoshino Kikuko who is a lecturer at the university that he attends, and her husband.

Hada Michiko as Shiga Mariko
Shiga Michinari’s wife. She believes that their son Kensuke is innocent but she and her husband are fiercely criticised by the public.

Okada Yui as Hoshino Nanami
A high school student who is the daughter of the murdered couple. She hates Shiga Michinari, the father of the her parents’ suspected murderer, and reaches out to him.

Kirishima Reika as Hoshino Kikuko
Hoshino Nanami’s mother and the murder victim. She was a lecturer who taught youth psychology at a university and was well regarded by the students.

Takashima Masanobu as Kudo Kenji
An assistant inspector with the Tokyo Metropolitan Police Department’s First Investigation Division. Nagasawa Kazuki’s boss. He is excellent in perceiving things and coolly goes after the true criminal in the case.

Harada Taizo as Nagasawa Kazuki
An assistant inspector with the Tokyo Metropolitan Police Department’s First Investigation Division. He hates the weekly magazines. Despite the mixed feelings he has towards Shiga Michinari, he pursues the truth of the case.

Takahashi Katsumi as Torikai Narihito
The editor of Shukan Jiryu and the boss of Shiga Michinari and Inami Wataru. He does not give any consideration to the fact that Shiga’s son committed the crime and makes Inami cover the story.

This blog contains information and musings on current and upcoming Japanese dramas but is not intended to be comprehensive.
View all posts by jadefrost →
This entry was posted in Fall 2020 Dramas, WOWOW and tagged Harada Taizo, Kamikawa Takaya, Takashima Masanobu, Yoru ga Dorehodo Kurakutemo. Bookmark the permalink.