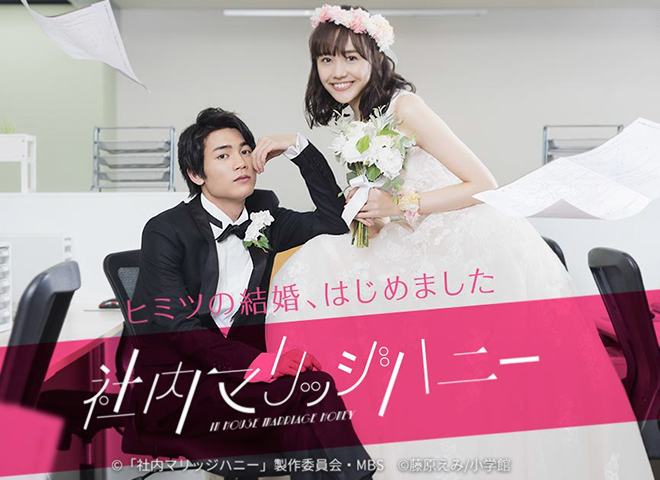 Story
After her boyfriend cheats on her, 23-year-old Haruta Ami breaks off their engagement and registers herself on a matchmaking app out of desperation. She finds Miura Manatsu’s post “Looking for a woman who will marry me on the same day” through the app and they get married immediately without knowing each other’s face, personality and background. Ami had been drawn to the words he posted and was desperate enough to choose marriage thinking that she does not need love as long as she can get married. The couple start to go through the motions of newly wed life but Ami finds herself gradually attracted to Manatsu’s kindness and manliness. They rapidly grow closer as they feel their way around. However, the two of them later find out that they work for the same company! As they are not able to disclose their sudden marriage to the people around them, it becomes a secret office romance. However, their colleagues and even Ami’s masseur begin to detect changes in the two of them. Furthermore, Manatsu has a secret for the same day marriage. The sham life of this newly married couple vacillates wildly but is tinged with sweetness.

Characters
Itagaki Mizuki as Miura Manatsu
A top salesman for Shogaku Corporation’s Sales Department. He gets married to Haruta Ami through a matching making app and begins married life without dating. Contrary to his good looks, he is quite the sadist. He is affectionate and increasingly assertive in his treatment of Ami who is only aggressive with him.

Matsui Airi as Haruta Ami
An employee who works for Shogaku Corporation’s Accounting Department. She cannot forgive her boyfriend for his infidelity and breaks off their engagement. She desperately uses a matching making app, sees Miura Manatsu’s invitation to marry on the same day and immediately registers their marriage. She believes that she does not need love in a marriage but when they begin life as as newly weds, she quickly develops romantic feelings for Manatsu.

Wada Hayate as Matsushita Kazuya
Miura Manatsu’s senior during high school days. He works for Shogaku Corporation’s General Affairs Department, and knows about Manatsu’s past and secret. He senses the romance between Manatsu and Haruta Ami, and starts to find her interesting.

Oshida Gaku as Yamagata Yuki
Haruta Ami’s junior in Shogaku Corporation’s Accounting Department. He admires Ami who is passionate about work and respects her as a senior. He also has feelings for her.

Miyata Tappei as Hori Ryuhei
Haruta Ami’s colleague. He graduated from the same university as she did. When he learns that she broke off her engagement and is single once again, he seizes the opportunity.

Nakamura Riho as Sakaguchi Sumika
Haruta Ami’s colleague in Shogaku Corporation’s Accounting Department. She gives Ami advice on romance but begins to pick up on her delicate relationship with Miura Manatsu.

This blog contains information and musings on current and upcoming Japanese dramas but is not intended to be comprehensive.
View all posts by jadefrost →
This entry was posted in Fall 2020 Dramas, TBS/MBS and tagged Shanai Marriage Honey. Bookmark the permalink.