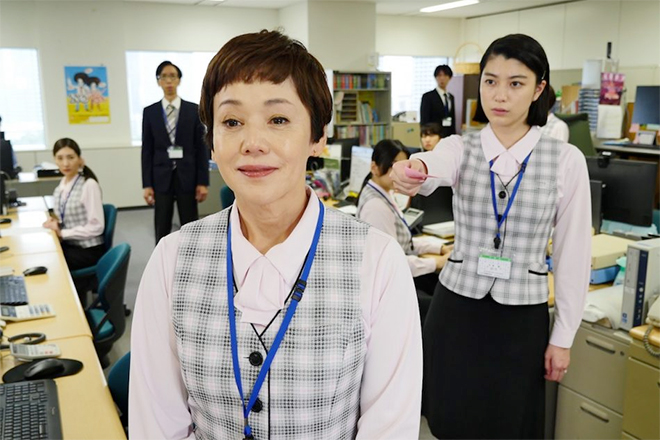 Coin Laundry
Story: Hashimoto Manabu (Hamada Gaku) is a temporary worker who has been laid off and has no choice but to live on part-time work. One day, he finishes washing his work clothes at a coin laundry and is about to put it into a dryer but the dryer just will not start. While he is waiting to use the next available dryer, he casually mutters that he wants a beer. To his surprise, there is beer inside the dryer that he thought had broken down. A shady-looking cleaner (Croket) comes over and tells him that he can get anything he wants when he makes a request. Hashimoto realises that he can obtain whatever he desires, but what is the fate that awaits him?
Cast: Hamada Gaku, Okazaki Sae, Croket

Tatemoto Masako
Story: Tatemoto Masako (Otake Shinobu) works for Shinwa Stationery’s General Affairs Department. She seems to be a typical office staff but she possesses a strange ability to manipulate people using the power of words. However, she is just like a modern version of a witch and uses this ability only for her own self-interest. One day, Shikura Kaede (Narumi Riko) gets a proposal from a colleague Kondo Masaya (Saeki Daichi) but the next day, he jumps off a building. It is rumoured that he committed suicide but Kaede cannot believe this when she knows what he was like the day before. On the evening of the day that Kondo jumped off the building, he was seen arguing with Masako but … …
Cast: Otake Shinobu, Narumi Riko, Moritaka Ai, Komatsu Kazushige, Saeki Daichi, Ura Mayu

Imaginary Friend
Story: Harada Saki (Hirose Suzu) is a university student majoring in clinical psychology. At a lecture, she learns about imaginary friends created by a figment of imagination. It is said to be most common for those who are an only child or the eldest son or daughter. In fact, Saki recalls that as a child, she had a friend in the form of a rabbit soft toy called Yuki-chan that only she could see. After she gets home, Yuki-chan suddenly appears again in her room. But this is merely the start of a certain incident.
Cast: Hirose Suzu, Horiuchi Keiko, Kizu Takumi, Yokota Mayu, Natsuko

Update Kazoku
Story: Three generations of the Kurosaki family live together under one roof. But they have not been a happy for a long time and the scene when they eat breakfast as a family has changed into a savage one. The father is Kurosaki Mutsuo (Takahashi Katsumi), a hopeless salaryman. He is treated like a doormat by his wife Yoko because he did not get a salary raise and even snubbed by their daughter Natsumi (Yoshikawa Ai). Just as Mutsuo is considering that the situation cannot go on like this, he sees an advertising insert. It is an advertisement for a new product called Update Kazoku. That night, when Natsumi returns home, she finds something amiss. Then her father appears and says that he decided to improve efficiency by updating the family but … …
Cast: Takahashi Katsumi, Yoshikawa Ai

This blog contains information and musings on current and upcoming Japanese dramas but is not intended to be comprehensive.
View all posts by jadefrost →
This entry was posted in Fall 2020 Drama Specials, Fuji TV and tagged Hamada Gaku, Hirose Suzu, Narumi Riko, Otake Shinobu, Yo ni mo Kimyouna Monogatari Series. Bookmark the permalink.