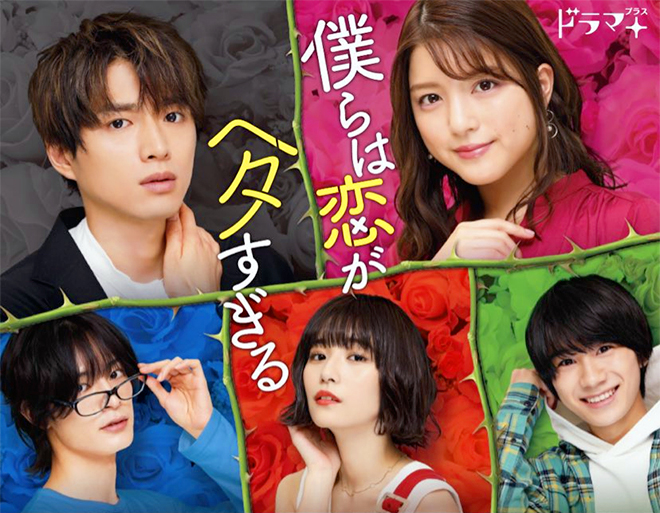 Story
Fujiwara Hana and Katayama Mizuki have been best friends since elementary school. When Hana gets dumped by her boyfriend who was cheating on her, Hana and Mizuki take a trip together to relieve her heartbreak. They meet two guys – Narita Yosuke and Ichinose Ayumu – at a hot spring inn at their destination. Although they have only just become acquainted, Yosuke suddenly starts to lecture Hana when he notices that she does not say what she wants. Hana uncharacteristically explodes after he points out her flaw and walks off. Several days later, Mizuki calls Hana, asking to meet Yosuke again. Hana has just started on a new project in her role in product development. Although she is tired from working all through the night, she is unable to turn Mizuki down when she shows up outside her office and drags her to meet Yosuke and Ayumu … … Hana starts to realise that her inability to speak out because she is too mindful of others is a shortcoming and tries to change. On the other hand, Mizuki, who has never dated seriously before, wants to be loved. Yosuke is despised for saying things that he thinks are for the other person’s sake while Ayumu is a mixture of kindness and frivolousness. Then there is Ayumu’s “younger brother” Kanata. Friendship, jealousy, betrayal and quarrels swirl in each of them. They start to come to terms with themselves through love.

Characters
Kawashima Umika as Fujiwara Hana
She belongs to a convenience store chain’s product development team and is in charge of creating sweets. She is too mindful of people and kind, and this is at the expense of herself. She has been protected by her good friend Katayama Mizuki all this while but … …

Shirasu Jin as Narita Yosuke
A management consultant. The handsome but foulmouth guy that Fujiwara Hana met on her trip. He has an overbearing and straightforward personality. Although he thinks that what he says is for the other person’s sake, he turns a lot of people around him off because of that.

Asakawa Nana as Katayama Mizuki
Fujiwara Hana’s good friend since she was an elementary school student. She has never seriously dated a guy before and has always been treated as a friend with benefits. She yearns to be loved.

Shiono Akihisa as Ichinose Ayumu
Narita Yosuke’s friend. There is a “shadow” in his heart that he has not told anyone about. He acts cheerful and frivolous but it is a wall that prevents people from getting closer … …

Shimasaki Toa as Ichinose Kanata
Ichinose Ayumu’s younger stepbrother. He aspires to be a singer and goes out into the city with a guitar in his hand. He meets Fujiwara Hana one night while busking on the street.

Theme Song
Be My Love by Abe Mao

This blog contains information and musings on current and upcoming Japanese dramas but is not intended to be comprehensive.
View all posts by jadefrost →
This entry was posted in Fall 2020 Dramas and tagged Bokura wa Koi ga Heta Sugiru. Bookmark the permalink.