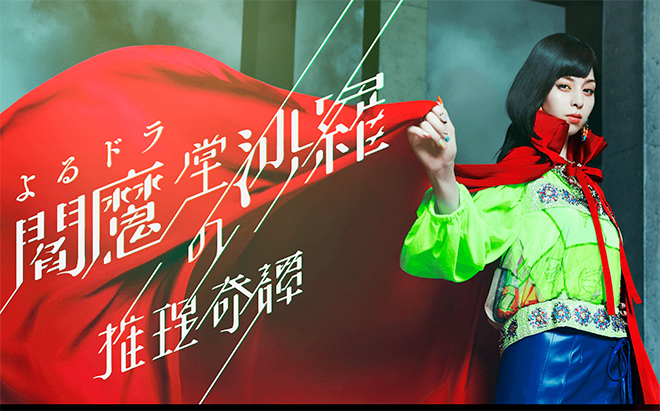 Story
Enmado Sara, the daughter of the king of the underworld, is a judge who decides whether to send the departed to heaven or to hell. Those who come to her are murder victims with feelings for the world they left behind. They plead to be resurrected and Sara has this to say to them, “Get to the bottom of your death.” The dead people frantically make deductions in their bid to be brought back to life. However, not only do they learn the truth, they also find out that they did not live life to the fullest while they were alive. This makes them prepared to live and change their lives. One day, a young man called Hamamoto Shota arrives. He is an employee of a food company and was hit on the head after items fell off a shelf while he was working in a freezer room. No one found him and he froze to death. However, Sara blurts that Hamamoto’s death was not an accident but murder. After Hamamoto hears this, he refuses to go to heaven and begs to be resurrected. Sara proposes that they play a game. Her condition is that he has to guess the identity of his murderer.

Characters
Nakajo Ayami as Enmado Sara
She stands in for her father who is the king of the underworld and judges the departed who arrive at the temple hall dedicated to him. She proposes a game of deducing and solving riddles to those who wish to be brought back to life.

Koseki Yuta as Hamamoto Shota
A 27-year-old salesman of a specialist distributor of chicken. He froze to death. Although he is a good guy, he is tactless and keeps making mistakes in his work. His successful colleague Chihara who joined the company at the same time as well as junior Iwata always have to cover for him. Although he is secretly in love with the prettiest woman in the company, he has no courage to confess his feelings to her. Enmado Sara says he is a loser.

Kaki Haruka as
A 17-year-old second-year high school student who was beaten to death. She lives with her father who calls himself an artist but has never sold any paintings or held a steady job. She has to work part-time to pay the household expenses. As a result, she has not had fun with her friends, owns a smart phone or even drunk bubble tea. Enmado Sara says she is a poor person.

Kuroshima Yuina as
A 22-year-old former top international badminton player who died because of a traffic accident. She is gifted and got to where she is due to her talent rather than hard work. However, she hurt her knee one and a half years ago and had to retire. She is temporarily coaching elementary school students at present. Enmado Sara says she is a coward.

R-Shitei as
A 30-year-old blackmailer who illegally extorts money by capitalising on people’s secrets and weaknesses. He died of unknown causes. He and his accomplice Agari have tread on dangerous ground as they amassed a tidy sum of money. However, he is reluctant to divide this money and Agari becomes an obstacle. Enmado Sara says he is money crazy.

Murakami Jun as
A 43-year-old detective from the Osaka Prefectural Police. He was stabbed to death. Although he is competent, he is the type who will do whatever it takes to solve a case and never lets go of suspects. He is in charge of training a newbie Morino but he thinks that Morino is not cut out to be a detective. Enmado Sara says he is a dog.

This blog contains information and musings on current and upcoming Japanese dramas but is not intended to be comprehensive.
View all posts by jadefrost →
This entry was posted in Fall 2020 Dramas, NHK and tagged Enmado Sara no Suiri Kitan. Bookmark the permalink.