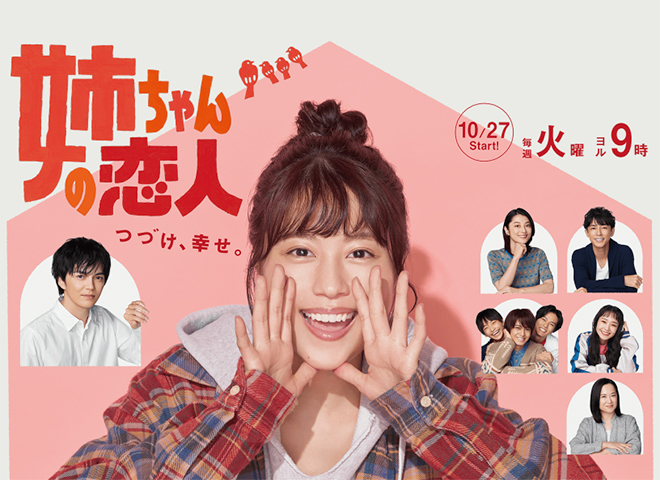 Story
27-year-old Adachi Momoko’s parents died in an accident when she was in the third year of high school and she gave up the idea of going to university. A cheerful, positive and slightly rough person, she is an employee of T’s Craft & Home, a home centre where she has worked for nine years in order to provide for her three younger brothers. As the breadwinner of the family, Momoko has done her best to overcome the painful past and daily hardships. Nothing matters more to her than the happiness of 20-year-old Kazuki, 17-year-old Yuki and 14-year-old Tomoki. Momoko has been living a relatively happy life despite being affected by the dramatic changes. However, as people’s interests begin to shift from Halloween to Christmas, Momoko has a chance encounter with Yoshioka Manato at the workplace. She falls in love him and her daily life changes significantly. She is gradually drawn to this fine guy who is slightly older than her and always has a smile. However, he has some emotional scars and a secret … … Momoko is like the sun while Manato feels vaguely dark. Their supportive families, workplace colleagues and friends get entangled in this romance between the couple who are somewhat innocent and awkward despite their age. What kind of ending will Momoko have when Christmas arrives?

Characters
Arimura Kasumi as Adachi Momoko
Her parents died in a traffic accident when she was in the third year of high school and she gave up going to university. She got a job at T’s Craft & Home that her relative introduced her to in order to provide for her three younger brothers. In the nine years that went by, she raised them on her own as the family’s breadwinner and also assumed the role of parent. She lets her delight, anger, sorrow and pleasure show in their cheerful, harmonious household and her brothers can tell her mood by the tune she unconsciously hums to herself.

Hayashi Kento as Yoshioka Manato
He works at T’s Craft & Home’s Delivery Department. He is good with the forklift and is serious about his work even when he is on the night shift. He usually has no contact with Momoko who works for the home fashion section, but they are nominated by their respective departments to be members of a Christmas project. He actually was emotionally hurt by some incident in the past.

Nao as Hamano Miyuki
Adachi Momoko’s childhood friend. She works at a travel agency. She and Momoko would occasionally meet in front of a nearby convenience store after work and talk about their jobs, families and romance. She is an important person whom Momoko can pour out the troubles that she is unable to tell her family or her workplace colleagues. She watches over the growth of Momoko’s three younger brothers like a parent.

Takahashi Kaito as Adachi Kazuki
Adachi Momoko’s brother. The eldest of three boys in the Adachi family. He is a third-year university student at the faculty of agriculture. He is truly grateful to his sister for working for the sake of the family and putting him through university. He vows to repay her someday. As he has seen Momoko get hurt after her romances failed to work out in the past, he worries endlessly about her after sensing that she is in love.

Wakui Emi as Yoshioka Takako
Yoshioka Manato’s mother. After her husband passed away, she works part-time while living with Manato. She has a ditzy and cute side but she also wishes for her son’s happiness more than anyone else. She is happy to see apparent changes in him through his involvement in the Christmas project and his meeting with Adachi Momoko, and supports them.

Koike Eiko as Ichihara Hinako
Adachi Momoko’s boss. As the head of T’s Craft & Home’s home fashion section, she leads her subordinates with the disposition of a big sister. She is beautiful and dependable. However, her romances have been a string of disappointments. She is still single at the age of 40 and it is not that she did not desire marriage or that she lives for work. She understands Momoko’s circumstances and daily efforts very well, and nominates her to be in charge of the store’s Christmas project.

Fujiki Naohito as Takada Satoshi
He works in T’s Craft & Home’s Delivery Department and is partnered with Yoshioka Manato who is his junior. Although he has a tendency to neglect work, he is a handsome guy who is impossible to loathe because of his friendly personality and charming smile. As he gets carried away easily, the usually quiet Manato involuntarily takes the part of the “straight guy”. He understands Manato’s emotional pain and is the only one in the workplace that Manato can trust.

This blog contains information and musings on current and upcoming Japanese dramas but is not intended to be comprehensive.
View all posts by jadefrost →
This entry was posted in Fall 2020 Dramas, Fuji TV and tagged Ane-chan no Koibito, Arimura Kasumi, Fujiki Naohito, Hayashi Kento, Koike Eiko, Konno Mahiru, Mitsuishi Ken, Wakui Emi. Bookmark the permalink.