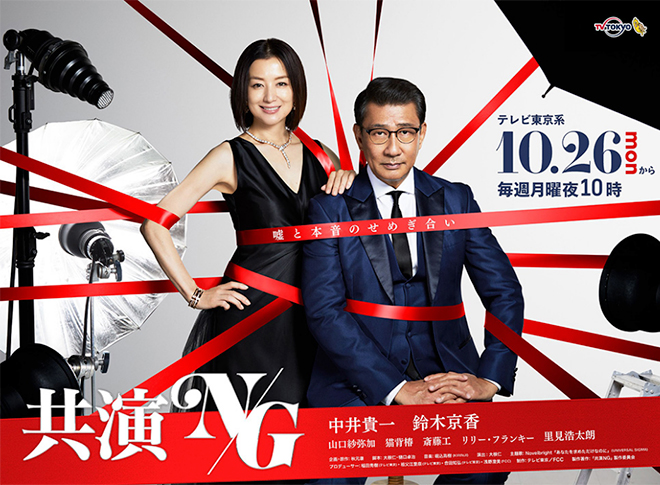 Story
Two heavyweight and popular actors Toyama Eiji, who once dominated the rankings for three consecutive years as the man that women want to marry, and Ozono Hitomi, who tops the rankings as the actress that people want as their boss, are set to be the leads for a major drama series titled Love You to Death by TV Toyo, a small television station. However, it has been an open secret that the two of them will not act together ever since they broke up 25 years ago because Eiji two-timed Hitomi. There is great public interest in their rare joint appearance and it is a remarkable coup for TV Toyo. However, on the day of the press conference for the drama, the hotel venue is packed with many members of the media who are waiting impatiently for their arrival. On the way to the hotel, Eiji starts to express reservations about acting together with Hitomi. Mark Nemoto, who is the CEO of the agency that Eiji belongs to, hurriedly soothes him. Meanwhile, Hitomi begins to complain that Eiji’s name appears before hers in the credits. Furukawa Shori, who is the CEO of the agency that Hitomi belongs to, tries to calm her down but she will not stop disparaging him. In the end, both of them say that they do not want to enter the venue before the other party. The head of TV Toyo’s Drama Department Tozawa Kanji, producer Koreeda Ikuo and assistant producer Kusunoki Miwa are waiting for the two leads. However, neither Eiji nor Hitomi show up at the appointed time and they start to get anxious. The Eiji and Hitomi they hold against each other is deep-seated and their battle has already begun before they meet again. What kind of reunion will they have? Furthermore, Ichihara Ryu, the drama’s showrunner and scriptwriter who made this dangerous pairing come true, has a scheme … …

Characters
Nakai Kiichi as Toyama Eiji
He rose to stardom in his mid-20s and gained popularity. The hit drama “Deeper Than Love” where he played the lead character, firmly established his position. After that, his passionate romance with his co-star Ozono Hitomi, who played the heroine, became a hot topic. However, he was soon discovered to be two-timing her and they split up. He was deprived of acting roles by the industry for the next three years because Hitomi held a press conference about the end of their relationship.

Suzuki Kyoka as Ozono Hitomi
She set up an agency called Office Friends together with the current CEO Furukawa Shiori, who used to be a student in the same theatrical company and was charmed by her talent. She received the newcomer award for movies at a young age. She steadily made progress with her image as a naive but strong woman, and she solidified her popularity with the big hit drama Deeper Than Love. She met Toyama Eiji through the drama, and they were madly in love but later broke up. She continues to top the rankings as the female actress that people want as their boss.

Yamaguchi Sayaka as Toyama Yukina
Toyama Eiji’s wife. A former idol. She met him through a drama that that they co-starred in 25 years ago. She initially considered him a good senior whom she could ask for all sorts of advice, but their relationship deepened as a result of some incident … …

Nekoze Tsubaki as Furukawa Shiori
The CEO of Office Friends, the agency that Ozono Hitomi belongs to. She used to be part of a small theatrical company and was active as an actress together with Ozono Hitomi. However, she fell in love with Hitomi’s talent and the two of them set up an entertainment agency. She is a partner in Hitomi’s personal and professional life.

Saito Takumi as Ichihara Ryu
The scriptwriter of Love You to Death who pays attention to the planning, casting and even the publicity. He shot to popularity after his drama on a streaming service became a big hit and is now a darling of the industry for being a hit maker with a variety of projects.

Lily Franky as Mark Nemoto
The CEO of Mark Planning, the agency that Toyama Eiji belongs to. He used to be a musician, but never gained much popularity. He set up an entertainment agency and switched to become a businessman. His encounter with Eiji changed his life. Since then, they have shared the same purpose.

Satomi Kotaro as Dejima Tetsutaro
A star of period dramas, he has been active from the Showa to Heisei period and is an undisputed great actor. In Love You to Death, he plays the role of Tanaka Shusaku, the father-in-law to Ozono Hitomi’s character Tanaka Hiroko. Even a veteran like him has a nemesis – Komatsu Shingo, an actor that he will not act with …

Horibe Keisuke as Komatsu Shingo
A unique actor who has returned from New York. He used to be Dejima Tetsutaro’s assistant but he left Dejima to go to the US after he could no longer tolerate his opinions on performers and his acting technique. He came back to Japan several years ago and has distinguished himself as a supporting actor.

This blog contains information and musings on current and upcoming Japanese dramas but is not intended to be comprehensive.
View all posts by jadefrost →
This entry was posted in Fall 2020 Dramas, TV Tokyo and tagged Kyouen NG, Nakai Kiichi, Suzuki Kyoka, Yamaguchi Sayaka. Bookmark the permalink.