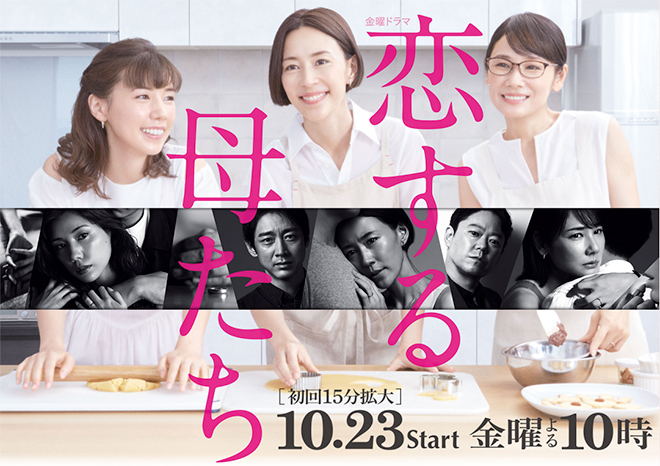 Story
Ishiwatari An has lived in comfort with her husband Shingo who works for a travel agency and their son Ken. But her life drastically changed one day when Shingo disappeared all of a sudden. She raises Ken as a single mother. He qualifies for the well-known Asakura Gakuen, a combined junior high and high school, and she attends a parent orientation session. Hayashi Yuko and Kanbara Mari who have sent their sons to Asakura Gakuen are also in the same classroom as An. “Surprisingly, the mothers are all having affairs,” An is shocked when she hears this from Mari whom she is friends with. These three beautiful mothers with different family situations seem to lead happy lives. But they have troubles and emotional scars that they cannot tell anyone. An’s husband disappeared with someone’s wife 11 years ago. She was told about this by the woman’s husband, Saiki Takumi. Yuko is a career woman. She has been supporting her husband Shigeo who is a struggling writer and their son Daisuke who has been a social recluse, and feels more comfortable when she is at work than with her family. Mari’s husband Shigeki heads a law firm and she leads a glamorous life. Although she realises that he has been cheating on her, she is not able to confront him. One day, she meets Konjakutei Marutaro at a charity event. As they struggle along and fight through the pain, will these men be able to enter the voids in their hearts?

Characters
Kimura Yoshino as Ishiwatari An
She lived comfortably with her husband Shingo and their only son Ken. But one day, Shingo disappeared all of a sudden and her life drastically changed. After that, she raises Ken as a single mother and enrolls him at the well-known Asakura Gakuen.

Yoshida Yo as Hayashi Yuko
The division manager of the PR department at Kojika Foods, a major food manufacturer. She feels ashamed at home because she has always prioritised her work. Although he family life seems to be going well, she is actually troubled that her son Daisuke has been a social recluse for a long time.

Naka Riisa as Kanbara Mari
She leads a glamorous life and lives in an upscale high-rise apartment. Even though she realises that her husband Shigeki has been cheating on her, she is not able to confront him about it. She meets Konjakutei Marutaro at a charity event and they are gradually drawn to each other.

Shibukawa Kiyohiko as Ishiwatari Shingo
Ishiwatari An’s husband. He worked for a travel agency and was a kind husband. But he suddenly went missing with his lover Yuka one day.

Yahagi Ken as Hayashi Shigeo
Hayashi Yuko’s husband. A househusband who wants to be a novelist. He gets along well with their son Daisuke.

Tamaoki Reo as Kanbara Shigeki
Kanbara Mari’s husband. A top lawyer. He is having an affair with his subordinate Yamashita Noriko, a new lawyer at his law firm who knows he is married but still gets into a relationship with him.

Abe Sadao as Konjakutei Marutaro
A popular rakugo (traditional Japanese comic) story teller. He instantly falls for Kanbara Mari when he meets her at a charity event and aggressively pursues her.

Koizumi Kotaro as Saiki Takumi
The husband of Saiki Yuka who ran away with Ishiwatari Shingo. He and Ishiwatari An are attracted to each other.

This blog contains information and musings on current and upcoming Japanese dramas but is not intended to be comprehensive.
View all posts by jadefrost →
This entry was posted in Fall 2020 Dramas, TBS/MBS and tagged Abe Sadao, Kimura Yoshino, Koi Suru Hahatachi, Koizumi Kotaro, Naka Riisa, Yoshida Yo. Bookmark the permalink.