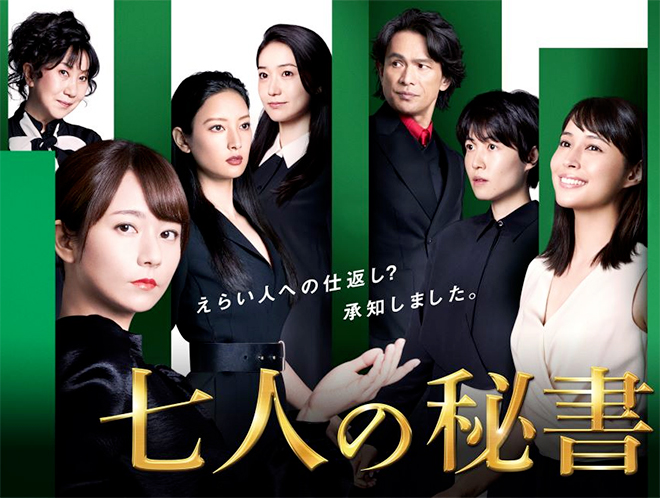 Story
Tohto Bank’s president Ichihara Fukuzo and his secretary Terui Nana are meeting in secret in a hotel’s VIP room. They are having a good time, but he suddenly begins to feel pain and loses consciousness. Then four women wearing hotel uniforms – Mochizuki Chiyo, Hase Fujiko, Park Saran, and Wanibuchi Satsuki – appear and try cardiopulmonary resuscitation. However, Ichihara dies despite their efforts. After a brief glance at Nana, who is deeply shaken and upset, they quietly proceed to get rid of the evidence left in the room. Meanwhile, at the front desk, Kazama Miwa orders the manager to delete Ichihara’s stay from the records. After that, the five of them leave like the wind under Miwa’s guidance. In fact, while Ichihara was still alive, he had asked Ban Keitaro, the owner of his regular ramen shop and a qualified judicial scrivener, to let him die at home no matter where he collapses. Chiyo, Fujiko, Saran, Satsuki and Nana rushed to follow his orders. While an uproar ensues over Ichihara’s sudden death, a stream of important people from political and business circles including Finance Minister Awataguchi Juzo visit the ceremony hall to pay their respects to him. Chiyo is in charge of presenting flowers to the mourners. Fujiko, the secretary of the Tokyo Metropolitan Police Department’s police affairs chief Kitajima Goji; Miwa, the secretary of Tokyo governor Minami Katsuko; Saran, the secretary of the director of Keisai University Hospital Nishio Tadahiko; pretend not to recognise one another as they accept the flowers from Chiyo and present them. While the role of the secretaries is to serve faithfully, they gather in secret behind the scenes to help people for a small fee by deftly using their skills, confidential information and network. At times, they get rid of ruthless leaders tainted by money and power. These secretaries along with the “shadow man” Ban who is their boss, and Satsuki the informant begin to change a Japanese society full of irrationality.

Characters
Kimura Fumino as Mochizuki Chiyo
The secretary to Tohto Bank’s managing director Yasuda Eiji. She was helping out at the ramen shop that her older brother ran but worked as a hostess at a Ginza club in order to survive, and rose to the top. However, the ramen shop closed down due to the unprecedented economic recession and her brother went missing. At that point, she met her older brother’s close friend Ban Keitaro again. She currently works as a secretary on a temporary basis while living on the second floor of the ramen shop that Ban bought back. Having experienced unreasonable incidents, she feels angry about the unfairness in the world.

Hirose Alice as Terui Nana
The secretary to Tohto Bank’s president Ichihara Fukuzo. A permanent employee at the bank, she did not want to become a secretary and is the easy-going type who gets yelled at for not being competent in her work. She is liked for her simplicity which sets her apart from other secretaries and she has been meeting the bank president in secret. She starts to develop a sense of professionalism as she watches Mochizuki Chiyo do perfect work.

Nanao as Hase Fujiko
The secretary of the Tokyo Metropolitan Police Department’s police affairs chief Kitajima Goji. She is having a hard time in the male-dominated police organisation. She is righteous and strong-minded. However, this is due to some incident in the past. She has a black belt in judo and is also good at sports.

Shim Eun-kyung as Park Saran
The secretary to the director of Keisai University Hospital. Born to a Korean mother and Japanese father, her medical knowledge is a cut above the rest and she is involved in secretarial work that requires specialised knowledge. She grew up in South Korea and wanted to become a doctor. However, she had to give up her dream for some reason. She is also an exceptional hacker.

Oshima Yuko as Kazama Miwa
The secretary to the governor of Tokyo. She is the daughter of a hotel owner but her family fell apart. She is envied for her affluent background but no one knows the despair she feels. She studied abroad and is an outstanding violinist.

Muroi Shigeru as Wanibuchi Satsuki
A housekeeper. She used to be a politician’s private secretary and did all in her power to support her boss. She became famous as a legendary secretary. However, she served jail time for causing some incident. She works behind the scenes together with the secretaries.

Eguchi Yosuke as Ban Keitaro
The owner of the ramen shop Ban. He is a judicial scrivener on the side. No one knows that he is the boss of a shadow army of secretaries. Together with five secretaries and Wanibuchi Satsuki, he helps people for a small fee. Although he used to be a politician’s secretary, he believed in being upright and incorruptible, but that ended up getting him fired.

Kishibe Ittoku as Awataguchi Juzo
The Finance Minister who holds sway over the political and business establishment. Born in Kyoto, his early life of misfortune propelled him into the world of politics. He rose to his present position after trampling on many people. Even though he appears to be an even-tempered man and treats secretaries kindly, he is very condescending. He has a considerable past connection with the “seven secretaries” including Ban Keitaro … …

Theme Songs
Who I Am & The Hardest by milet