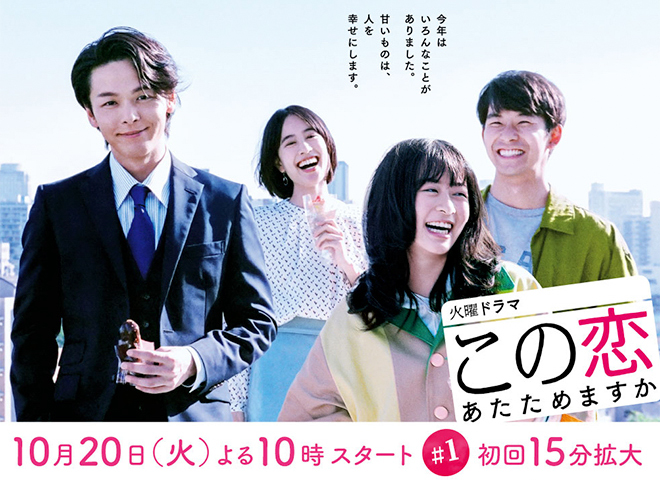 Story
“I want to make people happy.” These were the feelings that got Inoue Kiki fired from the idol group that she had been active in. With her dream now shattered, Kiki works lethargically at a Coco Every convenience store where she is a part-time employee. Her only pleasure is eating affordably priced convenience store sweets and posting her impressions of them on her social media handle Kikikajiri. One day, Kiki happens to meet Asaba Takumi and gets into an argument with him. He has been seconded from e-commerce company Exazon to the Coco Every convenience store chain where she works, and just became its young president and CEO. This is about to change Kiki’s destiny. Asaba has been tasked to turn around Coco Every which has the smallest market share in the industry. He comes up with a plan to transform the sweets which are standard products. But his plan is fiercely opposed by the Sweets Division while an appeal for ideas within the company, has not produced anything notable. Asaba feels at a loss. Meanwhile, he hears rumours about a social media account known as Kikikajiri that reviews sweets and has quietly attracted attention in the industry. Once he finds out that the person behind it is Kiki, he He decides to outdo the competition and secure his own success with her sweets. Both Kiki and Asaba finds themselves at odds. But as the two of them try to create sweets that will become best sellers for the convenience store, they gradually get drawn to each other.

Characters
Mori Nana as Inoue Kiki
A part-time employee at Coco Every’s Kami Meguro branch. She happens to meet Asaba Takumi, the CEO of Coco Every, one day. This leads to the two of them working together to create original sweets for the convenience store that will become bestsellers, and also changes her own destiny.

Nakamura Tomoya as Asaba Takumi
The CEO of Coco Every. After he graduated from Tokyo University, he worked at a foreign-owned online shopping company and was later charged with reforming the convenience store chain Coco Every. He happens to meet the part-time employee Inoue Kiki and appreciates her knowledge and ideas. He plans to outdo the competition, transform the chain and secure his own success with the original sweets she creates.

Nakano Taiga as Shintani Makoto
A patissier for convenience store sweets. He works for Dolce Kitchen, Coco Every’s specialty sweets producer, and creates recipes that can be turned into products. His family runs a well-known cake shop in his hometown but he did not follow in their footsteps and has his current job. He and Asaba Takumi come from the same hometown and he is his junior. While developing sweets with Inoue Kiki, he comes to respect her even though he gets confounded by her.

Ishibashi Shizuka as Kitagawa Riho
An employee who works for Coco Every’s Sweets Division. Although she is troubled that she cannot figure out what she wants to do in life, she is inspired by her boss Ichioka Tomoko to try her hand at creating sweets too. She comes up with ideas but has yet to produce results.

Riju Go as Tsuzuki Seiichiro
The sales manager of Exacon, a foreign-owned online shopping company that Coco Every formed a strategic business alliance with. He is Asaba Takumi’s boss and thinks highly of his capabilities. He also gives Asaba candid advice as he attempts to turn around Coco Every, “If you cannot gain people’s trust, they will not follow you.”

Yamamoto Koji as Kamiko Ryo
The executive director of Coco Every. He is one of the central figures in the faction opposed to Asaba Takumi who was hired from outside to be the CEO. He loves the convenience store because he worked his way up from the floor, and has the trust of the employees. He hears the voices from the stores rejecting Asaba’s reform drive and begins to raise an objection to Asaba’s proposal. He and Ichioka Tomoko used to date.

Sasamoto Rena as Shimizu Kaori
The granddaughter of the founder of the Coco Every and also the largest shareholder. She holds the key to the future of Coco Every, Inoue Kiki and Asaba Takumi.

This blog contains information and musings on current and upcoming Japanese dramas but is not intended to be comprehensive.
View all posts by jadefrost →
This entry was posted in Fall 2020 Dramas, TBS/MBS and tagged Kono Koi Atatamemasu ka, Mori Nana, Yamamoto Koji. Bookmark the permalink.