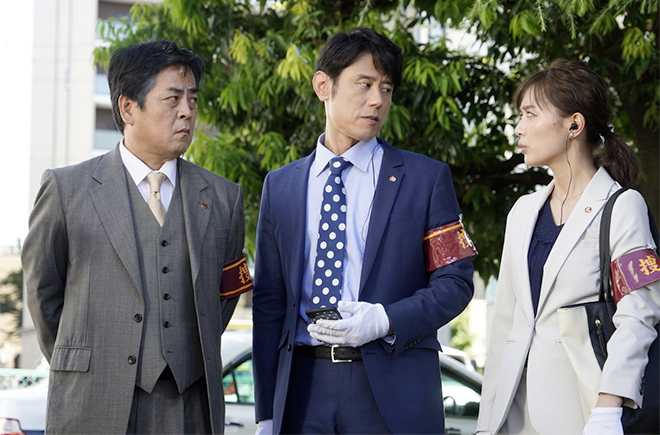 Date: From 8.00 p.m., 15 October 2020
Scriptwriter: Ogami Tadatoshi
Director: Otani Kentaro
Cast: Harada Taizo, Uchida Rio, Tatekawa Danshun, Matobu Sei, Shuhama Harumi, Konno Mahiru, Satoi Kenta, Oshinari Shugo, Fujii Mina, Aizawa Rina
Synopsis: A woman is found stabbed to death. The victim is Uraga Yumi (Matsuoka Izumi), the deputy CEO of an IT start-up. When Ninjo Hanako (Uchida Rio) and other detectives from the First Investigation Division’s Team Kawabe are investigating the crime scene, team leader Kawabe Issei (Tatekawa Danshun) notices that Urayasu Yoshiyuki (Harada Taizo), who should have come with them, is nowhere to be found. As Urayasu has a terribly poor sense of direction and his name is similar to the name of the legendary detective Yasuura Kichinosuke, he has been given the nickname Hagure Keiji Sansei. Urayasu later sneaks in to join them and immediately begins investigating. He interviews restaurant manager Mita Haruna (Fujii Mina), who was the first person to discover the dead body, but feels that her statement sounds a little odd. After that, he visits Yumi’s workplace and questions the CEO Osumi Mei (Konno Mahiru). Mei is known as a very beautiful IT engineer and has recently been suspected of having an improper relationship with a politician over grants for new technology development. On the other hand, Mei is sure that Furusawa Hidefumi (Satoi Kenta), the CEO of the general trading company Uei Trading, was the one who framed her. However, Furusawa flatly denies any involvement in the case. There has been an internal feud at Uei Trading between Furusawa and Uei Keisuke (Oshinari Shugo), who is a director of the company and son of the founder. Someone believed to be Uei was seen at the crime scene on the day of the murder. A number of other suspects also emerge. But after that the alibis of Mei, Furusawa and Uei are proven. Then Haruna suddenly reverses her statement and the police have to go back to the starting point of the case. Will Urayasu be able to get to the truth despite going a long way around.
Official Website: www.tv-asahi.co.jp/hagure3

This blog contains information and musings on current and upcoming Japanese dramas but is not intended to be comprehensive.
View all posts by jadefrost →
This entry was posted in Fall 2020 Drama Specials, TV Asahi and tagged Hagure Keiji Sansei, Harada Taizo, Matobu Sei. Bookmark the permalink.