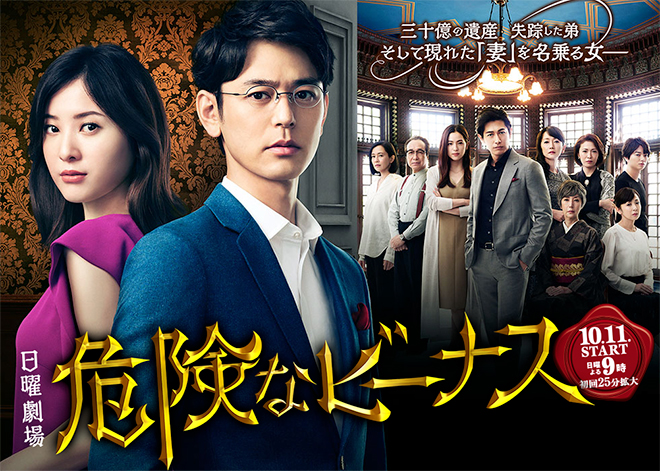 Story
Teshima Hakuro is a veterinarian and deputy director of a veterinary hospital. One day, an enigmatic beauty Yagami Kaede, who claims to be the wife of his younger brother Akito, suddenly shows up at the hospital. Hakuro is told that Akito has disappeared. Furthermore, Kaede believes some relatives are involved in Akito’s disappearance. These relatives are the Yagamis, a distinguished family that Hakuro’s mother Teiko married into after his father passed away when he was 5 years old. Although Hakuro became a member of the family, he felt small unlike his young brother Akito who was a Yagami by birth. Because of that, he chose to drift away from them once his mother died. Kaede tells him that now that the current head of the family is critically ill and Akito has a claim on the estate which is said to be worth 3 billion yen. the relatives who have designs on the inheritance may have abducted Akito. Hakuro had decided to steer clear of the Yagamis but he is unable to leave Kaede alone when she needs help and ends up going to the family mansion together with her. The family members including adopted son Yuma who has always treated Hakuro are all there. As Hakuro searches for Akito’s whereabouts with Kaede, the family’s unsettling actions begin to emerge one after another. He finds himself gradually attracted to Kaede’s mysterious charms even though his assistant Kageyama Motomi picks up on it and warns him about her … …

Characters
Tsumabuki Satoshi as Teshima Hakuro
A veterinarian who is the deputy director of Ikeda Veterinary Hospital. When he was five years old, his father died and his mother later remarried Yagami Yasuharu, the son of the distinguished Yagami family. Even though he became a member of the Yagami family, he felt inferior as a child from his mother’s previous marriage. Therefore, he chose to drop the Yagami surname and cut ties with the family. He has a strong sense of justice and a serious nature but he is very vulnerable against beautiful women.

Yoshitaka Yuriko as Yagami Kaede
A woman who claims to be the wife of Teshima Hakuro’s younger brother, Akito. She is cheerful and intelligent but has an air of mystery. She met Akito abroad when she was working as a cabin attendant and they got married. After that, she quit her job and helped out Akito who was doing IT-related work. They returned to Japan together after hearing that Akito’s father is in critical condition and to inform him of their marriage. But Akito disappeared immediately after that, and she asks her brother-in-law Hakuro to jointly search for him.

Sometani Shota as Yagami Akito
Teshima Hakuro’s half-brother from his mother’s second marriage. He is the only one descended from Yagami Yasuharu, the current head of the family, and has the right to inherit his father’s estate which is said to be worth 3 billion yen. Because he was outstanding from a young age, there were great hopes of him as a successor. But he was engrossed in research on artificial intelligence, and now does IT-related work in the US that makes use of artificial intelligence. He married Kaede whom he met by chance in the US. After learning that his father is in a critical condition, he returns to Japan but disappears shortly afterwards.

Hotta Mayu as Hasekura Yurika
The eldest daughter of the Hasekura family. Yagami Akito’s cousin. She is a book designer. She has liked Akito since she was a child. But when she learns that he got married, she treats Kaede with undisguised hostility.

Dean Fujioka as Yagami Yuma
Yagami Konosuke’s adopted son. He has a knack for business and runs several restaurants in Tokyo. A nasty guy who has always looked down on Teshima Hakuro who came to the Yagamis as a child from his mother’s previous marriage, and challenges him over every matter. He takes a fancy to Yagami Kaede who visits the family together with Hakuro in a bid to find Akito, and he makes advances even though he knows that she is Akito’s wife.

Aso Yumi as Yagami Sayo
Yagami Konosuke’s adopted daughter. She is the proprietress of an exclusive club. A coquettish and elegant woman who is insightful and observant.

Saito Yuki as Yagami Teiko
The mother of Teshima Hakuro and Yagami Akito. After Hakuro’s father died, she remarried Yagami Yasuharu and gave birth to Akito. She was in agony over associating with his relatives after marrying into the Yagami family. Even so, she tried to take good care of the family. She died in an accident 16 years ago when Hakuro was still a university student.

Kurihara Hideo as Yagami Yasuharu
Yagami Teiko’s second husband and Teshima Hakuro stepfather. The eldest son of Yagami Konosuke, he is the current head of the family and a doctor who is the director of Yagami General Hospital. He is suffering from terminal cancer and bed-ridden. He does not have much longer to live.

Toda Keiko as Yagami Namie
Yagami Yasuharu’s unmarried biological sister. She manages the family’s estate and looks after her bed-ridden brother. She sees herself as the person who will protect the family and is suspicious of Yagami Kaede who claims to be Akito’s wife.

Aran Kei as Hasekura Shoko
Yagami Yasuharu and Namie’s stepsister. Born to Yagami Konosuke and his second wife, her claim to her father’s fortune is weak because she left the family. However, she meddles in the inheritance of the estate. She is uses rough words and spends money lavishly.

Ikeuchi Mansaku as Yagami Makio
The son of Yagami Konosuke and his second wife. Hasekura Shoko’s biological younger brother. A doctor who is socially inept and only speaks when necessary.

Kurita Yoshihiro as Yagami Konosuke
The previous head of the Yagamis. He made brilliant contributions to the medical community as a doctor and an enormous fortune. A cunning and greedy man. He left this world after leaving behind a will that said he bequeaths all his personal assets to Yagami Akito.

Theme Song
Emerald by back number

This blog contains information and musings on current and upcoming Japanese dramas but is not intended to be comprehensive.
View all posts by jadefrost →
This entry was posted in Fall 2020 Dramas, TBS/MBS and tagged Aso Yumi, Dean Fujioka, Kikenna Venus, Kohinata Fumiyo, oda Keiko, Sometani Shota, Tsumabuki Satoshi. Bookmark the permalink.