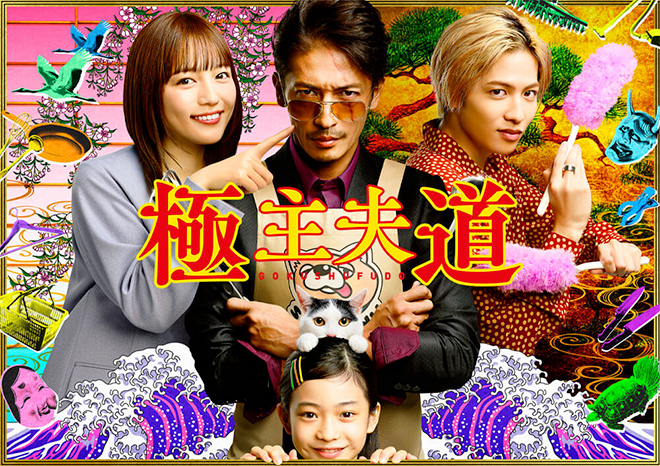 Story
Nicknamed Immortal Dragon, Tatsu was a legendary gangster until he chose to leave the yakuza. Legend has it that he would penetrate an enemy gang alone when there is a big clash and wipe them out in one night. Such stories about him have been handed down in the underworld. Tatsu starts to live a peaceful life with his wife Miku and their daughter Himawari. They got married after he resolutely promised Miku that he would not cause fights with people again. Tatsu concentrates on being a househusband and is busy every day doing all the housework from preparing lunch boxes to cleaning, washing and cooking for Miku who goes to work. He even joins the women’s association in town and completely fits in among the housewives as the scary-looking but kind man. On the other hand, Tenjakukai which Tatsu had belonged to is caught in a crisis. The rival Oshiroyama-gumi has extended its influence to Tenjakukai’s turf and pressed Tenjakukai to fall in line or be crushed. Even if there is a fight with Oshiroyama-gumi, it is unlikely that the Tenjakukai will win with its current might. Tenjakukai’s chairman Eguchi Kikujiro and his wife Hibari keep lamenting, “If only Tatsu was around … …” while Tatsu’s former underling Masa proclaims that he does not fear death if it is to protect the gang. When Tatsu comes out of a supermarket after shopping for groceries, Masa is waiting for him. He tells Tatsu about Tenjakukai’s situation and pleads with him to return to the gang. Tatsu rejects Masa, saying that he has become a househusband. Even so, Masa will not give up. One day, Tatsu encounters Oshiroyama Kunimitsu, the boss of Oshiroyama-gumi, when he is serving as a traffic warden in front of the elementary school that Himawari attends. Oshiroyama deliberately provokes him by saying, “Even the Immortal Dragon has fallen.” Then Tatsu is summoned by Eguchi who complains of Oshiroyama-gumi’s tyranny and asks for his help. Meanwhile, the tension between Tenjakukai and Oshiroyama-gumi escalates and an incident happens. Tatsu can no longer bear to see the people that he is indebted to with their backs against the wall … …

Characters
Tamaki Hiroshi as Tatsu
A former gangster who was the feared Immortal Dragon of the underworld. However, after he cut ties with the underworld, he got married to Miku and has been a devoted house husband. He hides his fierce looks behind sunglasses and puts on an apron printed with a shiba inu illustration over his suit. However, he still continues to have the appearance and the behaviour of a gangster. As a result, he often terrifies the people around him even though he is oblivious to it. Despite Tatsu’s appearance, he is a loving and endearing househusband who refreshingly fixes problems.

Kawaguchi Haruna as Miku
Tatsu’s wife. A career woman who works as a designer. She is a little ditzy. Unlike Tatsu, she is not only very careless but also terrible at tidying up as well as cooking. That is why she leaves the housework to him.

Shiratori Tamaki as Himawari
The daughter of Tatsu and Miku. She is an elementary school student but precocious for her age. In fact, she is more grown-up than her mother in some way.

Shison Jun as Masa
Tatsu’s former underling who continues to admire him even now. The gang has been on the decline since Tatsu left and he keenly wishes that Tatsu will return to the underworld. He has a straightforward nature and is loved by everyone but he also has a slightly awkward side. He cannot understand how hard it is to do housework and frequently gets yelled at by Tatsu.

Takito Kenichi as Torajiro
Called Gouken Tiger, he and the Immortal Dragon were equals in the underworld. However, he later caused some incident and served time in prison. He now runs a crepe stand alone.

Megumi as Tanaka Kazuko
The chairwoman of the women’s association in Karyu-cho where Tatsu and his family live. She acknowledges him as a fellow housewife. On the other hand, she tries to make use of his superb househusband skills for her own benefit and is also a tough woman.

Takenaka Naoto as Eguchi Kikujiro
The chairman of Tenjakukai. Although he is no match for his wife Hibari, he unreasonably yells at Masa frequently. After Tatsu left the underworld, he has been thinking about restoring Tenjakukai’s former glory.

Hashimoto Jun as Oshiroyama Kunimitsu
The boss of Oshiroyama-gumi which has a hostile relationship with Tenjakukai. He and his men somehow keep coming to pick fights with Tenjakukai and Tatsu.

This blog contains information and musings on current and upcoming Japanese dramas but is not intended to be comprehensive.
View all posts by jadefrost →
This entry was posted in Fall 2020 Dramas, NTV and tagged Goku Shufudo, Inamori Izumi, Kawaguchi Haruna, Shison Jun, Tamaki Hiroshi. Bookmark the permalink.