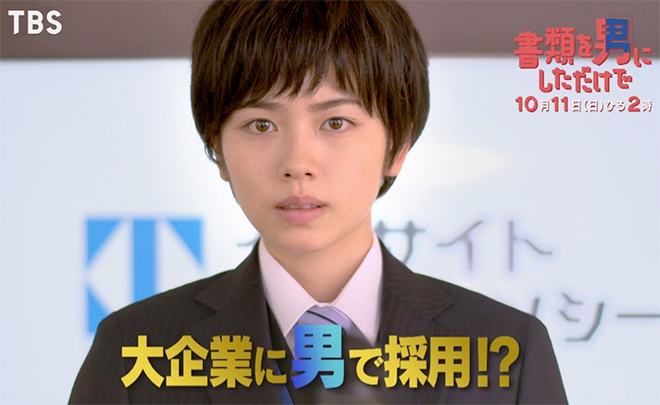 Date: From 2.00 p.m., 11 October 2020
Scriptwriter: Ino Yoko (Wagaya no Mondai, Ima Ai ni Yukimasu, Tobousha)
Director: Ishii Yasuharu
Cast: Koshiba Fuka, Ryusei Ryo, Mizusawa Erena, Okuno So, Takahashi Maryjun, David Ito, Tomochika
Synopsis: Minowa Yuki (Koshiba Fuka) was fired from her last job because she threw her boss over her shoulder for sexual harassment. She has been looking for a new job. However, she has not been successful probably because she is too strong-willed. On top of that, she was dumped by her boyfriend, adding to her string of bad luck. There is one company where Yuki has made it to the final round. It is Insight Agency, one of the advertising industry’s largest agencies which she has always admired. Yuki braces herself for the medical checkup which is also for the final selection. But she discovers when she is there that her gender has been registered as male. Kashiawagi Miki (Takahashi Maryjun), the doctor who is in charge of the medical checkup, warns Yuki that she will be dropped if she says that she is a female at this point. Feeling under pressure and with thoughts of how she kept failing in the past as a female flashing in her mind, Yuki makes the decision to continue pretending that she is a male and join the company. She strives to prevent the truth from being exposed as she does her best at work. However, she meets a colleague Sugita Tetsuya (Ryusei Ryo), whom she used to have a crush on, again … …
Official Website: www.tbs.co.jp/program/shorui_otoko_20201011

This blog contains information and musings on current and upcoming Japanese dramas but is not intended to be comprehensive.
View all posts by jadefrost →
This entry was posted in Fall 2020 Drama Specials, TBS/MBS and tagged Shorui o Otoko ni Shita dake de. Bookmark the permalink.