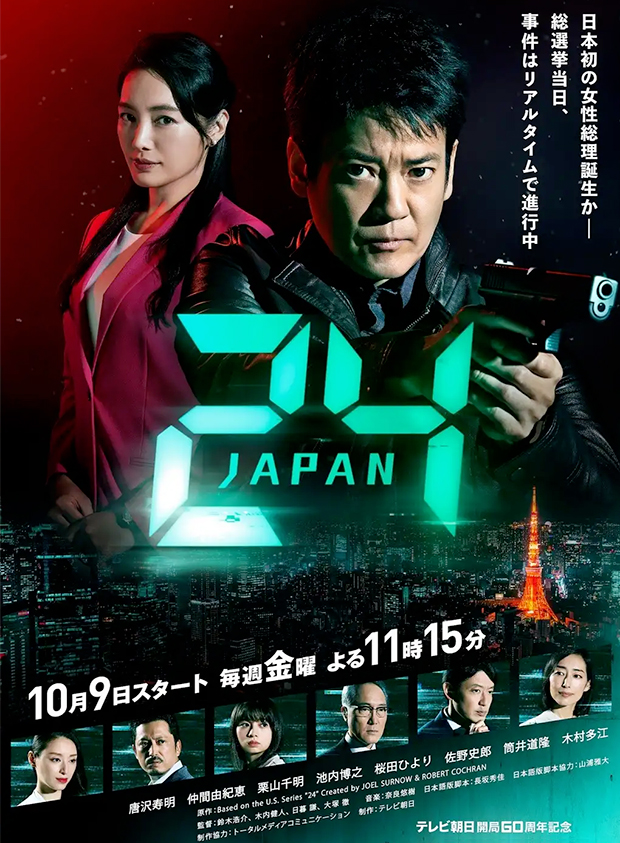 Story
Shido Genba is the leader of Team A of the Counter Terrorism Unit’s First Branch headed by Onitsuka Genji. His previous missions include the rescue of Japanese nationals held hostage overseas and blowing up a chemical weapons factory used by terrorists. It is midnight on the day of the general election and there are mounting expectations that the country will have its first female prime minister. Shido and his daughter Miyu are enjoying a game of cards at home. But right after that, he discovers that Miyu had sneaked out of the house after going back to her own room. A worried Shido is about to search for her but he is hastily summoned by Satonaka Heisuke, the chief of the Tokyo Counter Terrorism Unit. They have received information about a plot to assassinate popular female prime ministerial candidate Asakura Urara in the next 24 hours. With no time to lose, the members of the unit try to find out the points of contact between Urara’s close aides and the terrorist to foil the assassination. Meanwhile, Satonaka separately tells Shido whom he trusts, that there is a traitor in the Counter Terrorism Unit and orders him investigate. While Shido is on this top secret mission, Onitsuka Genji who heads the First Branch shows up and gives him “new information”. However, Shido finds his behaviour suspicious. At that moment, a terrifying plot that will soon shock the country is in progress in a passenger jet flying far away. Will Urara be able to escape the attempt, win the election and become the prime minister?

Characters
Karasawa Toshiaki as Shido Genba
A team leader in Team A of the Counter Terrorism Unit’s First Branch. While he carries out missions without concern for danger, he also understands the importance of holding his ground if the situation calls for it. He is an outstanding man with good sense who will also make daring decisions for the sake of justice. He is trusted by Satonaka Heisuke, the head of the Tokyo Counter Terrorism Unit. There was a problem between him and his wife Rikka at one time and they separated. On the other hand, he established a good relationship with their only daughter Miyu. He has a classified mission to prevent the assassination of the prime ministerial candidate on the day of the general election. However, Miyu is also kidnapped at the same time, … …

Kimura Tae as Shido Rikka
Shido Genba’s wife. Although she was living apart from him for a while due to an issue, they are now back together again and have returned to being on good terms as a couple. However, their daughter Miyu does not know the reason for their separation and seems to have misunderstood the circumstances and will not talk to her. She is distressed about her strained relationship with Miyu. Then Miyu gets abducted. Unable to sit around and wait, she desperately scrambles to search for her daughter.

Sakurada Hiyori as Shido Miyu
The only daughter of Shido Genba and Rikka. She is obedient and very attached to her father. However, she thinks that the reason why her parents previously separated was because her mother kicked her father out. She completely ignores her mother out of resentment and even rebels by calling her “that person” behind her back. Right before the general election, she sneaks out of the house in the middle of the night and ends up getting kidnapped.

Nakama Yukie as Asakura Urara
She enjoys strong support from the public and is expected to become Japan’s first female president. She has also made her presence felt as the head of the political party, Minseto. A cautious and intelligent woman who is accomplished in both sports and studies. A mother with a son and daughter, she and her husband Yohei have been working closely together in politics and this is widely known. She values personal relationships and has a strong clean image as someone who will not yield to power but there is also another side to her. On the day of the general election, a plot to assassinate Urara is discovered and a big problem concerning her family also happens … …

Tsutsui Michitaka as Asakura Yohei
Asakura Urara’s husband. A second-generation politician who is highly educated and has a lot of influence in political circles. He and Urara have been working closely together in politics and thoughtfully supporting each other both in public and private. He is cool and collected and also mild-mannered. Even though he is perceived as a good husband by the public, there are also voices mocking him as “simple”. On the day of the general election which will determine whether his wife becomes the country’s first female prime minister, a plot to assassinate her is discovered. He shows an unexpected side … …

Kuriyama Chiaki as Mizuishi Itsuki
The chief of Team A. She always has a poker face regardless of the situation, handling it calmly and resolutely. She is very competent in her work and also trusted by Shido Genba. Something personal seems to have gone on between her and Shido in the past. On the day of the general election, she assists Shido who is on a top-secret mission to investigate the plot to assassinate Asakura Urara. However, questions about her that will rock the organisation soon come to light.

Ikeuchi Hiroyuki as Nanjo Takumi
Team A’s cryptanalysis manager. Mizuishi Itsuki’s boyfriend. Although he has outstanding cryptanalysis skills, he is rather immature and rebels against Shido Genba who is self-righteous and stands out for his secretive solitary action. In addition, he is also curious about the matter that Shido has made Itsuki assist him on without the knowledge of the others and pries into their actions. He eventually makes a bold move that embroils the organisation … …

Sano Shiro as Onitsuka Genji
The head of the Tokyo Counter Terrorism Unit’s First Branch. A shrewd man whose priority is his career progression. He suddenly calls on Shido Genba, who is on a classified mission to prevent the assassination of female prime ministerial candidate Asakura Urara, and hands over something from an unknown source. He instructs Shido to use it to obtain classified information on the assassination plot. He considers Shido dangerous.

Murakami Hiroaki as Satonaka Heisuke
The head of the Tokyo Counter Terrorism Unit. He is a warm man but does not let his emotions sway him in his work and acts on precise judgement. He convenes Team A and puts them in charge of a top-secret mission to prevent the assassination plot. At the same time, he also obtains intelligence that there is a traitor in the Counter Terrorism Unit who is involved in the plot. He gets Shido Genba, whom he trusts, to investigate it secretly but … …

This blog contains information and musings on current and upcoming Japanese dramas but is not intended to be comprehensive.
View all posts by jadefrost →
This entry was posted in Fall 2020 Dramas and tagged Karasawa Toshiaki, Kimura Tae, Kuriyama Chiaki, Nakama Yukie, Sano Shiro, Tsutsui Michitaka. Bookmark the permalink.