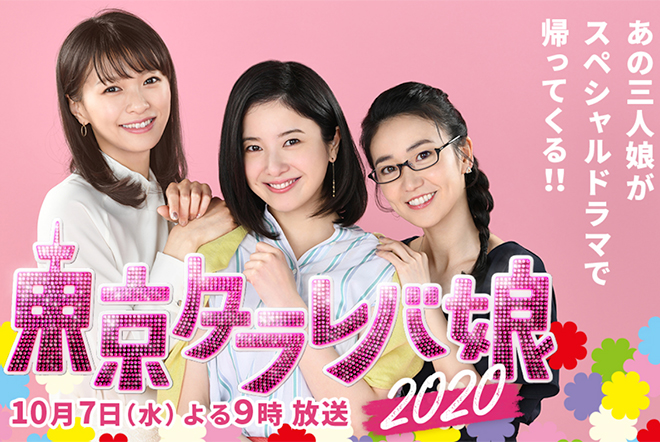 Date: From 9.00 p.m., 7 October 2020
Original Work: Tokyo Tarareba Musume by Higashimura Akiko
Scriptwriter: Matsuda Yuko (Seigi no Se, Tokyo Tarareba Musume, Hanasaki Mai ga Damattenai Series)
Director: Suzuki Yuma
Cast: Yoshitaka Yuriko, Eikura Nana, Oshima Yuko, Sakaguchi Kentaro, Hiraoka Yuta, Ishikawa Ren, Kato Ryo, A-chan, Matsushita Kohei, Watanabe Daichi, Kaneda Akio, Tanaka Kei, Suzuki Ryohei
Synopsis: It has been three years since Kamata Rinko (Yoshitaka Yuriko) and her girlfriends Yamakawa Kaori (Eikura Nana) and Torii Koyuki (Oshima Yuko) kept musing over hypothetical “what if” questions as they struggled with romance and work. The three of them who have been good friends from the time they were in high school are now 33. Kaori married a former elementary school classmate Hirasawa Yu (Watanabe Daichi) after a whirlwind courtship. Koyuki is busy getting prepared to open the cafe of her dreams while Rinko’s lacklustre situation as a scriptwriter continues to persist although she has been dating Asakura Riichi (Matsushita Kohei), who works at a library, for about a year. Kaori and Koyuki think it is about time Rinko gets a proposal, and their prodding makes her start considering marriage. When Rinko is on a date with Riichi one day, she blurts out, “How about we get married?” Then she hastily tries to retract her remarks. Although Riichi is surprised, he agrees with a smile. Rinko is on cloud nine as she reports to Kaori and Koyuki that they are truly going to marry. This is supposed to be the happiest moment of her life. However, Key (Sakaguchi Kentaro) who had gone to the US as an actor, shows up. Rinko cannot hide her shock at the reappearance of the man with whom many things happened three years ago, and her girlfriends worry about the timing of their reunion. As Rinko prepares for her wedding, Kaori begins to have slight doubts about married life with her husband Yu. Meanwhile, Koyuki acutely feels the reality of falling behind after her two friends have pipped her to marriage. Key himself wavers when asked by Hayasaka Tetsuro (Suzuki Ryohei) how he feels about Rinko getting married. The day of Rinko’s wedding ceremony finally arrives as each of them try to come to terms with their own feelings. Will Rinko, Kaori and Koyuki be able to find happiness?
Official Website: www.ntv.co.jp/tarareba2020
Twitter: twitter.com/tarareba_ntv

This blog contains information and musings on current and upcoming Japanese dramas but is not intended to be comprehensive.
View all posts by jadefrost →
This entry was posted in Fall 2020 Drama Specials, NTV and tagged Eikura Nana, Suzuki Ryohei, Tokyo Tarareba Musume Series, Yoshitaka Yuriko. Bookmark the permalink.