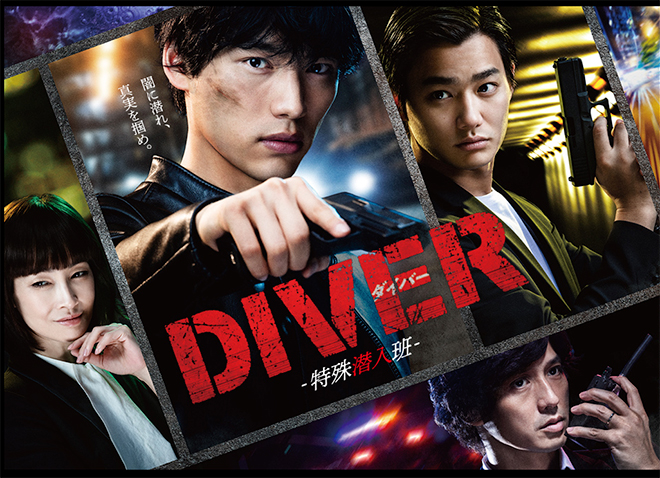 Story
28-year-old Kurosawa Hyogo used to be a habitual criminal but he became an investigator of the Hyogo Prefectural Police’s undercover team, known as the D Team, under police chief Akutsu Yoko. Formed under a cloak of secrecy to combat the sharp increase in criminal organisations, the D Team is led by Date Naoya and includes white hacker Miyanaga Soichi. The team members are “divers” sent on dangerous missions to infiltrate all sorts of criminal organisations to obtain information and evidence of crimes. Kurosawa is willing to make sacrifices and constantly put his life at risk in undercover investigation. He uses rather ruthless methods to root out evil with his own brand of justice. There has been a high incidence of bank transfer-related fraud such as the “It’s me, send money” scams amounting to an annual 39 billion in total financial damage in the Hyogo Prefectural Police’s jurisdiction. Kurosawa infiltrates a company that makes illegal loans and is believed to be involved in these cases in some form. He gets in contact with the company’s CEO Kaito Takeshi to determine what is really going on. At that moment, Sanemura Sho who graduated at the top of his class in the National Defence Academy and is on the fast track as an officer in the Maritime Self Defence Forces, visits Akutsu Yoko. He has been invited by Akutsu to join Team D and decided to resign from the Self Defence Forces to find out the truth about something.

Characters
Fukushi Sota as Kurosawa Hyogo
A member of D Team. He was in his teens he was a habitual offender who committed theft and violence. But he came to the attention of Akutsu Yoko for his high IQ that devised ingenious tricks which gave the police a tough time, judgement and physique and he was made a member of the D Team which was established in secret. He is willing to put his life at risk. Even though he gets tainted by evil the closer he gets to it, he will stop at nothing to root out evil. He is violent at times and coolheaded at others when confronting criminals.

Nomura Shuhei as Sanemura Sho
A member of D Team. Kurosawa Hyogo’s rival who goes on dangerous undercover investigations with him. He did well in both studies and sports and graduated from the National Defence Academy at the top of his class. Although he pursued an elite track as an officer of the Maritime Self Defence Forces, he was invited by Akutsu Yoko to join the D Team. He quit the Maritime Self Defence Forces and chose to enter in order to get of some truth.

Hamano Kenta as Miyanaga Soichi
He is in charge of D Team’s IT. He is good at hacking. Even though it is difficult to know what is on his mind, he

Katase Nana as Minamoto Reiko
A “back-alley doctor” who provides medical treatment in the middle of the night. She also treats those who belong to the underground.

Ando Masanobu as Date Naoya
The leader of D Team and also a member of the Hyogo Prefectural Police’s Organised Crime Department. He is the only one besides Akutsu Yoko who knows about the existence of the D team, Kurosawa Hyogo and Sanemura Sho. Although he is curt and short-tempered, he is a kind person. The concept of a team is very important to him. He does not know what to do about Kurosawa’s self-centredness. His wife passed away and he has a daughter in high school.

Masana Bokuzo as Kagami Koichi
Date Naoya’s boss. He only cares about his own career advancement.

Ryou as Akutsu Yoko
A top female official in the police who is in charge of the D Team. She topped the Tokyo Metropolitan Police Department’s examination. While building her career, she recognises Kurosawa Hyogo’s potential and proposes that he do undercover investigations after his arrest. She was transferred to the Hyogo Prefectural Police as a strategy of the top brass who could not stand her career and influence at the Tokyo Metropolitan Police Department. Even though she heads a prefectural police force as the chief of the Hyogo Prefectural Police, she mobilises the D team covertly and obtains confidential information.

This blog contains information and musings on current and upcoming Japanese dramas but is not intended to be comprehensive.
View all posts by jadefrost →
This entry was posted in Fuji TV, Summer 2020 Dramas and tagged Ando Masanobu, Diver, Hamano Kenta. Bookmark the permalink.