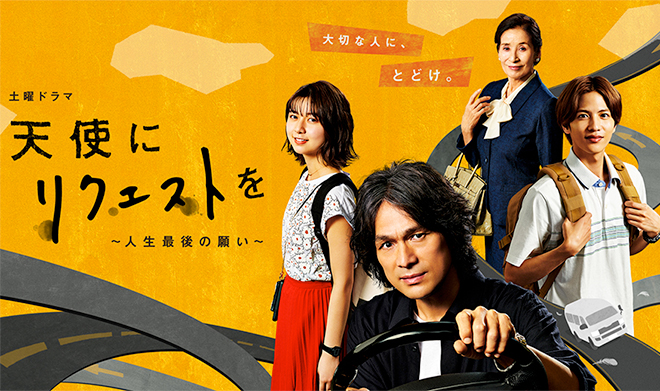 Story
Shimada Shugo, a former detective who investigated gangs, has an investigation agency and an assistant Kojima Akari. But he has no motivation to work and spends his days drunk. One day, he gets an unusual request from an old woman Sato Kazuko who looks wealthy. She met Omatsu Mikie while hospitalised. As Mikie does not have much longer to live, Kazuko wants to bring her to Fujinomiya so that she can fulfil her last wish. Kazuko states that she will spare no expense. She even sends a resourceful male nurse Teramoto Haruki as an attendant and talks about wanting to continue with this activity. Despite Shimada’s suspicions about the reason why he was chosen, he accepts the request after some prodding by Akari. Mikie expresses her wish to find the child she once abandoned there and to apologise. The leader of a gang is a prime candidate. However, Shimada lost his son and split up with his wife Tokie in connection with a gang. As Shimada starts to come in contact with patients’ lives. This also becomes a journey to reexamine his own past. However, Kazuko’s own last wish is hidden beneath … …

Characters
Eguchi Yosuke as Shimada Shugo
A former investigator of organised crime groups. Although he was an outstanding and caring detective, the loss of his son in a case caused his separation from his wife and also cost him his job. He has been leading a dissolute, destructive life. However, after he accepts a strange request to fulfil a last wish, he also begins to reexamine his own past.

Kamishiraishi Moka as Kojima Akari
Shimada Shugo’s assistant. She was once saved by Shimada right when she nearly went astray but she ends up feeling guilty for causing Shimada to be unhappy. She idiolises Shimada who resigned from the police force and started an investigation agency. She is constantly there for him and hopes that he will pull himself together.

Shison Jun as Teramoto Haruki
An motivated male nurse who learned the latest techniques and concepts in Europe. Although he has made a career as a home care nurse just like his mother, he learned about activities to fulfil last wishes while studying abroad. He identifies with it and participates as a volunteer. He frequently comes into conflict with Kojima Akari because he is too idealistic and stubborn.

Itaya Yuka as Shimada (Mitsui) Tokie
Shimada Shugo’s ex-wife. She had a happy family with Shimada but their relationship rapidly deteriorated after their son Seiya’s unfortunate death. They divorced and she is now helping her father at his soba shop.

Kaji Meiko as Omatsu Mikie
The first person with a last wish. She made the acquaintance of Sato Kazuko while in hospital. She wishes to see the child that she once abandoned.

Yamamoto Gaku as Mitsui Shinkichi
The father of Shimada Shugo’s ex-wife Tokie. After he learns about Shimada’s activities, he contacts him without his daughter’s knowledge. He wishes to do the pilgrimage route known as the Fudasho Meguri in the Chichibu area in Saitama Prefecture.

Saigo Teruhiko as Takatsugawa Naoya
An ex-detective who was a colleague of Shimada Shugo’s father. He was Shugo and Tokie’s matchmaker and is like a father concerned about their future.

Baisho Mitsuko as Sato Kazuko
A mysterious old woman who comes to Shimada Shugo with the request to fulfil a last wish. She seems to be a wealthy woman but what is her true identity?

This blog contains information and musings on current and upcoming Japanese dramas but is not intended to be comprehensive.
View all posts by jadefrost →
This entry was posted in NHK, Summer 2020 Dramas and tagged Baisho Mitsuko, Eguchi Yosuke, Itaya Yuka, Kamishiraishi Moka, Shison Jun, Tenshi ni Request o. Bookmark the permalink.