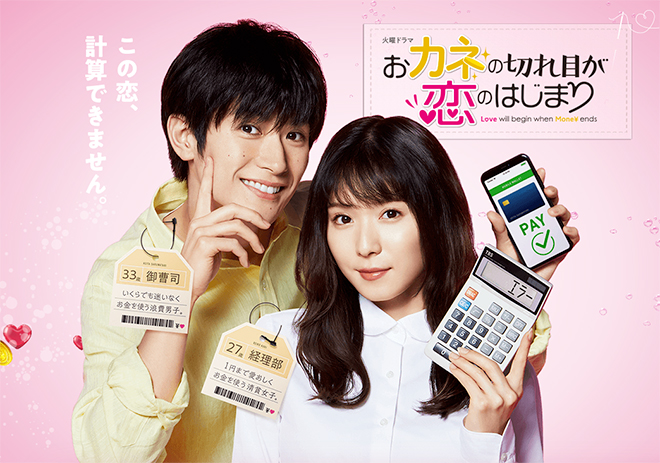 Story
Kuki Reiko works for the accounting department of Monkey Pass, a mid-sized toy manufacturer, and has a unique concept of money due to an incident in the past. She is particular about putting money to the right use and values the essence of the things that she loves rather than their monetary value. The day finally comes for her to go and purchase a 1,680 yen small plate that she has fancied for a year. She will place this handmade plate as a coaster in her room together with her beloved small plates. However, the moment she is about to buy it, a flamboyantly dressed man with a woman buys the small plate. This man is Saruwatari Keita, who is the son of the CEO of the toy manufacturer that Reiko works for. His father Tomihiko is so infuriated by his extravagant spending that he transfers Keita from the sales department to learn about money. Keita arrives at the accounts department in the worst sort of “reunion”, and Reiko is named his instructor. The unapologetic Keita is the exact opposite of Reiko and his spendthrift ways amaze her. Reiko’s peaceful daily life drastically changes. But that is not all. Some incident causes Keita to end up living in her house, and she gets to know an unexpected side to him. Realising that Keita may not have his heart in the wrong place, Reiko starts to teach him the right way to use money both at work and in private. First, she hands him a notebook to keep track of his expenses. Then she brings him to a public lecture about money by a certified public accountant Saotome Ken. Keita sees her gaze intently at Saotome. One day, they discover someone has illegally put Monkey Pass’ goods on sale on a flea market app. At the same moment, Reiko finds a “hole” relating to Itagaki Jun, a junior colleague in the sales department, that makes her curious and she begins to investigate. Keita also lends a hand and they arrive at a shocking truth.

Characters
Matsuoka Mayu as Kuki Reiko
A woman who is single-minded in both objects and love. She works for the accounting department of Monkey Pass, a mid-sized toy manufacturer. This is like a calling for her as she finds meaning in making proper use of money. She is fixated on how money should be spent due to an incident that happened in the past. She believes that if something she likes is worn out after continued use, her attachment will grow even further by patching it up. Her favourite book is Kamo no Chomei’s Hojoki, known as The Ten Foot Square Hut. She lives in Kamakura with her mother in a traditional Japanese-style house which is a guesthouse. She has had feelings for her first love Saotome Ken for 15 years.

Miura Haruma as Saruwatari Keita
A guy who has too many wants. He is the son of Saruwatari Tomihiko, the CEO of Monkey Pass. As he grew up in an environment where he was showered with love and his mother bought him everything he wanted, he has no concept of budget, income and expenditure. However, he has no malice and endears himself to people because he is friendly and good at getting others to spoil him. He also behaves the same way that he does with objects when it comes to love. He falls in love with one new girl after another and this creates mayhem but he has a devil-may-care attitude. Then he meets Kuki Reiko and starts to grow up in the course of mending his spending habits.

Miura Shohei as Saotome Ken
Kuki Reiko’s first love. A certified public accountant and financial planner who puts his very good looks to use. As a financial expert, he is also a commentator on television programmes and has gained popularity. He is in charge of a university’s public lecture for working people about money. Reiko has been attending these lectures like a stalker since the start. But she has to scramble for a seat as it quickly reaches capacity because of his popularity. He has friendly, sparkly facade but is shadowy and enigmatic beneath.

Kitamura Takumi as Itagaki Jun
Saruwatari Keita’s junior. A guy whose grievances are all connected to money. The factory which his parents run is in financial difficulties. His mother can barely work because she had to take care of his grandmother, his younger sibling are still students and he also has an outstanding university loan to repay. It is a classic case of a life of poverty. As the breadwinner of the family at the age of 25, he is under a lot of pressure. Because he is very anxious about old age, he fears using money and excels at economising through points and coupons. He needs a wife who works in order to have a secure old age and is distressed that economising and romancing are incompatible. That is when he meets Kuki Reiko and feels that this is fate.

Seira Hitomi as Seitoku Maria
Saruwatari Keita’s ex-girlfriend who works for an apparel company’s PR department. She is just shy of 30 but persists in using cuteness as her weapon. She works hard to make money and is stressed. She spends money endlessly with the excuse that it is all for self-improvement but she is living hand to mouth.

Otomo Karen as Ushijima Ruri
Saotome Ken’s secretary. She is a business-like woman who is able to handle even potentially unauthorised or illegal work without emotion and devotes herself to boosting sales. She thinks she and Saotome are the best partners, and she knows everything about him.

Minami Kaho as Kuki Sachi
Kuki Reiko’s mother. She offers lodging at her traditional Japanese-style house in Kamakura to tourists. She is a generous person and because she enjoys watching people’s happy faces, she will unintentionally end up exceeding the budget to prepare a feast. She always waits until her daughter is not around before she fritters away money. When she is warned by Reiko, she will apologise but quickly buy again.

Kusakari Masao as Saruwatari Tomihiko
Saruwatari Keita’s father. He worked his way up the ranks and became the second CEO of the company after he got married to Nanako, the daughter of the founder. It troubles him that he and his wife have a different concept of money. He is a very serious man and there has been a longstanding gulf between him and Keita who is very different. He is opposed to his son becoming the next CEO … …

Kimura Midoriko as Saruwatari Nanako
Saruwatari Keita’s mother. The daughter of the founder of a toy company, she has never known hardship and like her son Keita, has no sense of the value of money. She dotes on her only child, protects him in every matter and gives him an allowance. It is all well-intentioned … …

This blog contains information and musings on current and upcoming Japanese dramas but is not intended to be comprehensive.
View all posts by jadefrost →
This entry was posted in Summer 2020 Dramas, TBS/MBS and tagged Kusakari Masao, Matsuoka Mayu, Minami Kaho, Miura Haruma, Miura Shohei, Okane no Kireme ga Koi no Hajimari, Oshima Satomi, Otomo Karen. Bookmark the permalink.