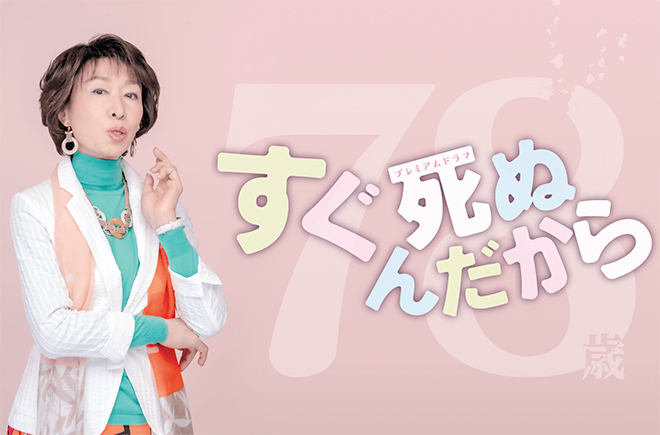 Story
Elderly people frequently like to say “I’m going to die soon anyway”, as if there would be nothing to say in response to that. But 78-year-old Oshi Hana resists this seemingly immediate retort when her guard is down. She is a woman who is particular about her appearance. 10 years ago, she was told by a boutique staff that she only looked a little like 70. That was when she realised that she would have to step up efforts to look younger than her age. Hana has passed on the alcohol shop that she and her husband Iwazo had been running to their son Yukio, and live in retirement in an apartment nearby. Believing that people past the age of 60 should make effort so that their actual age is not discernible, she has maintained her beauty and youth and beams with pride at the first class gathering in 10 years. Iwazo’s favourite phrase is, “It’s a good thing I married Hana”. Surrounded by her kind husband, two children and their grandchildren, Hana believes that she will have a reasonably happy old age. But Iwazo collapses all of a sudden and life takes an unexpected twist. How will she come to terms with the situation and what would she choose?

Characters
Mita Yoshiko as Oshi Hana
A 78-year-old who realised that she looked older than her actual age 10 years ago. She has kept old age at bay and is enjoying living in the moment but … …

Ono Takehiko as Oshi Iwazo
Oshi Hana’s husband of more than 50 years. He is one year her senior. He has passed on the alcohol shop that he inherited from his parents to his son Yukio. Origami is his only hobby.

Matsushita Yuki as Kuroi Mai
The Oshis daughter. Her much talked about blog provides advice on life matters.

Murasugi Seminosuke as Oshi Yukio
The Oshis son. He runs the family’s alcohol shop. His wife Yumi is his weakness.

This blog contains information and musings on current and upcoming Japanese dramas but is not intended to be comprehensive.
View all posts by jadefrost →
This entry was posted in NHK, Summer 2020 Dramas and tagged Matsushita Yuki, Ono Takehiko, Sugu Shinun Dakara, Yo Kimiko. Bookmark the permalink.