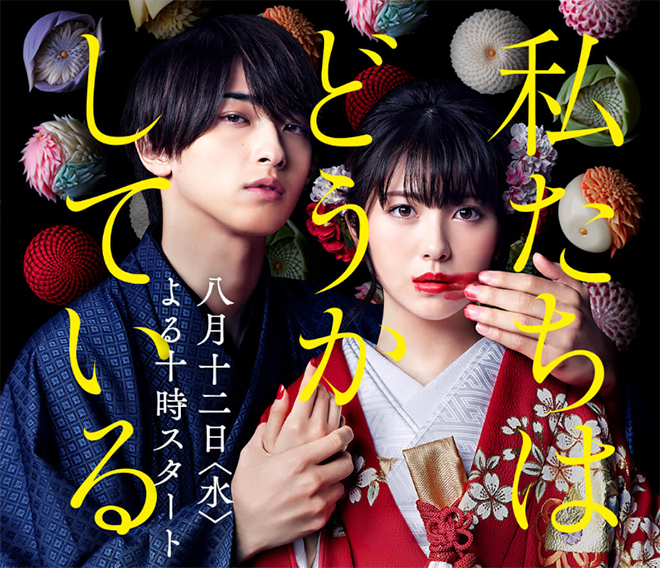 Story
21-year-old Hanaoka Nao is a talented, young woman who is passionate about making traditional Japanese sweets known as wagashi. One day, she is asked by Mayu, a regular customer and a daughter of the head family of one of the tea ceremony schools, to agree to a contest on traditional Japanese sweets that will determine the wedding favours. Nao rejoices at the chance for many people to try her creations. However, she is at a loss for words when she learns that her competitor will be Kogetsuan, a traditional Japanese confectionery shop in Kanazawa which has a 400-year history. This was the same shop that robbed her of everything 15 years ago. Back then, a young Nao lived in Kogetsuan with her mother Yuriko who made traditional Japanese sweets, and she grew interested in such creations. She was the same age as the cheerful and friendly Takatsuki Tsubaki, the only son of the owner of Kogetsuan. They become each other’s first loves. But one morning, Nao found a bloodstained Tsubaki standing next to his father Itsuki who was lying in a pool of blood. Itsuki was stabbed to death by someone. According to Tsubaki’s testimony, Yuriko was the one who killed his father. Nao’s mother was arrested but passed away while under interrogation and Nao was kicked out because of his words. The only thing that sustained her emotionally was making traditional Japanese sweets. Nao chooses to bow out rather than compete against Kogetsuan. But she is suddenly dismissed from the shop where she lives and works because of the daily emails to the shop that say her mother is a murderer. As she leaves, a male stranger shows up and hands a letter from her mother that had been in his safekeeping. Now that Nao knows how her mother felt, she prepares to compete with Kogetsuan. On the day of the contest, Nao comes face to face with Tsubaki whom she has not seen in 15 years. She unexpectedly stiffens at his cold confidence. Tsubaki does not seem to realise who she is as they compete on the cherry blossom theme. Drawn to Nao’s creation, Tsubaki suddenly proposes to her right after the contest. Nao decides to hide her true identity and get into Kogetsuan through her marriage to Tsubaki in order to prove her mother’s innocence. Little does she know that all sorts of adversities are coming her way. Despite being made sport of by cruel fate as murder suspect’s daughter and victim’s son, Nao and Tsubaki get closer as the days pass. What is the truth of the case 15 years ago?

Characters
Hamabe Minami as Hanaoka Nao
She is training as a traditional Japanese sweets maker. She inherited her mother Yuriko’s talent for making unconventional and thoughtful sweets and those that she creates capture people’s hearts. She received a letter from her mother who died as a murder suspect 15 years ago, and made herself a promise to prove her mother’s innocence. Because Yuriko was arrested based on her childhood friend Takatsuki Tsubaki’s statement, she hates him. She is direct and does not shrink in the face of adversity. She speaks so passionately about traditional Japanese sweets which she loves very much and that bemuses the people around her.

Yokohama Ryusei as Takatsuki Tsubaki
The son and heir of the traditional Japanese sweets shop Kogetsuan. He aims to take over Kogetsuan and make it loved even more by customers. In order to break off a marriage arranged by his mother, he proposes to Hanaoka Nao on the very day he meets her at a traditional Japanese sweets contest. He does not realise that she is the young girl who was his childhood friend at the shop 15 years ago. He looks cool and seems to have no regard for other people but he has strong feelings for traditional Japanese sweets and the shop. He has not received any affection from his mother and grandfather and is actually very lonely. That is why he is not good at expressing his love.

Nakamura Yuri as Okura Yuriko
Hanaoka Nao’s mother. A traditional Japanese sweets maker who made sweets that warmed people’s hearts. When Nao was 5 years old, she started work and live at Kogetsuan. 15 years ago, she was arrested as a suspect in the murder of Takatsuki Itsuki. She collapsed while under interrogation and passed away.

Suzuki Nobuyuki as Takatsuki Itsuki
Takatsuki Tsubaki’s father. The previous master of Kogetsuan. He was a kind and serious man. He was also a very excellent traditional Japanese sweets maker. 15 years ago, he was stabbed by someone and he was discovered by Tsubaki as he was dying.

Mizuki Arisa as Takatsuki Kyoko
Takatsuki Tsubaki’s mother and the female proprietress of Kogetsuan. The daughter of one of the three main families from Kaga. She caught the eye of Takatsuki Sojuro and became the wife of his son Itsuki. After her husband’s death, she spent her life protecting Kogetsuan’s reputation and grooming their only son to be a worthy heir. She loves beautiful things and is very proud and refined. On the other hand, she is vindictive and the type who is scariest when crossed.

Sano Shiro as Takatsuki Sojuro
Takatsuki Tsubaki’s grandfather and the master of Kogetsuan. He has a strong sense of mission to protect the long-standing business. His health deteriorated after his son’s death and he tends to take to his bed. He is icy towards his grandson.

Takasugi Mahiro as Jojima Yusuke
An apprentice who has just joined Kogetsuan. He is a biddable and cheerful young man. He and Hanaoka Nao hit it off right away and they gradually grow closer as they give each other encouragement.

Kishii Yukino as Haseya Shiori
Takatsuki Tsubaki’s fiancee. The third daughter of the family that runs Haseya, one of the best traditional Japanese inns in the country. Although she is reserved and has low self-esteem, she is a direct young woman with a backbone. But she also has a rather careless side.

Yamazaki Ikusaburo as Takigawa Kaoru
He suddenly appears in front of Hanaoka Nao with a letter from her mother. A handsome and fashionable man who wears stylish Japanese traditional clothing. He is always easygoing and mysterious but he gets Nao out of hot water.

Theme Song
Aka no Doumei by Tokyo Jihen

This blog contains information and musings on current and upcoming Japanese dramas but is not intended to be comprehensive.
View all posts by jadefrost →
This entry was posted in NTV, Summer 2020 Dramas and tagged Hamabe Minami, Mizuki Arisa, Sano Shiro, Watashitachi wa Douka Shiteiru. Bookmark the permalink.