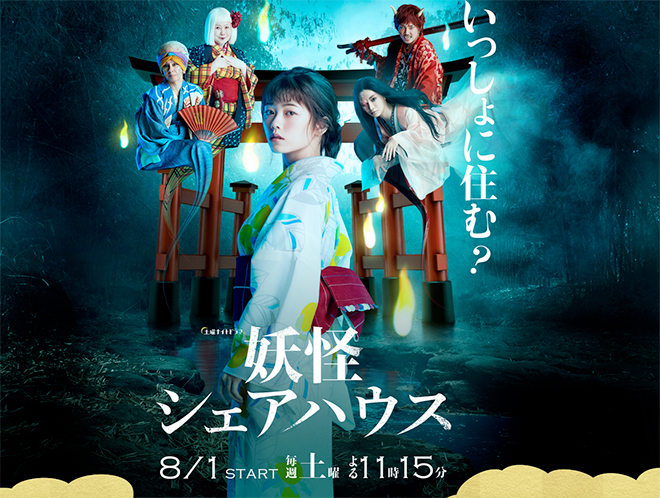 Story
Pursued by debt collectors, Meguro Mio flees a residential neighbourhood while dragging along a suitcase. She heads to the apartment of her boyfriend Okuzono Kentaro to seek help. But Kentaro is with a woman and tells Mio to leave as if she is a nuisance. Mio has only just learned that he has been two-timing her and worse of all, she comes second. In the first place, she is now in debt because of him. Mio fears getting on the wrong side of people and lives by reading situations. There is nothing in particular that she wants to do with her life. She does clerical work at a company where she got a job. While considering an office romance, marriage and childbirth someday, she met the fashionable and handsome Kentaro. However, he is downright good-for-nothing. He talks her into paying money for their dates and even for the antique watches that are his hobby. In the end, she even takes responsibility for the mistakes he made at work after he dangles the promise of marriage. Mio not only gets fired from her job and saddled with debt, she is also driven out of her house. After losing everything, she is even forsaken by Kentaro. As Mio collapses on the sidewalk in despair, she is helped by a woman called Iwa. When she wakes up in the shared house where Iwa lives, the occupants of the place listen to the details of her situation with sobs but there is something peculiar about them. They let her sleep in an empty room that night. However, she awakens in the middle of the night and when she peeks into the living room, she sees ghosts! These extremely nosey ghosts butt in and do away with the problems and troublesome people that Mio faces in excessively radical ways.

Characters
Koshiba Fuka as Meguro Mio
She is trusting, earnest and resilient. But she lacks self-esteem. She has an extreme fear of being disliked by people and the only thing she is good at is reading the situation. Because she does not want to worry her parents too much, she always tells them that she is faring well no matter what happens. She has no particular goal in life. Although she got a job at a chemical manufacturer, she does not find her work rewarding and has been thinking about an office romance followed by marriage and childbirth. However, the men she falls in love with are ultimate losers. She gets cajoled into lending them money and ends up in debt.

Matsumoto Marika as Yotsuya Iwa
The Oiwa-san that everyone knows in well-known ghost story, Yotsuya Kaidan. She is actually a ghost with a good heart and she picks up Meguro Mio because she is caring by nature. When she takes on a human form, she works as a nurse. She was betrayed by her husband Iemon and resents that she was disfigured by poison. However, she refused to accept the situation meekly and believed in paying back what he did to her. She has a tendency to be extreme in love. Unable to forgive Iemon’s betrayal because she loved him with all her heart, she put a deadly curse on him. She is usually exceptionally kind but when she gets angry she is very terrifying. She is a woman with extreme emotions – worrying excessively about Mio and raging at philandering men.

Maiguma Katsuya as Sakai Ryo
A very popular handsome guy who loves alcohol and women. Although he is a slightly raucous drunkard, he is full of righteousness and will not tolerate cowards. He became a ghost because of the blaze of resentment released from the love letter of a woman who died pining for him. He looks scary but he is in fact kind to women. He has an eye for genuine antiques and works at an auction company in this present world. He has no interest in a young girl like Meguro Mio and thinks she needs to work harder to wrap men around her finger and make a fresh start.

Iketani Nobue as Warabe Utako
She may look like a young woman but she is a household deity. Although she is a spirit that settles in houses and warehouses, she now takes care of everyone as the “mother” of the ghosts living in the shared house. She frequently makes use of words from the Edo period and is good at preparing meals using recipes from that era. She is easily moved to tears and cannot stop crying once she starts. She sings traditional nursery rhymes with strange lyrics when it is needed.

Mikata Ryosuke as Minaoka Yuzuru
The new chief priest of Aranami Shrine located next to the share house, and the landlord of the shared house. Despite his appearance, he is a descendant of an exorcist but his exorcism skills are somewhat lacking. He gets pushed around at the house and does odd jobs to get pocket money. As the only person who knows the risk of Meguro Mio crossing the boundary between ghosts and humans, he worries about her and tries to chase her out of the shared house quickly even though he is rather condescending towards her.

Daito Shunsuke as Harashima Hibito
He used to work for a big publisher but was shunted off to be the CEO of its small editorial production subsidiary for some reason. An unemployed and penniless Meguro Mio ends up working for him. He was harsh at the interview, shouts at her when she starts work and makes her do chores. However, he rescues Mio from her predicament and becomes someone she can rely on.

Okura Koji as Numata Hiyo
He is a ghost who slips in and out of the houses of people who are busy. He smokes tobacco, sips tea and acts carefree. He used to live off villagers’ memorial services for the dead as a deity of ponds and marshes but now he is a lawyer and management consultant. Even though he loafs on the job, he never loses because of his art of succeeding in life.

This blog contains information and musings on current and upcoming Japanese dramas but is not intended to be comprehensive.
View all posts by jadefrost →
This entry was posted in Summer 2020 Dramas, TV Asahi and tagged Yokai Sharehouse. Bookmark the permalink.