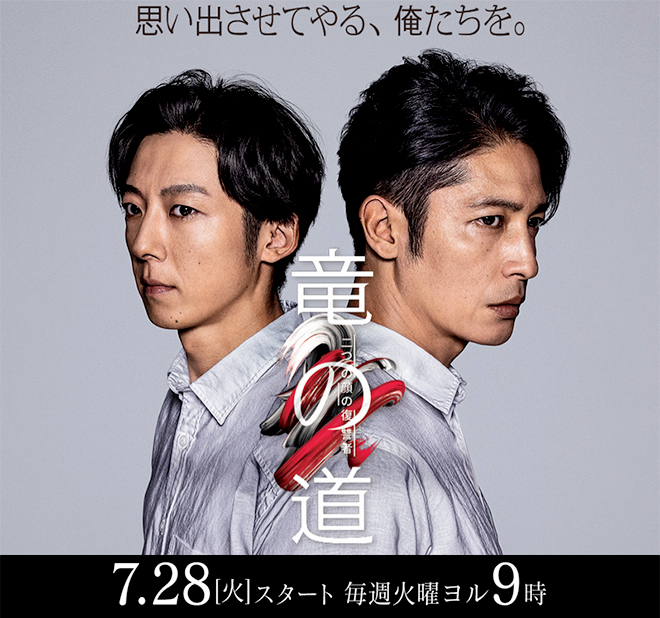 Story
In Fukuoka in 1997, the twin brothers Ryuichi and Ryuji were adopted by the Yoshies, a couple who ran a small transportation company, shortly after they were abandoned at birth by their biological parents. After that, their adoptive parents had a daughter Misa and the family of five got along well. However, when the two brothers turned 15, their parents were subjected to hostilities by Kirishima Express, a transportation company led by Kirishima Genpei who planned to expand his business nationwide. They were saddled with debt and ended up taking their own lives. Seeing the despicable and ruthless way in which Kirishima drove their adoptive parents into a corner, Ryuichi and Ryuji vowed revenge on this man. Seven years later, Ryuichi fakes his own death in a fire. Meanwhile, Ryuji goes back to using his surname at birth and joins the Ministry of Land, Infrastructure, Transport and Tourism which oversees transportation companies. Several months later, Ryuichi appears in front of Ryuji after taking someone else’s identity and becoming a different person through plastic surgery. He is now involved in the underworld. However, the fact that he is alive is kept a secret even from Misa and the brothers begin their revenge by digging for information around Kirishima and his company. They eventually get hold of dirt on the company but … …

Characters
Tamaki Hiroshi as Yabata Ryuichi/Saito Kazunari
The editor at a company that publishes gossip magazines. His true purpose is to get underworld information and connections as well as money. He and his younger twin brother Ryuji were abandoned shortly after birth and adopted by the Yoshies. However, their adoptive parents were driven to their death by Kirishima Genpei. After that, he faked his death, stole someone’s identity and changed his face, staking everything on vengeance against Kirishima. Although he wishes for Ryuji and Misa’s happiness above all else, he is capable of doing anything for revenge.

Takahashi Issei as Yabata Ryuji
A high calibre bureaucrat with the the Ministry of Land, Infrastructure, Transport and Tourism. He vowed revenge against Kirishima Genpei together with his older brother Ryuichi and joined the ministry which has oversight of the transportation sector including Kirishima Express. The two of them wait for an opportunity to strike at Kirishima from opposing positions. He has gained the confidence of both his superiors and colleagues but his cunning side has been devising all sorts of schemes in order to carry out revenge on Kirishima. He is devoted to Misa but his feelings for her have started to go beyond that of siblings.

Matsumoto Honoka as Yoshie Misa
Yabata Ryuichi and Ryuji’s adopted sister. Her parents died when she was 5 years old but she does not have many memories of that time. She also believes Ryuichi is dead. She is going into elementary school teaching with the support of Ryuji who is the only family she has left. Despite the complicated environment, she has become a woman with fortitude just as Ryuichi had taught her as a child.

Endo Kenichi as Kirishima Genpei
The CEO of the transportation company Kirishima Express. He built a small transportation company in Hiroshima into a large company on a national scale using aggressive tactics in a dog-eat-dog world, creating many victims including the Yoshies. He does not care for his family and employees and because he is authoritarian, there is endless unhappiness around him. He makes use of his connections in business, politics and the underworld in a bid to expand his business further. He drove the Yoshies to their death but he does not even remember it.

Saito Yuki as Kirishima Fuyuko
Kirishima Genpei’s virtuous wife. Her marriage to Kirishima was a political union. She goes along with whatever her arrogant husband says and is treated harshly by her own daughter Mayumi, but no one knows her mind.

Saigo Teruhiko as Sonemura Hajime
The chairman of a large gang with an overwhelming power in the underworld and ties with political and business circles. He stands out from the average gangster with a mix of compassion and ruthlessness and begins to take an interest in Yabata Ryuichi.

This blog contains information and musings on current and upcoming Japanese dramas but is not intended to be comprehensive.
View all posts by jadefrost →
This entry was posted in Drama Digest, Fuji TV, Summer 2020 Dramas and tagged Endo Kenichi, Ryu no Michi, Takahashi Issei, Tamaki Hiroshi. Bookmark the permalink.

1 Response to Ryu no Michi ~ Futatsu Kao no Fukushuusha