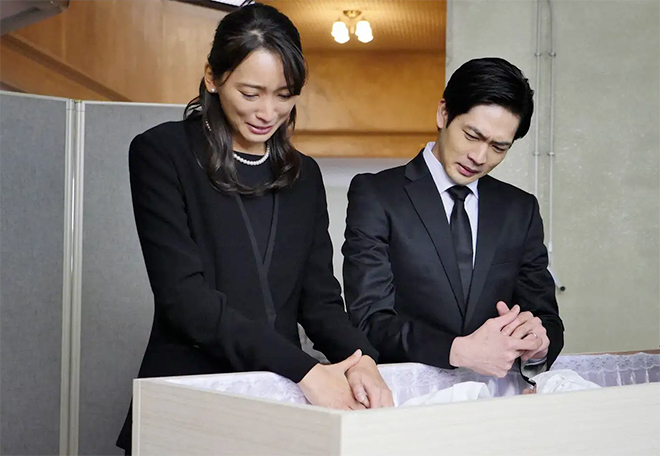 Shimi
Story: Miura Azusa’s (Hirose Alice) family runs a cleaning shop. One day, a mysterious woman (Seki Megumi) dressed entirely in black strolls into the shop. She wants them to get rid of the chocolate stains on her T-shirt. While the chocolate can probably be removed immediately, the stains will be difficult. In the meantime, the stains start to take the shape of human faces and Azusa’s father Goro (Miyakawa Ichirota) suddenly dies. Seeing the situation at that moment, Azusa gets the feeling that her parents have been hiding something from her. When she confronts her mother Yasuko (Yamaguchi Kaori), she learns that her father committed a murder in the past in order to save a friend and this was covered up. Then she discovers that she was also personally involved in this incident. There is an unexpected development in the story. What will Azusa’s fate be?
Cast: Hirose Alice, Miyakawa Ichirota, Yamaguchi Kaori, Seki Megumi

Moenai Oyaji
Story: Matsuda Haruka (Anne) is a doctor who works hard. Her father Toru (Yamada Meikyo) has just passed away and she comes to the crematorium to be with her family. Haruka’s younger brother Koichi (Matsushita Kohei) is slightly bitter that she is issuing instructions about work on her mobile phone while she is beside the grieving family. The situation changes just as their father’s body is cremated. It turns out that he cannot be burned. Even though everything has been burned, the body remains. An employee (Minagawa Sarutoki) at the crematorium suggests that he might have some regrets and the extended family struggles to figure out a possible reason. Even when they think they have solved it and try to cremate the body again, it still will not burn. Haruka feels resigned and is about to return to the hospital where she works, but a long-hidden fact concerning Haruka comes to light. Will they be able to cremate her father’s body in the end?
Cast: Anne, Matsushita Kohei, Moriya Kanna, Yamamoto Michiko, Yamada Meikyo, Minagawa Sarutoki

Mitsu no Negai
Story: Wakabayashi Kazuya (Ito Hideaki) is a man who lives in a big, luxurious house with his incredibly beautiful wife (Sawai Miyu). One day, he is having lunch with his beloved wife in the garden when she unexpectedly disappears. Wakabayashi immediately calls the police and an investigation is about to begin when his phone rings all of a sudden. His wife has been kidnapped and her kidnappers demand 500 million yen in exchange for her release. However, when the police begin actual questioning, Wakabayashi’s behaviour somehow seems suspicious. Although he is unusually fixated on his wife, he has absolutely no information about her. He neither knows her maiden name, hometown nor her family’s contact information. Just as the police start viewing him with suspicion, Wakabayashi talks about bizarre incidents related to his discovery of a lamp five years ago. What kind of mystery behind this kidnapping incidents and will Wakabayashi be reunited with his wife in the end?
Cast: Ito Hideaki, Matsukado Yohei, Sawai Miyu, Takito Kenichi

Haishinsha
Story: Akagi Ryota (Shirasu Jin) is the young assistant director of a TV station’s informational programme. He is tired of being overworked every day and vents his frustration by using his status as an assistant director to occasionally stream trivial material live. However, the number of views do not grow very much and he keeps getting scathing comments. Among them is a comment that says “Shall I teach you how to create content that will go viral?” along with a url. Akagi clicks on the url in spite of himself and sees footage of the underground carpark at the TV station where he currently works. As he watches it in confusion, someone who is streaming this footage live is shown attacking security personnel with a knife. Furthermore, Akagi realises that this person is slowly approaching him. He freaks out and desperately tries to escape but … …
Cast: Shirasu Jin

This blog contains information and musings on current and upcoming Japanese dramas but is not intended to be comprehensive.
View all posts by jadefrost →
This entry was posted in Summer 2020 Drama Specials, TV Tokyo and tagged Anne, Hirose Alice, Ito Hideaki, Yo ni mo Kimyouna Monogatari Series. Bookmark the permalink.