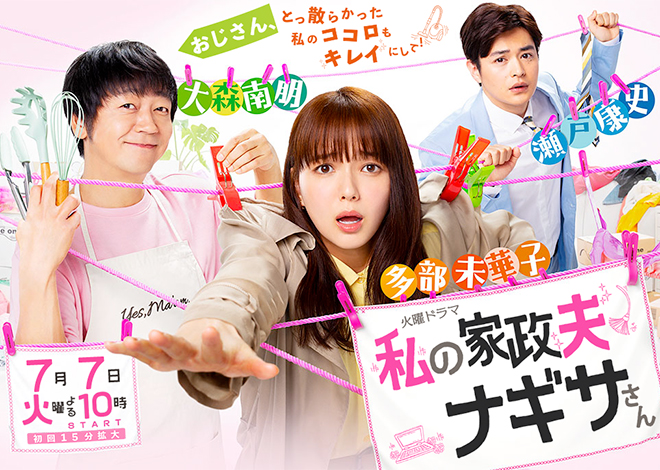 Story
Aihara Mei, a young career woman around thirty who works as a medical representative for a pharmaceutical company, is more competent than anyone at work but has no energy for dreaded household chores. On the night of her 28th birthday, an unfamiliar middle-aged man called Shigino Nagisa wearing an apron shows up all of a sudden when she comes back to her untidy apartment. He turns out to be a super housekeeper who perfectly handles all housework such as cooking, cleaning and washing. Mei unexpectedly ends up hiring him as her housekeeper and begins to find comfort and warmth in his presence even though she hates the idea of having a male stranger in her house. Meanwhile, Tadokoro Yuta, a medical representative for a rival pharmaceutical company, shows up. This is quite a predicament for Mei who is a high achiever and has been unbeatable in her job. Feeling anxious about Tadokoro who has gained the confidence of customers with an approach that is different from hers, she lets her competitiveness and wariness show. Nevertheless, he quickly gets close to her and she finds even her heart stirred up because of him.

Characters
Tabe Mikako as Aihara Mei
A medical representative who does sales for the pharmaceutical company Tenpozan Pharmaceutical. She hates to lose and has always been the top in sales since her third year with the company. She is considered to have a perfect life both at work and in private by the people around her. But she is actually indifferent and inapt at things other than work. Because she is terrible with housework, things are strewn all over her untidy apartment. Even though she believes that she has to do housework, have a romance and look for a marriage partner, she keeps putting them off because she devotes all her time to work. However, her encounter with the housekeeper Shigino Nagisa leads her to start thinking about her life and happiness.

Seto Koji as Tadokoro Yuta
A medical representative working for a foreign pharmaceutical company called Arnold Pharmaceutical. He is like a prince with his perfect looks and personality. He has become a little famous as an extremely outstanding medical representative within the industry because he is good at his job too. A sincere and smooth talker who has great credibility with doctors and customers, he has a friendly manner and is willing to openly exchange information even with employees from rival companies. He transfers to do sales in the same area as Aihara Mei and they keep encountering each other at hospitals and clinics. They quickly grow close and this stirs her up.

Omori Nao as Shigino Nagisa
A super housekeeper who works for NTS Clean House, a housekeeping service provider. Although it is unusual for a 50-year-old man to be a housekeeper, he remains its most requested housekeeper. He takes pride in his work which supports customers’ lives and perfectly handles all housework such as cooking, cleaning and washing. He is a person of few words but a brief comment from him is all it takes to put customers at ease because of his modest and gentle personality and reassurance he gives combined with his experience in life. He is unexpectedly hired by a busy Aihara Mei and gives her warmth and peace of mind.

Takahashi Maryjun as Suyama Kaoru
Aihara Mei’s good friend and colleague. She is not a medical representative but an expert in ailments and pharmaceutical products. A cheerful and assertive person who does not hide anything. She loves handsome men and her interests are beauty and matchmaking parties, and she is working hard at searching for a marriage partner.

Kusakari Tamiyo as Aihara Midori
Aihara Mei and Yui’s mother who is a cheerful and active woman in her 50s. However, she is also terrible with housework. She was affectionate though strict with her daughters’ education to ensure they would have good jobs and lives in the future. However, she still does not realise that she unknowingly put a lot of pressure on her older daughter Mei with her approach to education and her words.

This blog contains information and musings on current and upcoming Japanese dramas but is not intended to be comprehensive.
View all posts by jadefrost →
This entry was posted in Spring 2020 Dramas, TBS/MBS and tagged Omori Nao, Seto Koji, Tabe Mikako, Watashi no Kaseifu Nagisa-san. Bookmark the permalink.

1 Response to Watashi no Kaseifu Nagisa-san