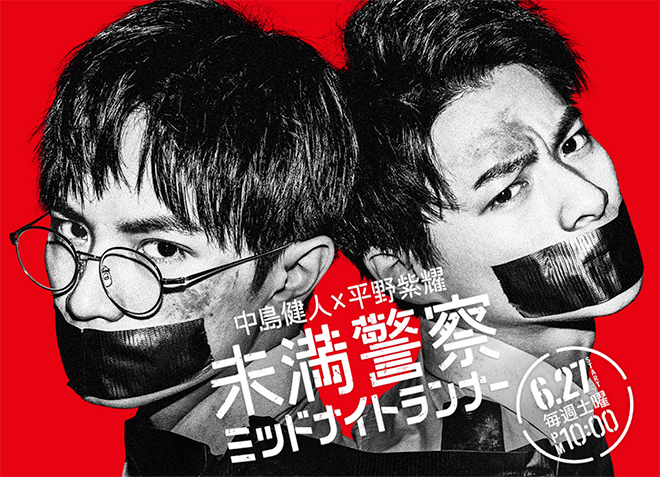 Story
A girl called Miku who has burns on her hands and feet comes to a police box asking for help. At that moment, a family of three are found electrocuted to death in a house and two detectives Yanagida Shinpei and Inanishi Yui rush to the scene. On the day of the police academy’s enrolment three months later, Honma Kai has his hair cut at the infirmary after a meeting with the instructor Katanozaka Yuzuru and assistant instructor Oikawa Ranko. He tells the hairdresser to leave it as long as possible and even checks whether the pair of scissors has been disinfected. While Honma is reluctantly having the haircut, he meets Ichinose Jiro who is seated in the chair next to him. Ichinose cheerfully announces that he entrusting the hairdresser with the haircut and his hair is shorn to a short length. The two of them discover that they are roommates when they move into the male dormitory. They begin a hard life at the police academy along with other cadets striving to become police officers. Meanwhile, Yanagida visits Katanozaka, who has a background as a profiler, to enlist his assistance in investigating the family’s death. Katanozaka goes to meet Miku who is the only that survived. Honma and Ichinose’s friendship gradually deepens as they go through gruelling training together. What the two of them lack in practical experience, they make up with the knowledge obtained through lessons at the academy as well as their youth and enthusiasm. They become the best buddies who make up for each other’s deficiencies. One day, the two of them are peeping at Kaede, a beautiful woman in a second-floor aquarium shop opposite the dormitory, from their window. A man pulling a suitcase shows up at the shop and they see him beat her up. Honma quickly takes out his smartphone and is about to make an anonymous report when Ichinose jumps down from the window and heads over to the shop to save Kaede. Although Honma is stunned by Ichinose’s sudden actions, he considers what he can possibly do. Using his phone, he checks up on the couple who own the aquarium shop and the search results give him pause. He hurriedly calls Ichinose on his phone and urges him to come back. However, Ichinose has already set foot in the shop. Kaede creeps up behind him with a high voltage electrical rod … …

Characters
Nakajima Kento as Honma Kai
A serious A-student who is a cadet at the police academy. He failed to get a job and used to live on part-time work. Feeling like he is living on the edge, he set his mind on becoming a police officer. He is the intellectual type who places emphasis on theory. He has always been overly conscious about the people around him and spent too much time thinking about things, and this backfired on him. However, as he comes face-to-face with cases, his analytical and observational skills develop and his skills at profiling began to blossom. He might seem like he does not care but he will not give up on people in need.

Hirano Sho as Ichinose Jiro
A cadet at the police academy who wishes to become a police officer and fulfil his late brother’s dream. He is the emotional and physical type. A fearless fighter whom even people with martial arts experience will dodge because of his boundless physical strength. Although his somewhat goofy way of speaking and thinking confuses the people around him, he is an honest, kind-hearted guy. Because it is in his nature to swing into action before he thinks, he ends up getting entangled in cases even though his intention is to help people who are in trouble.

Kichise Michiko as Oikawa Ranko
An assistant instructor at the police academy whose foremost concern is rules. She is primarily in charge of practical training. She coaches the cadets on the art of self-defence and building up their physical strength. A merciless instructor who speaks to the cadets in a stern tone, she is full of righteousness and will not allow someone to be left injured.

Harada Taizo as Yanagida Shinpei
A detective with Kanagawa Prefectural Police’s Daikoku Police Precinct. Katanozaka Yuzuru’s peer and good friend. He is an old-fashioned and passionate man who is not good at talking.

Nakamura Yuri as Inanishi Yui
A detective who is Yanagida Shinpei’s partner. She is a feminist and sometimes talks down Yanagida who has an old-fashioned mindset but she respects him as a detective. There are times when she hits it off with Oikawa Ranko and also times when they clash.

This blog contains information and musings on current and upcoming Japanese dramas but is not intended to be comprehensive.
View all posts by jadefrost →
This entry was posted in NTV, Spring 2020 Dramas and tagged Harada Taizo, Iseya Yusuke, Miman Keisatsu. Bookmark the permalink.