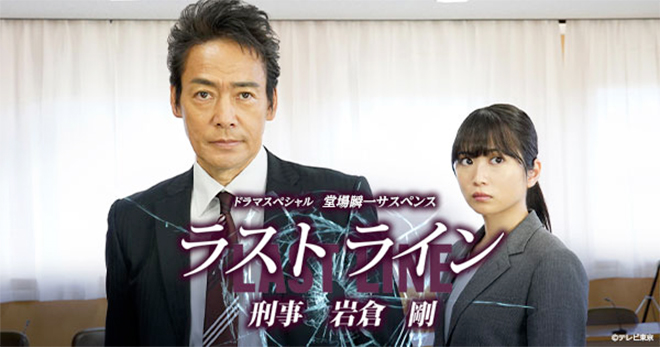 Date: From 8.00 p.m., 30 June 2020
Scriptwriter: Terada Toshio (Doctor X Seasons 2 – 5, Mayonaka Panya-san)
Director: Motohashi Keita
Cast: Murakami Hiroaki, Shida Mirai, Katsumura Masanobu, Taguchi Hiromasa, Ishibashi Renji, Ito Shiro, Ashina Sei, Sera Masanori, Satoi Kenta, Tsuji Kazunaga, Dronz Ishimoto, Shiraishi Shunya, Ishida Houshi, Yamashita Yorie, Tanaka Yoji, Hamatsu Takayuki, Torii Miyuki
Synopsis: Veteran detective Iwakura Tsuyoshi (Murakami Hiroaki) still has 10 years to go until he hits retirement age. Just before he turns 50, he is transferred from the Tokyo Metropolitan Police Department’s First Investigative Division to Minami Ota Police Precinct. On that same day, Mihara Yasuo (Tsuji Kazunaga), an elderly man living alone in the precinct’s jurisdiction, is murdered. Iwakura joins the investigation with a rookie detective Ito Ayaka (Shida Mirai) who used to work at a police box. Unaccustomed to investigations, Ayaka gets nervous at times and is beside herself at others. But she is more cool-headed than Iwakura and has the guts to boldly express her opinion. One day, a newspaper journalist is found to have committed suicide too. Is there a link between these two cases? As incidents happen everywhere he goes, Iwakura is called the “man liked by the god of cases”. He has extraordinary memory to the extent that he is even being pursued by the Tokyo Metropolitan Police Department’s Anti-Cyber Crimes Division which plans to analyse his brain and compile the information into a manual. Although there are times when the investigation task force goes at full speed in the wrong direction, he is the quickest to realise this. With his exceptional memory and intuition, Iwakura plays the last line of defence and puts a stop to it as he takes on the murder cases together with the people around him including Ayaka and Yasuhara Kosuke (Katsumura Masanobu), the head of Minami Ota Police Precinct’s Criminal Affairs Division who was Iwakura’s subordinate back when they were in the First Investigative Division.
Official Website: www.tv-tokyo.co.jp/lastline

This blog contains information and musings on current and upcoming Japanese dramas but is not intended to be comprehensive.
View all posts by jadefrost →
This entry was posted in Summer 2020 Drama Specials, TV Tokyo and tagged Katsumura Masanobu, Last Line, Shida Mirai. Bookmark the permalink.