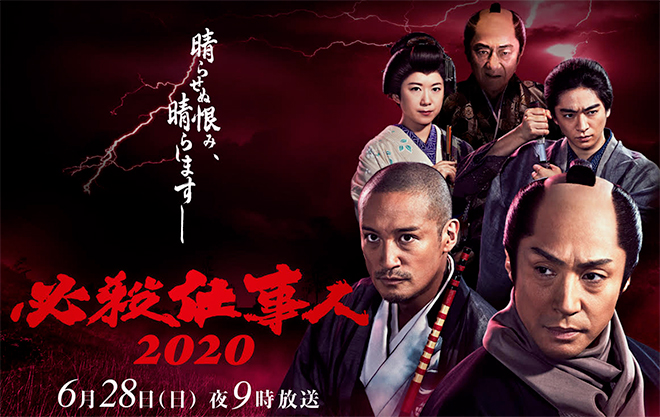 Date: From 9.00 p.m., 28 June 2020
Scriptwriter: Nishida Masafumi (Totone-chan, Jikken Keiji Totori, Yokai Ningen Bem)
Director: Ishihara Shigeru
Cast: Higashiyama Noriyuki, Matsuoka Masahiro, Chinen Yuri, Morikawa Aoi, Daito Shunsuke, Sugino Yosuke, Suruga Taro, Furukawa Rin, Kimura Midoriko, Nakagoshi Noriko, Namase Katsuhisa, Matsuo Toru, Sugimoto Tetta, Wakui Emi, Ichimura Masachika
Synopsis: Scams have been happening frequently in Edo with swindlers disguised as children, cheating parents of their money. Yukawa Korechika (Ichimura Masachika), who is known for several famous judgments, comes to be the magistrate at the Honmachi Magistrate’s Office where constable Watanabe Shogoro (Higashiyama Noriyuki) works. Tagami Seizo (Sugimoto Tetta) also takes up the post as Yukawa’s right-hand man. He goes all out to crack down on the scams. Shogoro happens to rescue a young girl called Tsuyu (Furukawa Rin) who has been committing theft on the streets. He ends up getting emotionally attached to Tsuyu and brings her home. His wife Fuku (Nakagoshi Noriko) and her aunt Ten (Kimura Midoriko) learn that Tsuyu was regarded as a nuisance after being placed in the care of relatives and suggests that they adopt her. Meanwhile, the picture framer Ryoji (Matsuoka Masahiro) visits a teahouse for celebratory drinks with the money he had made from gambling. He meets the good-natured Take (Morikawa Aoi) who is working hard at the teahouse to save money. She says her dream is to open a tavern with her daughter who is currently living apart from her. Take is actually Tsuyu’s mother. As for Ryu (Chinen Yuri), he is working as a gardener and goes in and out of Seizo’s residence occasionally. He gets friendly with Seizo’s son Shinnojo (Sugino Yosuke) who is a social recluse. They go out together one day to take in fresh air. They meet a teacher Mizobata Kuemon (Suruga Taro) on the streets. His impassioned speech moralising the way of life for troubled youth completely captivates Shinnojo and her decides to join Kuemon’s school. But this is opposed by his father. Under Yukawa’s supervision, the magistrate’s office intensifies its crackdown on gangsters in the fight against scams and carries out raids on gambling dens. Although gangsters suspected of masterminding the scams are found to have committed suicide, Shogoro is skeptical that they took their own lives. Even after the crackdown, the scams show no sign of abating. According to information obtained by Ryoji at a gambling den, crooks different from the gangsters seem to have been throwing their weight around lately. They have no code of honour and are frightful in their willingness to do anything for the sake of money. Are they the ones behind the scams? Take who has finally decided to live together with Tsuyu are also about to fall into the clutches of these evil crooks … …
Official Website: www.tv-asahi.co.jp/hissatsu2020
Twitter: twitter.com/hissatsu_series

This blog contains information and musings on current and upcoming Japanese dramas but is not intended to be comprehensive.
View all posts by jadefrost →
This entry was posted in Summer 2020 Drama Specials, TV Asahi and tagged Higashiyama Noriyuki, Hissatsu Shigotonin Series, Matsuoka Masahiro, Nakagoshi Noriko, Namase Katsuhisa, Wakui Emi. Bookmark the permalink.