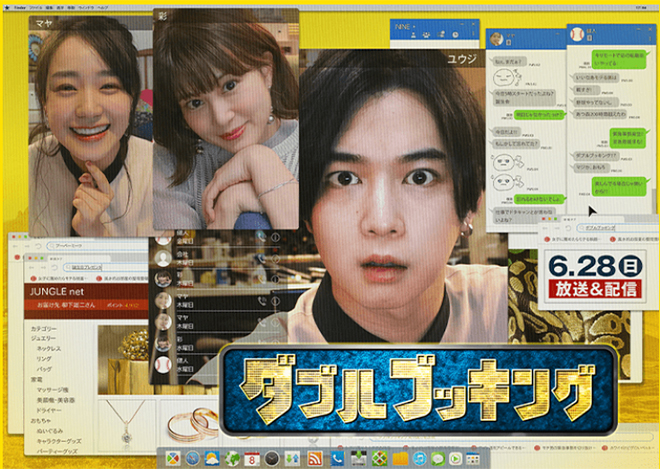 Date: From 1.15 p.m., 28 June 2020
Scriptwriter: Mori Hayashi (Himo Men, Nou ni Sumaho ga Umerareta!, Saki Series)
Director: Mizuno Kaku
Cast: Chiba Yudai, Satsukawa Aimi, Nao, Maeno Tomoya
Synopsis: Yuji (Chiba Yudai) used to be a dull guy in school. But after he started working and launched a start-up, he suddenly became popular. Because of that, he is inexperienced with women although he is good-looking. He has a tendency to instantly like a woman who has fallen for him. Now Yuji is at his wits end just before an online date with his girlfriend. His girlfriends’ names are Aya (Satsukawa Aimi), an office lady, and Maya (Nao), a university student. That’s right! He has been dating two women at a time. Yuji somehow ended up double booking both Aya and Maya for an online date at the same time on the same day. He connects with his two girlfriends through video calls on different computers and goes back and forth between them in an attempt to deceive. He tries to get through this double booking by checking social media, searching the internet and shopping online, opening and closing a series of new windows on his computers in the process. However, in the last three minutes, Yuji finds himself in a terrible situation.
Official Website: www.ntv.co.jp/doublebooking
Twitter: twitter.com/d_b_ntv

This blog contains information and musings on current and upcoming Japanese dramas but is not intended to be comprehensive.
View all posts by jadefrost →
This entry was posted in NTV, Summer 2020 Drama Specials and tagged Chiba Yudai, Double Booking, Satsukawa Aimi. Bookmark the permalink.