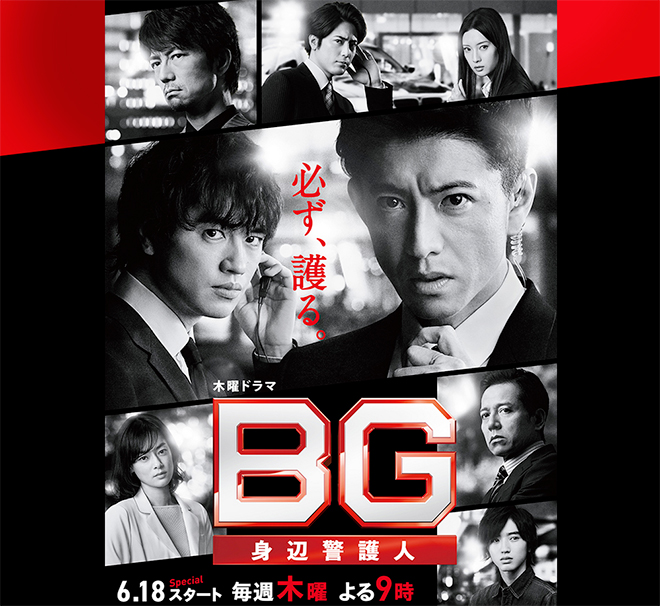 Story
Shimazaki Akira is a bodyguard with private security firm Hinode Security Services’ Personal Protection Division, and gives his all to fulfil his duties. However, he and his colleagues Takanashi Masaya, Suganuma Mayu and Sawaguchi Seitaro now belong to KICKS Guard’s Personal Security Division after the IT company KICKS Corporation, owned by businessman Ryu Koumei, acquired and renamed Hinode Security Services. In a sudden change in policy from Hinode Security Services days, they are to only be involved in guarding VIPs from political and business circles. Akira and the others are guarding a party that a ruling party lawmaker Kuwata Soji has organised for supporters one night. They confront a suspicious man who slipped into venue by posing as a waiter and Akira gets injured. But the team fights the man off through remarkable teamwork and are even commended by the media. Later that night, a letter addressed to Akira is delivered to KICKS Guard. The sender is Matsuno Shinsuke, a former lecturer at Kanto Technological University who is serving time in prison. Three years ago, he was charged with causing a fellow researcher Itami Ayako to suffocate to death in a locked up lab, bashed by the public and eventually sentenced for professional negligence resulting in death. He will finish his prison sentence next month and asks Akira to be his bodyguard after he is released from prison. However, the new division chief Omata Kenzo obeys Ryu unconditionally and is vehemently opposed to providing personal protection for a criminal. Akira goes all the way to the prison in order to directly reject Matsuno. Matsuno strongly wishes to pray for Ayako and apologise to his boss Professor Sakagami for causing trouble and wants Akira to accompany him to the lab. Akira’s feelings waver in the face of Matsuno’s seemingly tormented appeal. Shortly after that, Akira happens to see an improbable sight which triggers his sudden resignation from KICKS Guard. Committed to protecting the vulnerable, he becomes a private bodyguard and agrees to protect Matsuno. However, while guarding Matsuno, Akira begins to find something odd about Matsuno’s behaviour. Meanwhile, Takanashi joins Akira to ask him why he quit. Takanashi’s heart begins to change as they guard Matsuno together. On the other hand, Suganuma and Sawaguchi have chosen to remain with KICKS Guard which now regards Akira and Takanashi with hostility … …

Characters
Kimura Takuya as Shimazaki Akira
A private bodyguard with outstanding skills. After a mistake that he made ended the career of soccer player Kouno Junya, he withdrew from the work of personal protection for a long time. However, he was transferred to Hinode Security Services’s Personal Protection Division and made a comeback as a “new bodyguard”. Hinode Security Services is bought over by an IT company called KICK Corporation and he works at the division even after it became KICKS Guard. Although he accepted the focus on profits and management policy of restricting clients to VIPs from political and business circles, he eventually resigned to become a “shield for the weak” again and makes a fresh start as freelancer. He is divorced and lives with his son Shun. Shun is still going through a rebellious phase and he has been struggling with how to handle him.

Saito Takumi as Takanashi Masaya
A bodyguard who is a former member of the Self Defence Forces. After Hinode Security Services, he worked with Shimazaki Akira at KICKS Guard. He ends up protecting a client together with Akira because he visited him to learn the real reason for his resignation from KICKS Guard. He is curt and unaccommodating as usual but he has a strong sense of duty for his profession. He is in a romantic relationship with Suganuma Mayu now but … …

Mamiya Shotaro as Sawaguchi Seitaro
A bodyguard at KICKS Guard’s Personal Security Division. He had also worked with Shimazaki Akira at Hinode Security Services. He does not think things over and is easygoing. He was a complete newbie but he has matured into a full-fledged bodyguard. Although he is shocked by Akira’s resignation, he ultimately chooses to remain at KICKS Guard. He helps out by introducing work and passing on client information without his company’s knowledge.

Nanao as Suganuma Mayu
A bodyguard at KICKS Guard’s Personal Security Division. He had also worked with Shimazaki Akira at Hinode Security Services. She used had a promising future as a judo athlete and excellent reflexes. She is realistic that being a bodyguard pays better. While she does not particularly agree with the policy of KICKS Guard, she puts this behind her and conforms. Her work performance eventually comes to the attention of the CEO Ryu Koumei … …

Ichikawa Mikako as Kasamatsu Takako
An orthopedic surgeon at Shirayama General Hospital. She has been the doctor contracted by the Personal Protection Division before Hinode Security Services was bought over by KICKS Corporation. She is like a balm for Shimazaki Akira and the others, caring not just for their physical injuries but also listening to their complaints.

Katsumura Masanobu as Omata Kenzo
The head of KICKS Guard’s Personal Security Division. He came from the Tokyo Metropolitan Police Department’s Security Police Division and took over after the death of Murata Goro. His stance on personal protection is completely different to Murata’s. He believes in protecting with the organisation’s strength rather than the heart. He follows CEO Ryu Koumei’s management policy and regards Shimazaki Akira and Takanashi Masaya who have become private bodyguards with downright hostility.

Nakamura Toru as Ryu Koumei
The CEO of the IT company KICKS Corporation. He has an eye on security services for some reason and acquired Hinode Security Services. Born to Chinese and Japanese parents, he boasts remarkable management skills. He places emphasis on business success and believes that clients must only be VIPs from political and business circles in order to raise the status of bodyguards as well as profits. Although he looks like a gentlemanly good guy, he measures people’s lives with money. He does not have a good opinion of Shimazaki Akira and Takanashi Masaya who left KICKS Guard and seems to be plotting something.

This blog contains information and musings on current and upcoming Japanese dramas but is not intended to be comprehensive.
View all posts by jadefrost →
This entry was posted in Spring 2020 Dramas, TV Asahi and tagged BG Series, Katsumura Masanobu, Kimura Takuya. Bookmark the permalink.