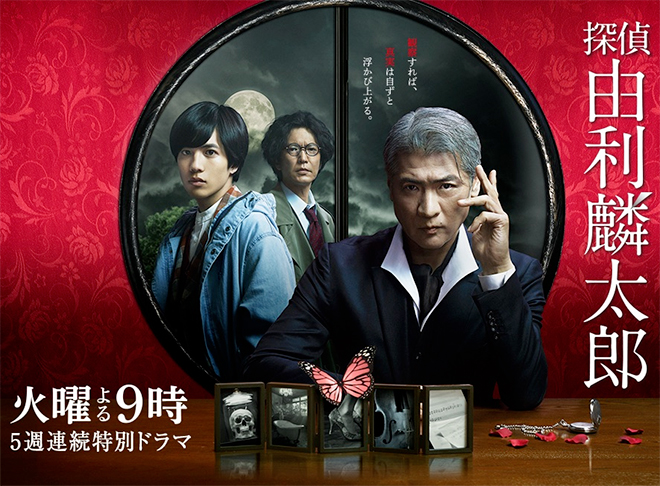 Story
Yuri Rintaro, an outstanding man with a brilliant mind, was the well-known chief of the Tokyo Metropolitan Police Department’s First Investigative Division. However, some case triggered his resignation. After that, he moved to Kyoto where he had spent his student days and based himself in the rooms owned by Hada Satomi who runs an antique shop. Yuri is now active as a criminal psychologist and a “consulting detective” who helps out in investigations at the request of the police. Mitsugi Shunsuke, a young man who aspires to be a mystery writer, serves as his assistant. Shunsuke worships Yuri and runs a website called Yuri Rintaro’s Case Files that records his activities. One day, Yuri receives a message warning of a murder from someone by the name of Hanadokuro. He hurriedly heads to the specified location together with Shunsuke, who fumes at the written challenge. They discover blood dripping from a freezer. Ruriko, the adopted daughter of well-known genetic researcher Kusaka Eizo, has been tied up and confined inside in a bloody state. After confirming that she is still breathing, Yuri calls for an ambulance and rushes to the residence of the Kusakas who own the freezer. He links up with his old friend Inspector Todoroki from the Kyoto Prefectural Police at the house. Shunsuke sees a shadow on the second floor but when they dash up the stairs, they find a down coat in what is believed to be the room of Eizo’s son Eiichi. The coat has so much coagulated blood that suggests fatal blood loss. Then they discover Kusaka with a dagger in his chest in the research lab. Yuri is bothered by a ghastly blood-stained skull placed beside the dead body … …

Characters
Kikkawa Koji as Yuri Rintaro
The former head of the Tokyo Metropolitan Police Department’s First Investigative Division. He is now active in Kyoto as a criminal psychologist. At the same time, he helps out in investigations at the request of the police. He is good at archery even though he has a fear of sharp pointed objects.
He has the appearance of a white-haired gentleman who does not talk a lot but he is a genius in his perceptiveness and reasoning.

Shison Jun as Mitsugi Shunsuke
Yuri Rintaro’s assistant who aspires to be a mystery writer. He worships Yuri and has been running a website called Yuri Rintaro’s Case Files which records Yuri’s activities instead of writing his book. He accompanies Yuri around as his assistant and unexpectedly gets down to the nitty gritty of cases.

Tanabe Seiichi as Inspector Todoroki
A Kyoto Prefectural Police Inspector and an old friend whom Yuri Rintaro spent his university days with in Kyoto. He acknowledges Yuri’s ability to solve cases with his exceptionally keen insight, and asks him to investigate cases. His love for fish-shaped pancake stuffed with red bean is unrivalled and he would show up at murder scenes with a pancake in one hand.

Kimoto Takehiro as Yamagishi Kappei
An editor at a publishing company who is in charge of Mitsugi Shunsuke. He recognises Shinsuke’s skills and introduces him to Yuri Rintaro as a reference for writing his book.

This blog contains information and musings on current and upcoming Japanese dramas but is not intended to be comprehensive.
View all posts by jadefrost →
This entry was posted in Fuji TV, Summer 2020 Dramas and tagged Kikkawa Koji, Shison Jun, Tanabe Seiichi, Tantei Yuri Rintaro. Bookmark the permalink.