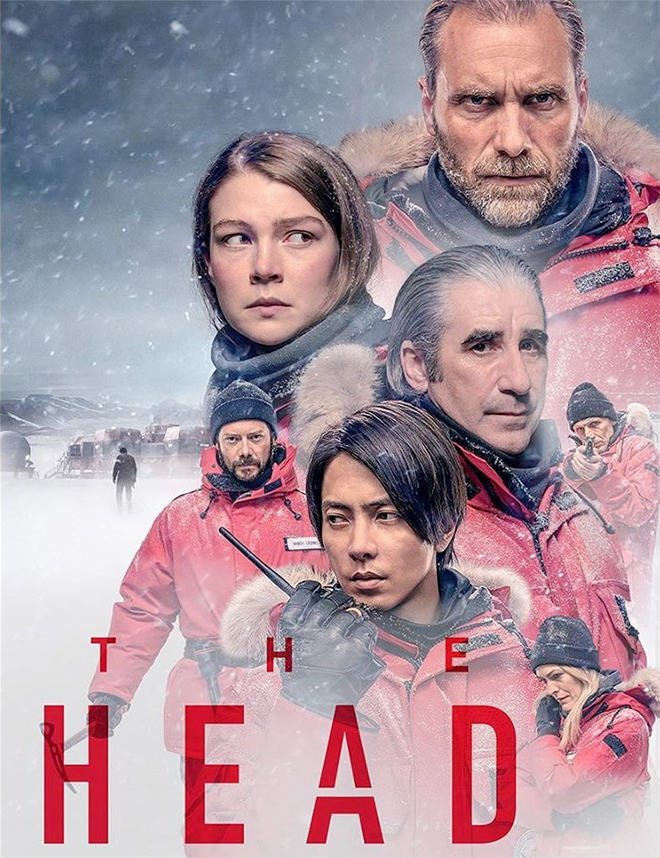 Story
Winter has fallen on the South Pole and the sun will soon disappear for the next six months. A small 10-member team of scientists including world renowned biologist Arthur Wilde will remain at the Polaris VI Antarctic Research Station to continue their research work while the summer team leaves the continent. The commander of the summer team Johan Berg bids his wife Annika, who has been chosen for the winter team, farewell and entrusts the management of the research station to the commander of the winter team Erik Osterland. A young doctor Maggie Mitchell, who is participating in the winter team for the first time, and Arthur’s right-hand man Kobayashi Aki carefully prepare for the long winter. However, in the middle of the six-month winter, communication between the research station and the outside world is suddenly disrupted. When a worried Johan and his colleagues return to the base several weeks later in spring, they are greeted by a terrible scene that turns into a nightmare. Seven of the researchers died violent deaths. A killer is on the loose and Annika is missing. If Johan wants to find her alive, he will have to trust Maggie who is profoundly shaken and apparently the sole survivor from the group … … What happened at the isolated base in those six months?

Characters
Alexandre Willaume as Johan Berg
The commander of the summer team. A mild and kind man. He is tasked with the tough job of running the Polaris VI Antarctic Research Station where a large number of people live and work in an extremely cramped space. He loves his wife Annika dearly and is pained to have to leave her behind at the research station. Contact is lost with the research station after he returns home. When he rushes back, he discovers signs of a terrifying crime. He is forced take swift action in order to locate the missing members before it is too late but … …

John Lynch as Arthur Wilde
A biologist who is held in the highest regard internationally and considered a genius. The research he undertook in Antarctica eight years ago became a legend in both the academic and scientific communities. Resolving to play a role that will bring hope to the efforts to combat climate change, he returns to the Polaris VI Antarctic Research Station and stays behind as a member of the winter team. However, he ends up projecting arrogance in various ways.

Katharine O’Donnelly as Maggie Mitchell
An outstanding young woman who is a doctor. This is her first time being assigned to the winter team at the Polaris VI Antarctic Research Station and the people around her question whether she will be able to survive the winter in Antarctica. Dropped in among the seasoned members of the winter team who understand each other, the young microbiologist Kobayashi Aki is the one she turns to for emotional support. Her feelings for him gradually grows.

Yamashita Tomohisa as Kobayashi Aki
A young microbiologist with a promising future. He is participating in the research team at the Polaris VI Antarctic Research Station for the first time. He has also been chosen to be a member of the winter team and he pursues a doctorate under the biologist Arthur Wilde’s mentorship. He enthusiastically tries to prove his worth every day. He hits it off with the doctor Maggie Mitchell from the start and their love for each other deepens. Although he has a kind hear, he actually has another side to him too … …

Richard Sammel as Erik Osterland
The commander of the winter team. He served in the military and is an extremely tough guy. He loves his team and will do everything in his power to keep them safe. He has special romantic feelings for the nurse Eva Ullman who is also a member of the winter team but … …

Laura Bach as Annika Lundquist
A geneticist and veteran researcher who has been working under the biologist Arthur Wilde for many years. A professional who is passionately devoted to research, she has always put work first. She and the commander of the summer team Johan Berg are married and deeply in love with each other. She has to spend to long winter apart from him because she was chosen as a member of the winter team. However, she suppresses her pain and focuses on her duty.

Álvaro Morte as Ramon Lazarus
The research station’s cook and member of the winter team. Because he loves reading, meditation and philosophy, he has the nature of a misanthrope. To him, the isolated Polaris VI Antarctic Research Station is a safe home and the team members are like family. Because of that, he regularly visits Antarctica. He generally gets along with the team. However, his personality completely changes when he is under pressure. He is actually hiding a big secret.

Sandra Andreis as Eva Ullman
A nurse at the Polaris VI Antarctic Research Station. She has a wealth of experience on ice and loves her work. However, she worries about spending months away from her family. When she detects the escalating romantic feelings that the commander of the winter team Erik Osterland has for her, she attempts to keep it in check but … …

Amelia Hoy as Heather Blake
She is in charge of computers at the Polaris VI Antarctic Research Station. A woman with a wild and bold spirit, she is always optimistic even when a situation is about to go off the rails. This is her first time being chosen for the winter team and she intends to make the most of this opportunity. She loves the outdoors and extreme sports. Work to her is merely getting out in the world and having the best experience of her life.

Tom Lawrence as Miles Porter
A member of the winter team who is in charge of telecommunications. He is pained that he has to live in a civilised world and is one of those maniacs who wish to live out his life on ice. He has participated in missions in Antarctica for the past 15 years. While he has always been a slightly eccentric man even before this, he gets increasingly weird as a result of the long months and years spent on ice.

Chris Riley as Nils Hedlund
The base technician who is in charge of equipment maintenance and repair. He knows the Polaris VI Antarctic Research Station better than anyone else and keeps the place in superb condition. He is a veteran who has done the rounds in Antarctica for many years. He has a bad drinking habit which is often detrimental to interpersonal relationships. To avoid conflict, he is generally on his own. His personality soon gets the better of him … …

This blog contains information and musings on current and upcoming Japanese dramas but is not intended to be comprehensive.
View all posts by jadefrost →
This entry was posted in Hulu, Summer 2020 Dramas and tagged The Head. Bookmark the permalink.