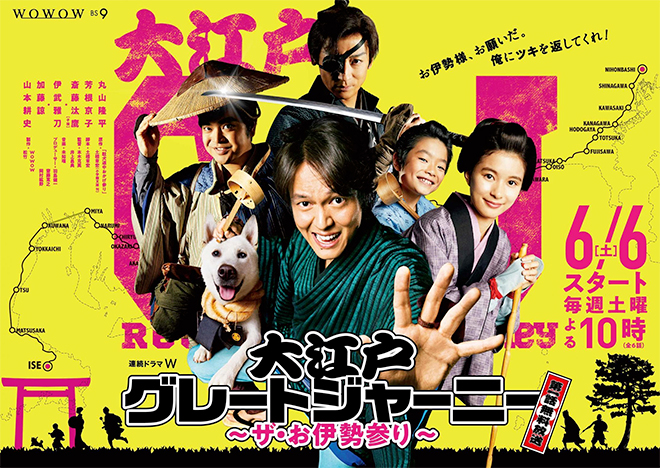 Story
It is the year 1830 when the Ise Grand Shrine’s principal Buddhist statue is put on public view once every 20 years. One day, Tatsugoro, who was once a legendary gambler called Edo’s best, ends up massively in debt at a gambling den in Fukagawa. He has always been alone in this world and relied on his own ability and luck to win. However, he has had none of it lately. On this day, Tatsugoro draws a winning number for the worshippers and sets off on a pilgrimage to Ise Grand Shrine as a tenement house representative. With 10 ryo in travelling expenses contributed by all the residents, and bolts out of the tenement house in high spirits. On the way, Tatsugoro meets the dog Okinamaru which is visiting the shrine on behalf of its master, a young boy Miyoshi who has sneaked out from his place of apprenticeship, and the beautiful but flawed Saya. In an unexpected turn of events, they end up continuing their journey by pretending that they are family. However, Tatsugoro has no idea that he is being pursued by the killer and debt collector, Kikusuke, who is no stranger to the Edo underworld … …

Characters
Maruyama Ryuhei as Tatsugoro
He was once the best gambler in Edo. However, he has now become a debt-ridden loser. He ends up setting off on a pilgrimage to Ise Grand Shrine by chance.

Yoshine Kyoko as Saya
A beautiful but imperfect lady who tried to drown herself. She wants to die one way or another. But she completely changes when she drinks alcohol.

Yamamoto Koji as Kikusuke
A killer and debt collector known to the underworld in Edo.

Nishimura Masahiko as Tokubei
The landlord of the tenement house where Tatsugoro lives. He tries to force Tatsugoro, who has not paid the rent for some time, to leave.

This blog contains information and musings on current and upcoming Japanese dramas but is not intended to be comprehensive.
View all posts by jadefrost →
This entry was posted in Drama Digest, Summer 2020 Dramas, WOWOW and tagged Oedo Great Journey, Yamamoto Koji. Bookmark the permalink.