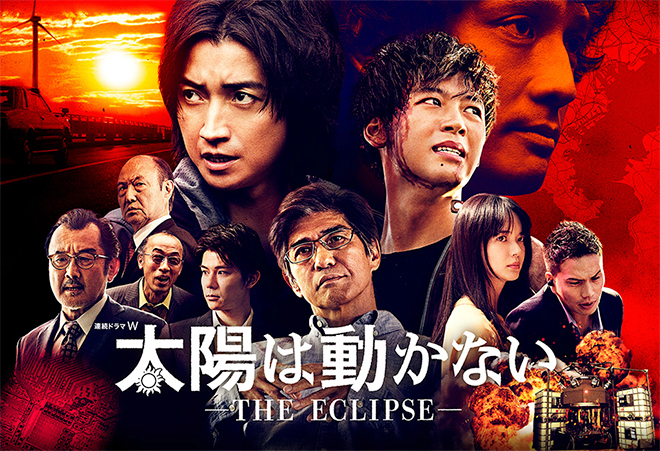 Story
Takano Kazuhiko is an agent for AN News, an intelligence organisation that uses a small news distribution service as its front. Together with a new agent Taoka Ryoichi, he infiltrates the construction site where the world city exposition is scheduled to take place three years later. There are various plots brewing over the selection of the site. They are playing a role in this intelligence warfare at the request of political fixer Chusonji Nobutaka and his secretary Nagashima Toru. However, the location is blown up right before their very eyes by someone. Takano and Taoka begin investigating the mastermind on the instructions of their boss Kazama Takeshi. With the help of a fellow agent Yamashita Ryuji who smuggled himself into Hong Kong, they discover that a powerful Chinese company attempting to interfere with Chusonji’s agenda, was behind the explosion and the existence of a former agent of AN News who was hired there. Meanwhile, Ochiai Kaori, a staff of a non-profit organisation, suspects political intrigue behind the incident and tries to get close. Even Kirino Kenjiro, the son of the former prime minister and a second-generation lawmaker who seems to have no connection to the matter, starts getting active behind the scenes. It soon becomes apparent that there are far greater interests that go beyond holding the exposition … …

Characters
Fujiwara Tatsuya as Takano Kazuhiko
An agent who belongs to the intelligence organisation, AN News. He is calm and collected even in a crisis, and resourceful. A small bomb has been implanted in his heart.

Takeuchi Ryoma as Taoka Ryoichi
A new agent with the intelligence organisation, AN News. Takano Kazuhiko’s buddy. He is still inexperienced. Like Takano, he has a small bomb has been implanted in his heart.

Sato Koichi as Kazama Takeshi
The leader of AN News. A former news journalist who vanished under mysterious circumstances.

Tabe Mikako as Ochiai Kaori
A staff of a non-profit organisation. She has been pursuing Chusonji Nobutaka, a lawmaker of the House of Representatives, due to a past connection.

Ichihara Hayato as Yamashita Ryuji
An agent with the intelligence organisation, AN News, who has penetrated Hong Kong. Takano Kazuhiko’s peer. He looked after Taoka Ryoichi in the beginning.

Ishibashi Renji as Chusonji Nobutaka
A political fixer who was a former deputy prime minister. He asks AN News to identify the mastermind behind the bombing of the world city exposition’s construction site.

Yoshida Kotaro as Nagashima Toru
The first secretary of Chusonji Nobutaka, who was a bureaucrat. The bombing incident makes him burn with ambition once again.