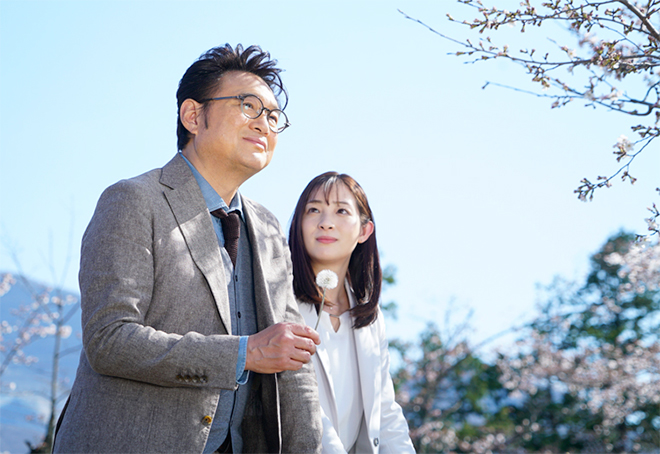 Date: From 9.00 p.m., 17 May 2020
Original Work: Kasai no Hito by Mouri Jinpachi
Scriptwriter: Morosawa Kazuyuki (Gekokujo Juken, Keibuho Sugiyama Shintaro, Nurse no Oshigoto Series)
Director: Inohara Tatsuzo
Cast: Funakoshi Eiichiro, Adachi Rika, Sato Hitomi, Horii Arata, Yamanaka Takashi, Morishita Yoshiyuki, Mochizuki Ayumu, Niiyama Chiharu, Nishioka Tokuma, Kadono Takuzo
Synopsis: Maezaki Family Court is located in a suburban city about an hour away from Tokyo by shinkansen. A newly appointed judge arrives at the court. This man is Kuwata Yoshio (Funakoshi Eiichiro), the rumoured oddball who snubbed career advancement after turning down a transfer to Tokyo due to his attachment to the family court. On the day that Kuwata takes up his new post, he shows up carrying a huge plant on his back. Higuchi Hinako (Adachi Rika), a legal apprentice who wants to become a lawyer, and the probation officers are astounded. Kuwata says he happened to pass by a garden where trees were being felled and he decided to take this plant because he felt sorry for it. He immediately starts to plant the tree in the small garden within the court’s compound while everyone watches him in a daze. On top of that, Kuwata keeps making statements during mediation that are quite uncharacteristic for a judge and this throws the probation officers off their stride. Meanwhile, Sasaki Kenzo (Nishioka Tokuma) who is an important person locally, is murdered and a 19-year-old teenager by the name of Tachibana Akira (Mochizuki Ayumu) turns himself in. He is turned over to Maezaki Family Court. In fact, Akira had committed assault close to a year ago and there was a trial in the family court. However, Tobari (Yamanaka Takashi) believed in the boy’s nature and decided not to punish him in order to give him a chance to mend his ways. Feeling disappointed, Tobari is keen to take a hard line this time. However, Ikegami (Kadono Takuzo) who heads the family court, assigns another probation officer called Okamoto (Sato Hitomi) and this causes discord at the family court. Akira admits to breaking into Sasaki’s residence because he wanted money to enjoy himself and ended up killing Sasaki after a scuffle. But Kuwata has doubts about the young man’s statement about breaking off the branch of a loquat tree in the garden when he intruded. Although the family court places emphasis on swiftly handling cases, Kuwata tries to get to the heart of the problems people face. Many people treat him as an oddball because of that but … …
Official Website: www.tv-asahi.co.jp/kasai

This blog contains information and musings on current and upcoming Japanese dramas but is not intended to be comprehensive.
View all posts by jadefrost →
This entry was posted in Spring 2020 Drama Specials, TV Asahi and tagged Kasai no Hito. Bookmark the permalink.