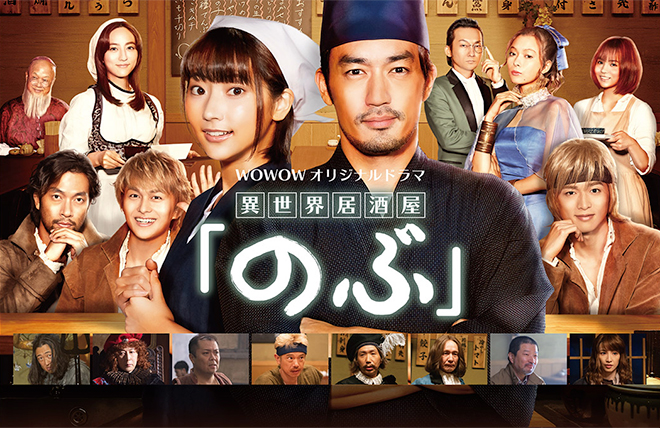 Story
Izakaya Nobu is located in a deserted alley in Kyoto. Despite its humble appearance, its front entrance is mysteriously connected to Aiteria, a parallel universe that looks like medieval Europe. The head chef Yazawa Nobuyuki and the cheerful and sharp waitress Senke Shinobu originally started the joint in Aiteria for the people of this world. A cold beer called Toriaezu Nama which did not exist in Aiteria and cuisine became popular and Nobu gradually began to do brisk business. Customers from all walks of life including soldiers, craftsmen, merchants and nobles come to Nobu for a casual drink. They are greeted with delicious food and alcohol the likes of which they have never seen and they start to relax as they are released from the weariness of their day and enjoy themselves to the fullest.

Characters
Otani Ryohei as Yazawa Nobuyukii
The head chef of Izakaya Nobu who is devoted to food and a true artisan. He used to be the chef of the traditional Japanese restaurant Yukitsuna.

Takeda Rena as Senke Shinobu
A waitress and the poster girl of Izakaya Nobu. The daughter of the owner of the traditional Japanese restaurant Yukitsuna.

Shirasu Jin as Nicholas
A guard of the ancient city of Aiteria. Hans’ colleague who is well-informed on all sorts of things. He becomes a regular at Izakaya Nobu.

Kobayashi Yutaka as Hans
A guard of the ancient city of Aiteria. He visits Izakaya Nobu at the Nicholas’s invitation and is enchanted by the food.

Abe Shinnosuke as Berthold
The captain of the guards of Aiteria and superior of Hans and Nicholas. Hermina’s husband.

Oshinari Shugo as Jean
A spy from the Eastern Kingdom of Oiria. He has come to Aiteria to survey its true state of affairs.

Namioka Kazuki as Gernot
A tax collector with a seat on Aiteria city council. He loves Senke Shinobu’s Napolitan spaghetti.

Sasai Eisuke as Bachschouf
The president of the city council, he wields immense power.

Yagi Arisa as Eleonora
The leader of the water transportation guild, Harpies Shanty, and a member of the city council.

Watabe Ryuhei as Godhardt
The leader of Water Dragon’s Scale, Aiteria’s largest guild, and a member of the city council.

Ogoe Yuki as Reinhold
The leader of Golden Willow’s Boat and a member of the city council.

Kajihara Zen as Damian
Baron Brentano’s attendant. He is a cunning person.

Hayama Kana as Hildegard
The daughter of a viscount. Johan Gustav’s niece. She was brought up pampered and is slightly wilful.

Sagiri Seina as Leontine
A beautiful female mercenary who has come from a foreign land.

This blog contains information and musings on current and upcoming Japanese dramas but is not intended to be comprehensive.
View all posts by jadefrost →
This entry was posted in Spring 2020 Dramas, WOWOW and tagged Isekai Izakaya Nobu Series, Otani Ryohei. Bookmark the permalink.