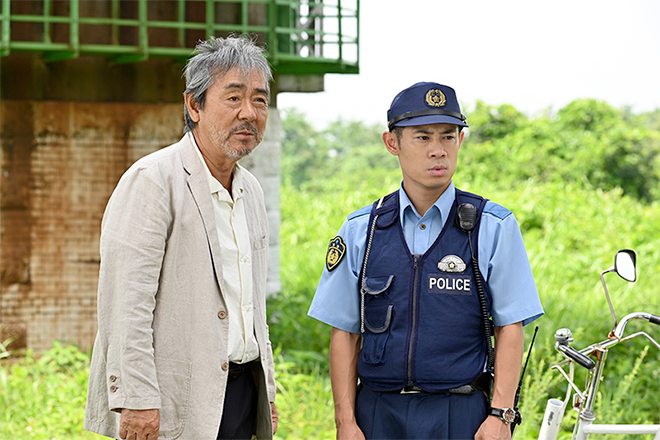 Date: From 9.00 p.m., 10 May 2020
Original Work: Banka no Himawari: Bengonin Gomi Jinsuke by Fukuzawa Tetsuzo
Scriptwriter: Yoshimoto Masahiro (Iyasaretai Otoko, Onna no Naka ni Tanin, Kageriyuku Natsu)
Director: Hijikata Masato
Cast: Ito Atsushi, Kaname Jun, Fukuda Saki, Sato Kanta, Hotta Akane, Saito Satoru, Moriguchi Yoko, Terao Akira
Synopsis: Nitta Masato (Ito Atsushi) works at a Musashino Chuo Police Precinct police box. He realises that an elderly woman living on her own has been targeted in a phone scam involving a relative pretending to be in distress, and arrests a university student called Tachibana Kohei (Sato Kanta) who shows up to collect the cash. Kohei was approached about this “part-time job” by a female stranger and readily accepted it because he was in need of money. A crime is a crime even though he is not aware that he is an accomplice. After learning that Kohei is doing the “part-time job” to support life with his sick mother, Nitta asks the lawyer Gomi Jinsuke (Terao Akira) to defend Kohei. Although Gomi grumbles that the work Nitta brings to him is often trouble, he accepts the case. As a result, Kohei is quickly released on bail. However, they are not able to get to the mastermind. Kohei starts working again for a worried Matsusaka Shino (Moriguchi Yoko), the owner of a small restaurant where he used to be a part-timer. One night, he catches sight of Machida Mikako (Hotta Akane), the woman who got him involved in the phone scam. Hearing from Kohei that Mikako works at a night club under a former yakuza (Ono Yutaka), Nitta starts to investigate on his own in the belief that he can bust the group of swindlers even though Gomi refuses. However, Nitta’s investigation is quickly exposed and he is given a warning. Then another phone scam happens. This time, the elderly woman who was cheated dies after taking her own life. As Kohei’s own father was driven to suicide two years ago when he was cheated by a real estate company, he gets angry with the police for not taking action before the woman killed herself. After finishing his part-time job late one night, Kohei comes to a decision and heads to the hostess bar. He follows Mikako when she leaves the place after it closes. The next morning, Nitta is contacted about the discovery of a murdered woman at an disused factory. He learns that Kohei has been taken into custody as a murder suspect … …
Official Website: www.tv-asahi.co.jp/hakujitsu2

This blog contains information and musings on current and upcoming Japanese dramas but is not intended to be comprehensive.
View all posts by jadefrost →
This entry was posted in Spring 2020 Drama Specials, TV Asahi and tagged Fukuda Saki, Hakujitsu no Karasu Series, Terao Akira. Bookmark the permalink.