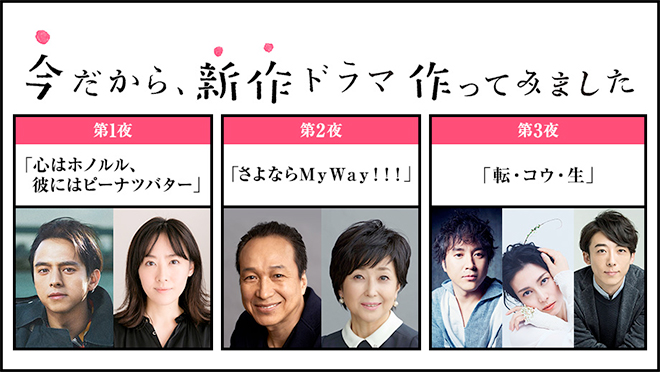 Kokoro wa Honolulu, Kare ni wa Peanut Butter
Story: Kanbayashi Goro (Mitsushima Shinnosuke) and Morimoto Chiaki (Maeda Aki) are engaged. They have been in a long distance romance because Goro relocated for work. Then Chiaki learns that the biggest event of her life – their wedding ceremony in Hawaii which was supposed to take place in spring – has to be cancelled due to the declaration of a state of emergency. She frets about things not working out and feels desolate since they cannot even meet on dates. Despite these feelings, the only way Chiaki and Goro can communicate now is through video chat, and they get all lovey dovey. However, they begin to drift apart due to differences in opinion. The gulf between them becomes obvious and grows until they eventually break up?!
Cast: Mitsushima Shinnosuke, Maeda Aki
Scriptwriter: Yajima Koichiro (Joshi Kousei no Mudazukai, Kenkou de Bunkatekina Saitei Gendo no Seikatsu, Aino Kekkon Soudanjo)

Sayonara My Way!!
Story: Shishido Michio (Kohinata Fumiyo) has just lost Maiko (Takeshita Keiko), his wife of 40 years to stroke. Nevertheless, he endures his grief and carries on conscientiously doing his work at the insurance agency that he runs. One day, Michio receives a video call on the computer he uses for work. When he looks at screen, he sees Maiko who is supposed to be dead. Things get more shockingly bizarre. Maiko thrusts divorce papers at him through the screen! Why has she appeared as a ghost in front of him?
Cast: Kohinata Fumiyo, Takeshita Keiko
Scriptwriter: Iketani Masao

Ten Kou Sei
Story: As Shibasaki Kou (Shibasaki Kou), Muro Tsuyoshi (Muro Tsuyoshi) and Takahashi Issei (Takahashi Issei) stay home and self-isolate, their desire to meet grows stronger. For some reason, this desire to meet causes something strange to happen. Shibasaki swaps bodies with Muro. This time, Takahashi even swaps bodies with her cat, creating utter chaos and confusion. Wanting to meet someone is not supposed turn out like this! How will the three of them be able to return to their original bodies?
Cast: Shibasaki Kou, Muro Tsuyoshi, Takahashi Issei
Scriptwriter: Morishita Yoshiko (Dakara Watashi wa Oshimashita, Gibo to Musume no Blues Series, Tenno no Ryoriban)