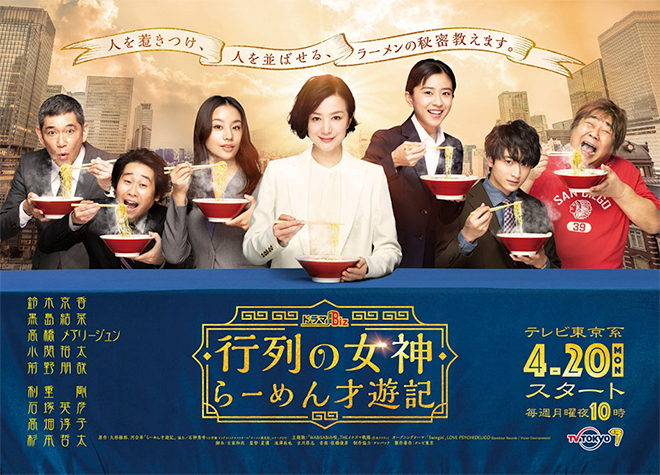 Story
Serizawa Tatsumi, the charismatic founder of the popular ramen chain Seiryubo which gets long queues day after day, plays a leading role in the world of ramen. She is now taking on the challenge of rescuing ramen shops facing difficulties as well as elevating and promoting Japan’s ramen culture through Seiryu Planning, a food consultancy specialising in ramen that she started. One day, her subordinate Natsukawa Aya discovers a female customer who has not touched the new ramen dish for the month. The young woman criticises the flavour of the ramen that Tatsumi created, calling it somewhat lacking. After returning to Seiryu Planning, Aya explodes in anger about this customer who dismissed Serizawa’s new creation. While her colleagues are soothing her, that young woman Shiomi Yutori arrives for an interview with the company. She says she was so moved by ramen that she ate for the first time half a year ago and hoped to join the company. Then she nonchalantly declares to Tatsumi that she can enhance the ramen dish even though she is an amateur when it comes to ramen. Serizawa decides to let her give it a shot. The ramen that Yutori serves is so good that it even satisfies Serizawa. However, everyone is certain that she will not be hired because she put Serizawa in a bad mood. A short while later, Yutori calls to say that she found a ramen shop that needs assistance. Presuming that she will be hired, she has undertaken the assignment posing as an employee. Seiryu Planning’s manager Kawakami Kengo has no choice but to go to that ramen shop. When he hears from the couple who own the shop that they are unable to pay the 30,000 yen retainer fee, he tries to turn them down. But Serizawa gives him an unexpected answer over the phone. Her terms are harsh – Yutori will be put in charge of the consulting and she will be hired if she can produce results within a week … …

Characters
Suzuki Kyoka as Serizawa Tatsumi
The CEO of Seiryu Planning. She is the creator of Ramen Seiryubo which is called Japan’s best ramen shop. A cool, charismatic person with a sharp tongue. At work, she is very harsh on the people around her as well as herself. However, she actually watches over the growth of her employees, supporting them from behind the scenes. She has a deep sense of duty and empathy. Although she always gets annoyed with Shiomi Yutori, there is a deeper reason for that.

Kuroshima Yuina as Shiomi Yutori
She hopes to join Seiryu Planning. A spontaneous person who is unable to read situations, she arrives late for her interview and declares in front of the chefs that the ramen is not delicious. Although she is a complete novice when it comes to ramen, she excels in cooking. Once she eats a mouthful, she is able to identify the ingredients and create a new ramen dish that even surprises Serizawa Tatsumi. Her dream is to have more people eat delicious ramen.

Takahashi Maryjun as Natsukawa Aya
An employee at Seiryu Planning. She admires Serizawa Tatsumi and joined the company with the wish of mastering ramen. Her goal is to have her own shop someday. She is frank and strong-minded. She seems irritated by Shiomi Yutori and is hard on her.

Ishizuka Hidehiko as Arisu Ryo
An elusive ramen critic. It is said that he will be wherever there is delicious ramen. He is on familiar terms with Serizawa Tatsumi and often shows up at Seiryu Planning. He has the best sense of taste and most extensive knowledge of ramen.

Sugimoto Tetta as Kawakami Kengo
A manager at Seiryu Planning who understands Serizawa Tatsumi well. A mild-mannered man with common sense, he has a thankless job and often has to cover for Serizawa and Shiomi Yutori.

Theme Song
Wabisabi no Uta by The Inazuma Sentai

This blog contains information and musings on current and upcoming Japanese dramas but is not intended to be comprehensive.
View all posts by jadefrost →
This entry was posted in Spring 2020 Dramas, TV Tokyo and tagged Gyouretsu no Megami, Suzuki Kyoka. Bookmark the permalink.