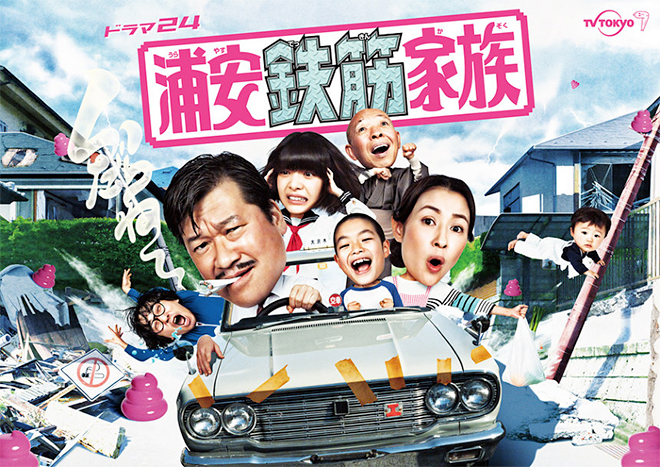 Story
The Osawagi family lives in Urayasu, Chiba Prefecture which is very near Tokyo. The man of the house, Daitetsu, is a tobacco-loving taxi driver. He lives with his wife Junko, their four children – only daughter Sakura who seems the most normal in the family; eldest son Haruo who is into anime and inventions, second son Kotetsu who is Urayasu’s silliest elementary school student; and cute third son Yuta, a little genius who takes after his mother – and grandfather Kintetsu. A preposterous and extreme bunch that always “lives to the fullest” every day with their neighbours, any trivial matter such as eating out or a child developing a fever can become a riot beyond imagination once they get involved. One day, Daitetsu is given a sentence to stop smoking at a family hearing by Junko. The whole family including Sakura who wants money for dates with her boyfriend Hanamaruki, gang up to make Daitetsu quit. However, this turns into a confinement, chase and huge commotion. Will they be successful in their strategy to get him to give up smoking?

Characters
Sato Jiro as Osawagi Daitetsu
The Osawagis’ pillar of strength. He is perfunctory and sloppy.

Mizuno Miki as Osawagi Junko
Osawagi Daitetsu’s wife and the family’s secret pillar of strength. She is good at cooking and dotes on her children. Although she is usually ladylike, no one can stop her when she gets out of control.

Kishii Yukino as Osawagi Sakura
The Osawagis only daughter. She seems the most normal in the family but is blinded when is comes to her boyfriend Hanamaruki. She is a realistic girl and yet will give up everything to protect her relationship with Hanamaruki.

Honda Chikara as Osawagi Haruo
The Osawagis eldest son. A hardcore enthusiast of anime and inventions, he is the family’s self-appointed watchman. No one in the family knows how many times he has failed the yearly university entrance examination.

Sakata Toshio as Osawagi Kintetsu
Osawagi Daitetsu’s father. He loves his grandchildren and does his best for the family too. Although he has back problems associated with old age, he still shows unbelievable reflexes. His interest is listening to rock music.

This blog contains information and musings on current and upcoming Japanese dramas but is not intended to be comprehensive.
View all posts by jadefrost →
This entry was posted in Spring 2020 Dramas, TV Tokyo and tagged Mizuno Miki, Sato Jiro, Sometani Shota, Takito Kenichi, Urayasu Tekkin Kazoku. Bookmark the permalink.