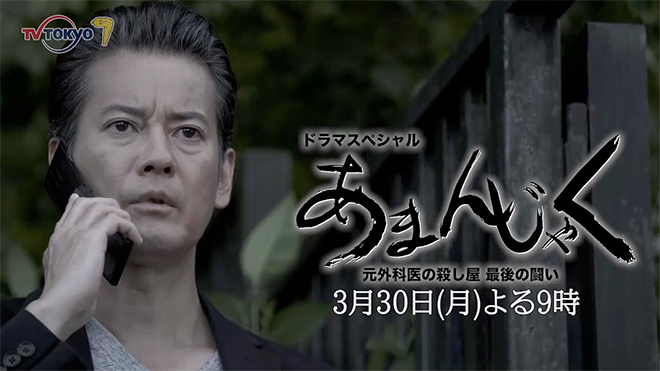 Date: From 9.00 p.m., 30 March 2020
Scriptwriter: Izumisawa Yoko (Dairenai, Itsumade mo Shiroi Hane, Lunch no Akko-san)
Original Work: Amanjaku by Fujimura Izumi
Cast: Karasawa Toshiaki, Kimura Tae, Hashizume Isao, Noguchi Goro (guest star), Oba Kumiko (guest star), Yamanaka Takashi (guest star), Otaka Akira (guest star), Shibamoto Yuki (guest star), Nakamura Shunsuke (guest star), Kaneda Akio (guest star), Matsumoto Wakana (guest star)
Synopsis: Orikabe Takao (Karasawa Toshiaki) was an outstanding surgeon at a university hospital. Now he is a hit man who accepts hit jobs through his partner, the lawyer Yokokura Yoshimi (Hashizume Isao), and kills off wicked people that cannot be prosecuted by law. On this day, his client is Munemura Masashi, a former chef. The target is an unscrupulous food critic called Minami Masaaki. Minami set a trap for Munemura’s daughter Ako and sexually assaulted her. As a result, this drove her to commit suicide. Meanwhile, there have been a streak of bizarre cases where hearts and brains have been extracted from the dead bodies of brilliant people. While Orikabe moves ahead with his plan to assassinate Minami, he gets another hit job. Sugiyama Ema says she has been introduced by his ex-girlfriend Kaji Mutsuko (Kimura Tae). She wants him to kill her violent husband. Then Orikabe happens to meet his former teacher Nawa Junzo (Noguchi Goro), who used to be an excellent neurosurgeon. Nawa is worried about his wife Chiyono (Oba Kumiko). She is suffering from an incurable illness. The unanticipated incidents continue as if manipulated by the hands of fate. This is soon linked to an unexpected great evil existence. A huge organisation is misusing science that goes beyond the realm of humanity in an attempt to change the world. Orikabe makes a decision to pit himself against this strong enemy in a confrontation that he has never had before in order to protect the lives his children which have been targeted by the organisation. However, at the same time, he realises that he will have to put his own life on the line in this fight.
Official Website: www.tv-tokyo.co.jp/amanjyaku

This blog contains information and musings on current and upcoming Japanese dramas but is not intended to be comprehensive.
View all posts by jadefrost →
This entry was posted in Spring 2020 Drama Specials, TV Tokyo and tagged Amanjaku Series, Hashizume Isao, Karasawa Toshiaki, Kimura Tae. Bookmark the permalink.